Spartans struggle with ball security, lose to Rutgers 38-27 in opener 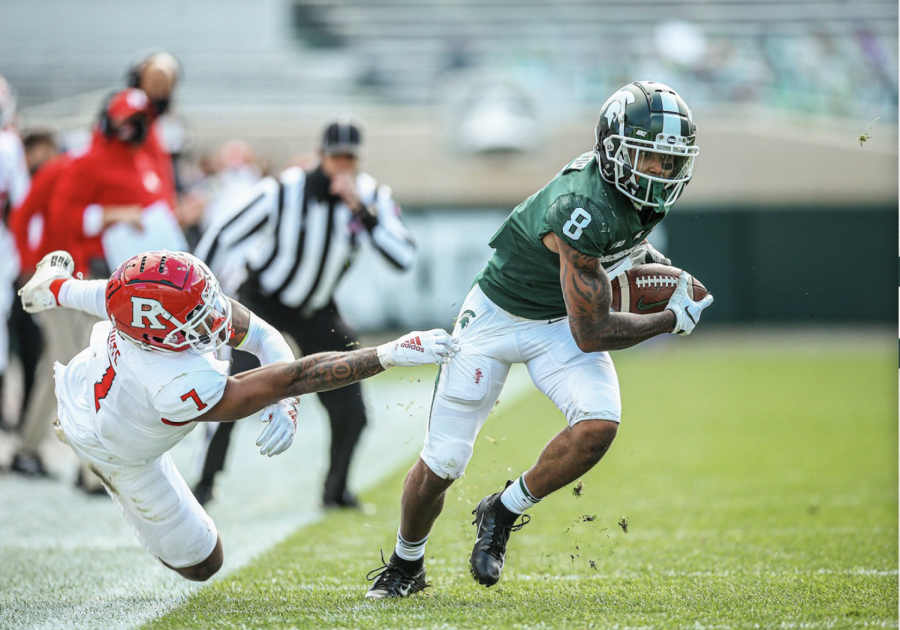 The Mel Tucker era could not have gotten off to a more disastrous start, as the Michigan State Spartans suffered a disappointing 38-27 loss to Rutgers on Saturday in Spartan Stadium. The offense fell apart, turning the ball over seven times in the game, including five lost fumbles.

No matter what progress the Spartans had, they could not get out of their own way, and repeatedly shot themselves in the foot. After allowing a touchdown on the opening possession, Jayden Reed, the All-American wide receiver transfer from Western Michigan, fumbled on the first offensive play of the season for MSU. It was all downhill from there.

On the following possession, quarterback Rocky Lombardi was strip-sacked on third down following a missed blitz pickup by Connor Heyward, and Rutgers recovered on the MSU 1-yard line. Rutgers was able to punch it in, and MSU was down 14-0 just four minutes into the game.

The Spartans were able to answer on their next possession with a 50-yard touchdown pass to Reed, who was a catalyst for MSU’s offense all day, both positively and negatively. Reed led the team in receiving with 11 catches for 128 yards including two touchdowns. However, he had two key fumbles during the first quarter that killed all of MSU’s momentum early in the game and allowed Rutgers to jump out to a 21-7 lead early in the second quarter. Rutgers would add another touchdown before half, making the score 28-13 at halftime.

MSU began the second half with the ball and was driving early before yet another setback. True freshman running back Jordon Simmons, who was MSU’s leading rusher on the day with a whopping 43 yards, fumbled in Rutgers territory, killing another Spartan drive.

On the following MSU possession, the Spartans were held to a three-and-out. On the punt, Michigan State forced a fumble thanks to a massive hit from Chase Kline, and took over on the Rutgers 30-yard line. MSU was able to capitalize on the turnover, and scored on the first play of the possession as Lombardi hit Jalen Nailor on an out-route. Nailor was able to make a defender miss and use his elite speed to reach the end zone… something that was desperately needed in the MSU offense all afternoon. This made the score 28-20, a one-possession game.

MSU was able to get the ball back, and brought it right back into Rutgers territory. The Spartans were faced with fourth-and-3 at the Rutgers 21-yard line, and Tucker decided to keep the offense on the field instead of kicking a field goal to pull within five points. The Spartans called a zone run up the middle with Simmons, which was stuffed, much like any other run MSU had in the game. MSU turned the ball over on downs and killed all momentum of the comeback heading into the fourth quarter.

Rutgers was able to capitalize off of the massive mistake, and added a field goal on the subsequent possession, making it an 11-point game with 12 minutes to play.

Rutgers got the ball back after an MSU three-and-out, and immediately had to punt it back to MSU. On the punt, Nailor signaled for a fair catch before muffing the punt at his shoestrings. Rutgers pounced on the ball and took over on the MSU 26-yard line with 10 minutes to play. The Scarlet Knights added a touchdown after four plays, putting them up by 18 points with seven minutes to play.

The game was all but over at this point, as the three-score lead proved to be insurmountable in that short period of time. Tucker will have a lot to improve upon leading to the biggest game of the year next weekend when the Spartans travel to Ann Arbor to take on the Michigan Wolverines. Lombardi looked promising as the starting quarterback, but will the Spartans be able to hold onto the ball long enough for that to matter?