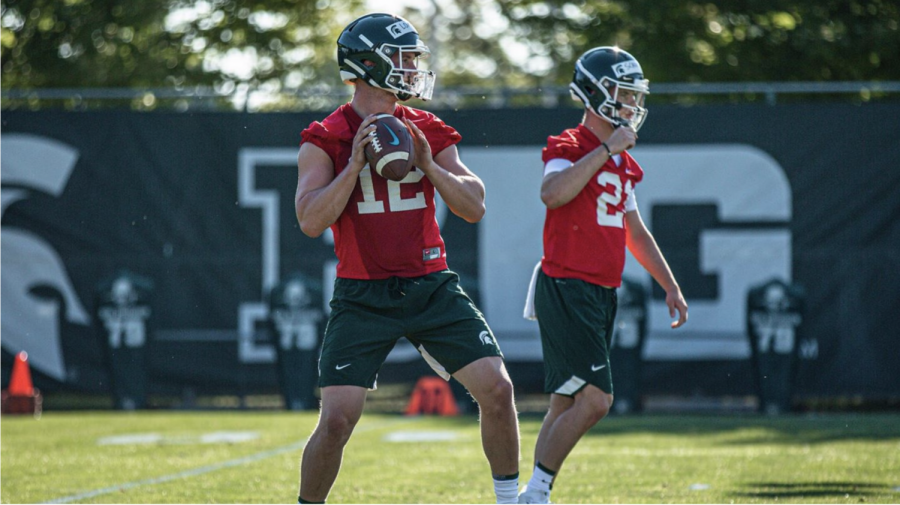 East Lansing- The 2020 Michigan State football season is almost upon us.

As of right now, MSU has not chosen a starting quarterback or middle linebacker for the season opener against Rutgers. The new coaching staff has had limited contact with the team this preseason due to the COVID-19 pandemic and strict Big Ten guidelines. Despite all of this, first-year coach Mel Tucker is optimistic about the team heading into the season opener.

In his weekly press conference, Tucker said the team is well-prepared for the season and is ready for Rutgers on Saturday. He said the team has bought into the team-first mentality that he and his staff have worked to implement.

“The players know that we are process-driven, and the players have bought into that process,” said Tucker. Tucker also mentioned that he wants to reestablish Spartan football as a brand of football that represents discipline, toughness, and physicality in all three phases of the game.

On offense, Tucker said that his offensive philosophy is relatively simple; it involves winning at the line of scrimmage and protecting the ball. He also mentioned that the turnover margin is one of the most, if not the most, critical  parts of the game and that his coaching staff has been preaching ball protection throughout fall camp.

On Tuesday, Tucker gave no inclination as to who would be the starting quarterback come game time. He also said that he would not make a final decision until the full game plan for Rutgers was implemented at practice later on in the week.

The competition for the starting QB role is a four-horse race between senior Rocky Lombardi, redshirt sophomore Theo Day, Payton Thorne and freshman Noah Kim. Kim and Thorne are both young gunslingers who each feature strong arms and good pocket awareness but lack consistent experience at the college level.

Whoever the quarterback is, there is no doubt that the offense and the rest of the team  will be excited to finally hit a different color jersey. Tucker said that the biggest point of emphasis that he has been preaching to the group  is to be overprepared and flexible at all times, regardless of whatever circumstances may arise.

“Football is fundamentally a simple game.; if you are prepared, you will succeed,’’ said Tucker. “ You have to be in the best condition and play fast…Players play fastest when they know what to do. We are trying to make sure that they are prepared as possible when the game starts.”

Saturday will be the culmination of all of the hard work that the players and the first-year staff put in over the shortened preseason. It will be quite the test for Tucker in his first game as a coach, and we will see how prepared the Spartans are and who takes the reigns on offense in a few short days.