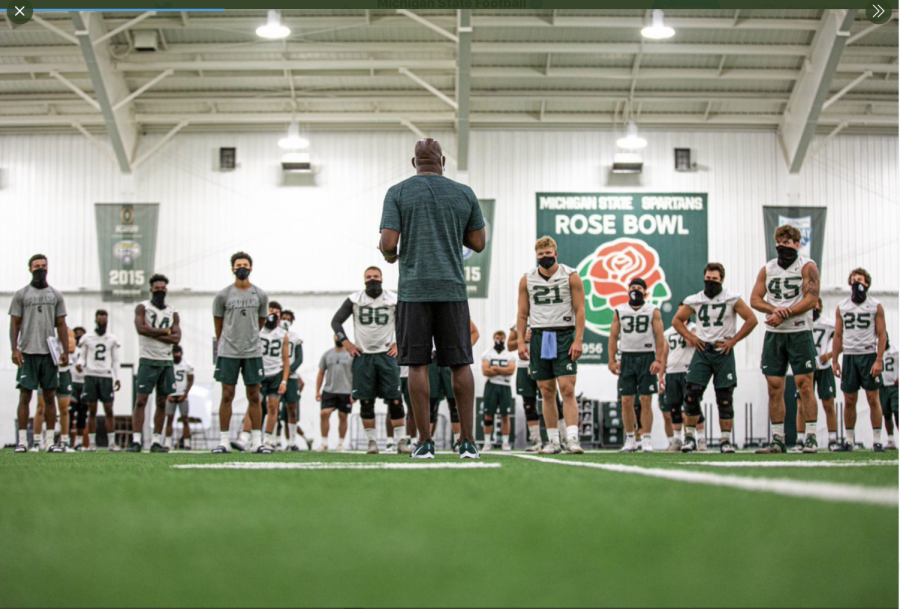 EAST LANSING — With the first game of the season coming up in only a few short days, there are a lot of unanswered questions surrounding Michigan State’s football team. The big question on everyone’s mind is the question of starting quarterback.

During his Tuesday afternoon press conference, coach Mel Tucker reported that he has not picked a starter yet for Saturday’s game against Rutgers. He commented that the group has done a nice job of developing throughout the offseason and that the team has multiple guys who can play the position for MSU. Tucker also said that connecting with offensive coordinator Jay Johnson will be the important thing in deciding who will play quarterback for the Spartans.

Tucker also commented on the versatility of the linebacking group and the ongoing competition on the offensive live. As far as linebackers, Tucker feels he has plenty of guys who are ready to play and thinks that there are multiple guys who can play a few different spots on the defensive side of the ball. The group will be a little short-handed after MSU suspended Luke Fulton and Charles Willekes earlier this week. Tucker also commented on the hard work put in by the big guys playing the offensive line and said that it’s a competition everyday for a starting spot. At the end of the day he wants to build depth at every position, but especially the offensive line.

MSU will also not be releasing a depth chart anytime soon. During a season where any player can be out for multiple weeks at a time due to COVID-19, the starting group could look quite different each week. Tucker said that this season, it is more about a rep chart than a depth chart. Whoever is getting the most work in practice leading up to the game could see the most snaps for the Spartans come game day.

Captains will also be changing each week for the Spartans, as they will have game captains that are chosen by the coaches leading into each game. These captains will rotate depending on who is available to play along with who is playing well in practice. They will have more concrete captains toward the latter half of the season where players will vote on permanent captains for the team.

Coming into a game where both teams have new head coaches, scouting is difficult, but Tucker thinks it’s all about putting the players in the best scenarios to be successful. Tucker emphasized the importance of expecting the unexpected in this first game, and that their team needs to be comfortable being uncomfortable. On-the-fly adjustments will be important to the Spartans this week, and whoever can take care of the football will put themselves in a good position to win.

With no fans in Spartan Stadium, the question of how the Spartans will be able to generate energy came up a few times during the press conference. Tucker didn’t seem too worried about the excitement level going into the first game of the season. Tucker said that the energy in practice has been great and the Spartans just need to take what they have done on the practice field and move it to Spartan Stadium. The team has also been practicing with some pumped-in crowd noise at the volume that the Big Ten will allow for stadiums, along with playing loud music to make the scrimmages feel as close to a game as possible. Tucker said that they’ve had two scrimmages in Spartan Stadium along with one simulated game practicing different scenarios that could occur in any common game.

Tucker said he believes in being neutral with his emotions and decision making on the field on the field. Never letting his emotions get too high or too low but he said he would be lying if he wasn’t excited to step on the field to coach his first game for MSU. He can’t help but smile when thinking about running out of that tunnel.