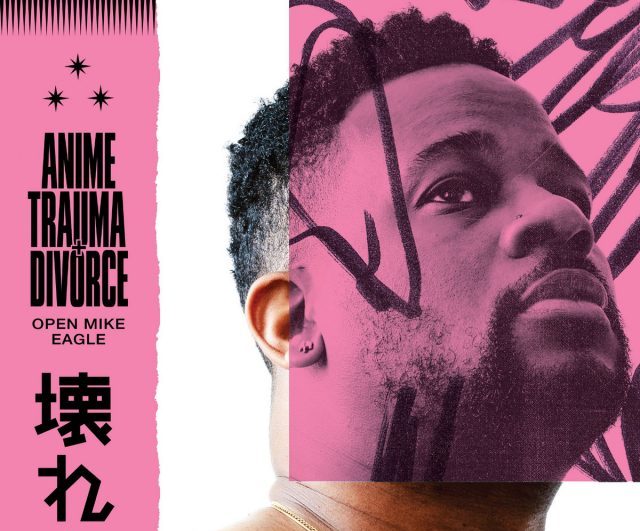 It isn’t until Open Mike Eagle says “ended” for the fourth time on “Everything Ends Last Year,” the seventh track off his newly released album Anime, Trauma and Divorce, that the song actually ends.

When it does end, it does so abruptly. It cuts straight through the momentum of a crescendo of emotion that the song methodically builds up to. However, there’s a couple seconds after the 39-year-old rapper emphatically mutters “ended”, where the song mellows out into a texture of somber piano chords. Here, this amazing album’s fabric of wry humor and introspection shines the strongest.

As the title suggests, Anime, Trauma and Divorce explores expressions of intense grief  through the lens of comic and casual pop culture references. Often labeled as “art-rap,” Open Mike Eagle is known for his unique concentration of darkly funny analyses of complex ideas. While many of OME’s albums are intricate and heartfelt, this is undeniably his most personal yet. It comes at a time when an album like this is relatable for so many.

“There are no metaphors there—the title is all quite literal,” he said in an interview with Bandcamp.

The first three verses on “Everything Ends Last Year” end with “It’s October and I’m tired.” It’s weird that it’s so easy to find yourself screaming those lines at the top of your lungs to a song that’s so hushed, heartfelt and conversational. One of the best parts about Open Mike Eagle’s writing on this song, and album overall, is how he makes deeply personal and individual lyrics sound so familiar to any listener.

Balancing tears with a TV remote and tissues, he weaves seemingly whimsical mentions of anime and other pop culture into vulnerable songs that distill extremely powerful emotions. You don’t know whether to laugh or cry when he says things like “Real talk, I’d rather be Kim Deal’s cannonball” on “Asa’s Bop.”

On “Everything Ends Last Year,” however, the laughter ceases for a moment.  With the absence of humor or the distraction of any references, the exasperated mood that Mike, and everyone else living in 2020 feels, is accentuated and laid bare. This communal feeling of exhaustion makes every new mention of “ended” or “It’s October and I’m tired” feel louder and more profound when it’s actually not changing at all.

So, after the fourth and final mention of “ended,” the album reaches what feels like a deep breath. Those stark, yet soothing piano chords that finish off the song stare into the face of a fatigue that’s familiar to everyone right now. This song may not be what people thought of when saying “at least we’ll probably get good music out of 2020,” but if so, it feels good to be wrong.