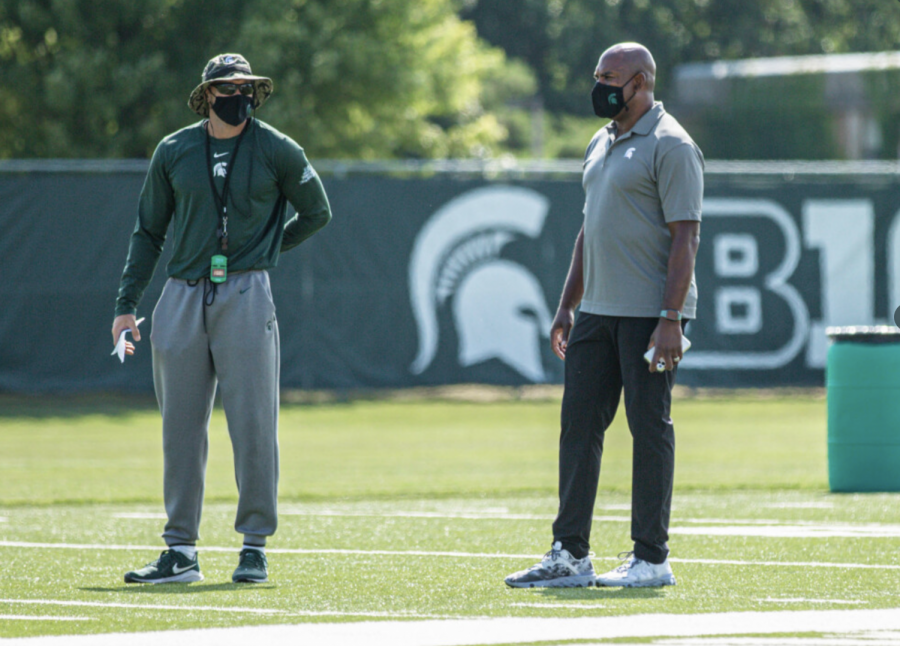 EAST LANSING — Michigan State coach Mel Tucker met with reporters early Wednesday afternoon to provide an update on MSU football as the team moves through the dog days of preseason camp before the season kicks off 17 days from now against Rutgers on Oct. 24. Here are some takeaways from his comments:
1. The quarterback battle is ongoing
Much like offensive coordinator and quarterback coach Jay Johnson, Tucker said MSU is “right in the middle of the evaluation process” with the quarterbacks right now. He also mentioned that each guy brings a different skill set to the table and that the room works well together. There’s been no indication from Tucker or Johnson about which guys are in the running for the starting job, but it can be assumed based on previous experience that it’s down to Rocky Lombardi, Theo Day and Payton Thorne for the job. Personally, I think Thorne is the best guy for the job, but my guess is that Lombardi will be the opening day starter.
2. Daily COVID-19 testing is going well
MSU players and coaches began getting daily antigen COVID-19 testing back on Sept. 30. Tucker said that the testing is “going well” and that the people from the testing company have basically become player support personnel for the program. Tucker said there is “a great mutual respect” between the testing people and the program, and so far, there have been no reports of MSU players needing to quarantine due to a positive test or exposure. Under the Big Ten’s return-to-play rules, players who test positive must quarantine for 21 days, so we’ve reached the time now where positive tests mean players will miss games.
3. Michigan State has already scrimmaged live once, and will again this weekend
Tucker said the Spartans had their first live scrimmage on Saturday in Spartan Stadium, and he was “very pleased” with how it went. No details were released about scoring or which unit “won,” as was usually the case when Mark Dantonio was in charge. Tucker and his staff have been very careful to speak vaguely about the events of anything to do with the X’s and O’s of the team, and the reason for that is twofold. First, Tucker mentioned that Saturday’s scrimmage was the first time the coaching staff had seen the team in a true live scrimmage setting and that they “learned a ton” about the team and its players. Second, Tucker does not want to tip his hand about the scheme he and his staff will be running and what the Spartans will be doing personnel-wise. Tucker said he hopes MSU can get back into Spartan Stadium for a second scrimmage this upcoming weekend.
4. The depth chart is not close to being completed
Tucker said that right now, Michigan State has “more of a rep chart than a depth chart,” which means that position evaluations are ongoing. Tucker is probably in no rush to release a depth chart too far ahead of the first game, as he’s played everything very close to the chest so far during this preseason camp. He also said that once the depth chart is released, nothing is set in stone and that position battles will be ongoing. The bottom line is this: outside of the program, no one can truly predict what the product of MSU football under Tucker will look like until they kick off their season in 17 days. We’ll just have to wait and see.

Eric Bach is the Sports Broadcast Director and football reporter at WDBM. Follow him on Twitter, @ebach21.