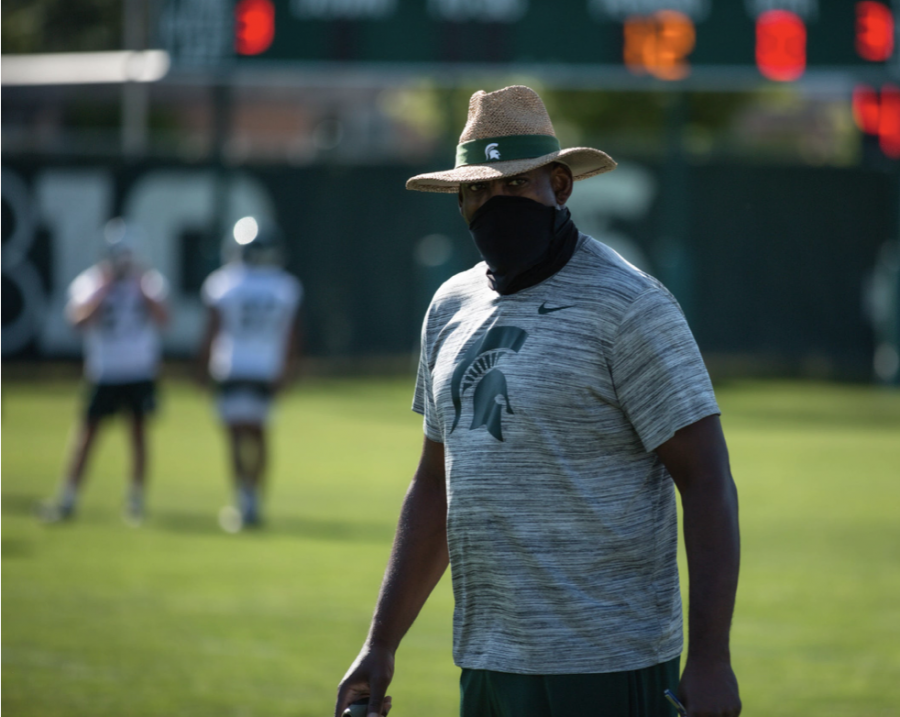 EAST LANSING — Michigan State head coach Mel Tucker met with reporters Thursday afternoon for his first public comments since the fall football season was reinstated by the Big Ten on Wednesday. He gave some insight into the logistics of the restart for MSU, along with some other interesting tidbits. Here are some takeaways:
1. MSU was always going to play
Tucker — much like his boss Bill Beekman yesterday — scoffed at the idea that Michigan State wasn’t going to play if the Big Ten went ahead with the season. He said that he and his coaching staff had “many different plans and timelines” in place for whenever the season restarted, including for late October.

That being said, he also indicated that he wasn’t aware of the Big Ten’s plan to restart until very recently. Tucker said he only found out “within the last week” that there was a plan in motion to try and still play a fall football season. That contradicts a lot of reports that said this has been in the works for weeks.
2. MSU will be helped by the delay on the field
Tucker was oozing with coach-speak about just taking things “one day at a time,” but realistically, the delay in the season will only help Michigan State from a competitive standpoint. Tucker said that he and his staff “learn something new every day” about the roster and the capabilities of individual players, and having five weeks to ease into the second attempt at fall camp will only provide the coaching staff with more information about what they truly have. Without having spring ball, every moment spent on the field actually coaching these guys counts.

The delay also could change the outlook of the roster from a strictly personnel perspective, as there could be some opt-outs, or players that opted out before the season got postponed could potentially opt back in. Two notable players that opted out before the season got postponed were Jacub Panasiuk and Jordan Reid, a starting defensive end and offensive tackle, respectively. Tucker didn’t have an exact timeline about when all of that will be settled, but he said it will happen “within the next week.”
3. Tucker has been very transparent with the parents of his players
Tucker mentioned that the coaching staff and medical staff had seven Zoom meetings with the parents of the players since mid-June, and that he thinks it’s important for the parents to be in the know about the policies and procedures that MSU is implementing to protect everyone. He also said that another parent Zoom meeting is scheduled for this Saturday, which will outline all the procedures for when the Big Ten starts testing everyone daily.
4. MSU will ease back into full contact
Tucker said multiple times that MSU is in better physical condition now than they were five weeks ago during fall camp before the season was postponed. It makes sense since the only things the players have been able to do the past five weeks is work out, and Tucker seemed to be pleased with the progress. He said the next few days will consist of walk-throughs and seven-on-seven work, with Monday being the first “normal football practice.” He anticipates Sept. 30 to be the first day of full pads, and then the last two weeks of camp before the first game to be “game-like practicing.”
5. Social justice and player mental health is at the forefront of Tucker’s mind
When asked about the impact of the recent social justice movements in sports and beyond, Tucker said there have been several team meetings where all players were open to express their viewpoints, and that the players “know where I stand as their leader.” He also mentioned that MSU has lots of resources available to players to help with mental health, and that there are action plans in place regarding social justice in the MSU community and beyond. “It’s not just empty words,” Tucker said. “I want our players to know they’re supported with resources and tangible things that are stronger than words.”

Eric Bach is the Sports Broadcast Director and football reporter for WDBM. Follow him on Twitter, @ebach21.