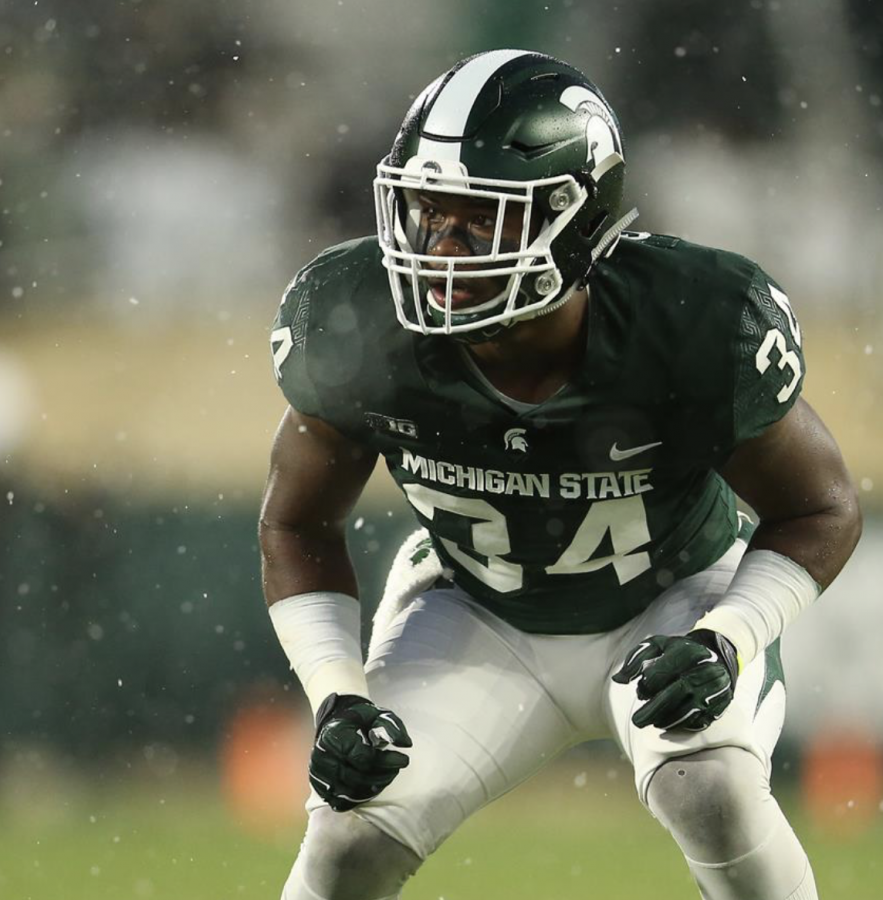 Despite the uncertainty surrounding the 2020 college football season, it is still the time of the year for award watch lists. Antjuan Simmons, Michigan State’s defensive leader at linebacker, was named to the Bednarik Award watch list, which is the award given to the best defensive player in the nation each year.

Simmons is entering his senior year at Michigan State as a leader on and off the field after emerging as a star in 2019. He started the season as Michigan State’s strong-side outside linebacker, before being moved into the middle linebacker role following the midseason suspension of Joe Bachie. After Bachie’s suspension, the defense looked for someone to become a leader, and Simmons stepped up. He led the team in total tackles (90) and was second in tackles for loss (15), which both ranked in the top 10 in the Big Ten overall.

Off the field, Simmons continued to be a leader for the Spartans. After the retirement of coach Mark Dantonio, Simmons was one of the athletes that addressed the media and talked about his commitment to Michigan State throughout his four years. He is going to be one of the leaders of the transition phase for Michigan State between Dantonio and new hire Mel Tucker, and his toughness and leadership will be valuable for a defense that will have a lot of new faces under a new coaching staff.

When Tucker was announced as MSU’s coach on Feb. 12, Simmons said, “That team meeting was intense. We’re ready, though. We’re going to play for you.” Simmons is in contention for a captain position on defense for Tucker and will fill in wherever necessary in the linebacker ranks.

After the departure of Kenny Willekes, Raequan Williams, Joe Bachie and Mike Panasuik to the NFL, the Spartans will have a lot of questions about their front seven going into the year. Simmons can be the voice of consistency among this group and lead it through inevitable growing pains in the upcoming season.

Michigan State traditionally ran a 4-3 defense in the Mark Dantonio era, which put a lot of emphasis on athletic outside linebackers that can cover wide receivers and tight ends as well as help out in stopping the run. Simmons thrived in that role, as he could play in space and use his quickness to his advantage. Tucker and new defensive coordinator Scottie Hazelton have a history of running a 3-4 or 4-2-5 as a base defense, but that should not be a problem for Simmons.

Simmons’ emergence as the middle linebacker last season was in large part because of his speed in attacking gaps downfield and ability to cover anyone. In either defense, that places more linebackers or defensive backs on the field, and Simmons should be comfortable operating in more space.

The reason why Simmons is expected to be one of the best defensive players in the nation this year is because of his athletic ability as well as his knowledge of the game. Simmons led the team in tackles last year because he was always in the right position, filling in the right gap in the front seven. Now, as he is surrounded with inexperience at each level in the defense, Simmons is expected to take another step as a player and a leader for Michigan State, and establish the defensive identity of Tucker’s Spartans this season.