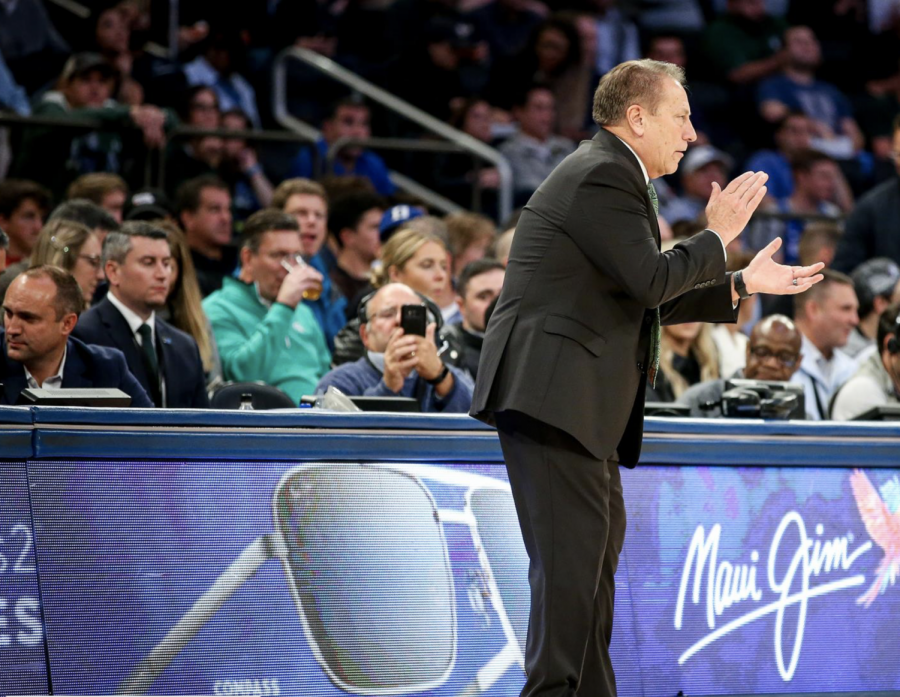 Well, this was unexpected.

In what was a pleasant surprise for Michigan State fans, 2022 five-star basketball phenom Emoni Bates verbally committed to play for Tom Izzo and the Spartans Monday afternoon on ESPN. Bates, a 6-foot-9, 16-year-old sophomore from Ypsilanti, Michigan, began his commitment by saying, “I’m not sure what the future may hold.” It has been postulated that Bates could finish his high school career, play one year outside of college, and declare for the NBA draft once he is eligible. As of right now, however, he is committed to the Spartans.

A key development to follow regarding Bates will involve the possible redaction of the current NBA guidelines, which state that a player must play at least one year in college before going pro.

Bates is the first sophomore in history to win the Gatorade National Boys Basketball Player of the Year award. According to Rivals.com, Bates is rated as the top high school basketball prospect since LeBron James. He is also only the seventh player to receive a perfect 1.000 rating by 247Sports since 2003.

Tom Izzo has landed star-studded recruits before like Miles Bridges and Jaren Jackson, Jr., but Bates is in a league of his own when it comes to high school prospects. He averaged 33.1 points, 9.1 rebounds, and 2.3 steals per game in his sophomore year with the Ypsilanti Lincoln Railsplitters. In terms of production, Bates is on a similar trajectory as LeBron James and Kevin Durant when they were high school prospects.

Brendan Quinn of The Athletic tweeted that Michigan State was unaware of Bates’ intention to commit until Monday morning. Last summer, Sports Illustrated released an issue with Bates on the cover, proclaiming that he was “next in line” to be the next NBA superstar, behind Michael Jordan and former Spartan Magic Johnson.

Michigan State fans’ best hope is that Bates finishes high school next year, graduates in 2021 and plays at least one year of college basketball under Tom Izzo. ESPN’s Jeff Borzello tweeted a quote from Bates about playing in the NBA G-League before making the jump to the big leagues: “It’s good for certain players. That’s a lot of money. I don’t really plan on, I don’t think I’ll do it. It’s good for some people, but I don’t think I’ll head that route.” This should be encouraging to Spartan fans that Bates won’t spurn East Lansing.

There’s no guarantee that Bates will ever set foot in the Breslin. A lot can happen in two years. However, dropping a verbal commitment out of the blue provides a sense of excitement–albeit a small one –for a fanbase that has been clamoring for any semblance of positive news over the past several months. Monday’s announcement confirms what was already expected: if he decides to play in college, he’ll play at Michigan State.

While positive sports news has been hard to come by as of late, perhaps what stung most of all for the MSU fanbase was the fact that Spartan’ fans weren’t able to see senior guard Cassius Winston get the chance to cap off his All-Big Ten career with a chance at a national title.

Winston, who holds the all-time assist record in the Big Ten, was on pace to finish as Michigan State’s third all-time leading scorer behind Shawn Respert and Steve Smith. Winston was averaging 18.6 points and 5.9 assists per game for the Spartans in what was undoubtedly his most difficult season at MSU. With all the personal turmoil that Winston faced over the season, a national championship would have created a storybook ending.

Before the season abruptly ended, the Spartans–who had defeated four consecutive ranked opponents to end the regular season–were arguably the hottest team in the country and a popular national title pick by several media outlets.

The sudden conclusion to his career was disheartening, but the addition of another potential Spartan legend in Bates helps to provide a bit of closure for the MSU faithful. With Winston leaving, many have been clamoring to find his heir. Because of Bates, MSU may have found the next Spartan elite.

With all the conflicting news regarding whether or not there will be sports in 2020, the commitment of Bates, even if it’s just a tentative one, is quite gratifying to MSU fans and serves as a much-needed morale boost. While nothing could come close to filling the void that so many Michiganders have felt during this tumultuous time, Bates’ announcement provided a brief respite and a glimmer of hope for a fanbase that hasn’t had a speck of positive news in quite some time.