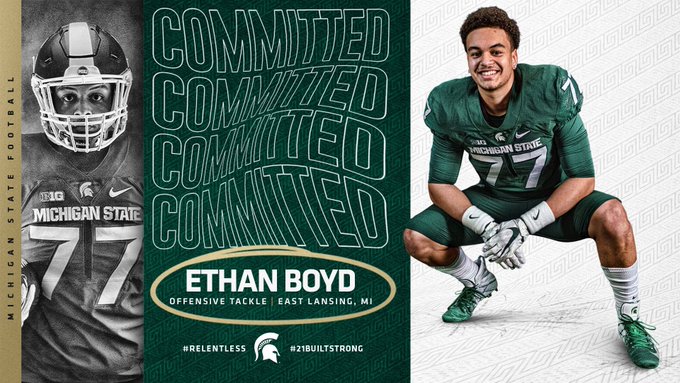 On Wednesday, MSU got the first verbal commitment from the class of 2021: three star running back Davion Primm, out of Oak Park (MI).

Boyd is headed into his senior year at East Lansing and has played both right and left tackle for the Trojans during his soon to be four-year varsity career.

“Tremendous potential,” said Feraco. “He’s only been playing for three years, we got him as a 9th grader … good feet, hand placement. He’s not afraid to work. He will definitely work on his craft the day he gets in.”

Feraco said that MSU is getting not just a tremendous talent, but a great teammate and student, too.

“I still don’t know if he realizes how good he can be.”

At 6-foot-7 and 290 pounds, Boyd will likely play tackle in college, where he has been his entire high school career.

“Any time a young person has the opportunity to go to the next level,” said Feraco. “Regardless of where it may happen, it’s pretty cool.”

Boyd’s commitment gave MSU two three-star prospects, according to 247Sports. The Spartans also missed on one of their bigger recruiting targets in the state as well on Thursday, as Detroit Martin Luther King safety Jaylen Reed chose Penn State over a short list of schools that included MSU.

The four-star safety was high on Tucker’s list as MSU looks to find more depth in the defensive backfield heading into the 2020 season.

Home is where the heart is..

No Turning Back, I’m All In Till It’s Over

Blessed to be in the position i’m in..

The Detroit MLK product is 6-foot, 190 and is a top ten prospect in the state according to 247Sports.