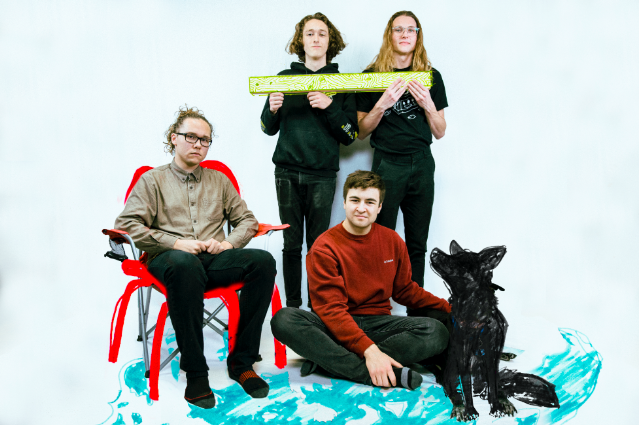 Melee, the highly anticipated debut album from Detroit-based band Dogleg, marks a key moment in the band’s career. It’s the precise moment where their sound seamlessly transitioned from hometown favorite to bonafide national obsession. Theirs is a joyous noise – a celebratory punk-rock exaltation of youth, juxtaposed brilliantly against a distinctive brand of pervasive, emo-laced melancholia. In short, the result is more than simply a promise fulfilled – it’s everything – and “Bueno” is a true highlight.

When listening to “Bueno”  you’re immediately hit with a wave of cascading emotions, all of which coalesce beautifully into an all-encompassing vibe that seems almost inescapable. What makes this listening experience so incredible is just how emotionally overwhelming it can be. You’ll want to mosh your way into the oblivion, cry like a child, pull your love close to you with reckless abandon and push the world away altogether – all within the span of a few seconds. It’s the feeling of pure, unbridled youth, and it’s something we’ll continue to cherish deep into the future.

There is a striking duality that cuts directly to the heart of Dogleg’s sound. On one hand, there’s the sheer pace at which they play. The rollicking, mosh-centric ferocity takes hold at the beginning of the album and never lets go. This energy leads to an endlessly satisfying listening experience that will keep you captivated from start to finish.

However, it’s the deep, pensive sadness that courses throughout their musical identity that truly makes Dogleg so special. While excitement is ever-present here, Melee is also the sound of everyday kids and young adults grappling with the reality that their youth is slowly passing them by. While such wistful, forlorn themes have long been a staple of the Midwest emo scene, with Dogleg the feeling is markedly more palpable. You can almost hear the band as they frantically reach out into the darkness for the last gasp of youth that lies within them, before ultimately raising their guitars and voices into the air in glorious, futile defiance of the coming of their own personal Ides of March. This feeling gives Dogleg an urgency and emotional sincerity that allows their material to fully take flight and makes for a listening experience that will stay with you well after the album’s final note has faded away.

Melee was released by Triple Crown Records on Friday, March 13. Be sure to check out Dogleg’s Impact session here, and our coverage of the band’s live-set here.

[Editor’s note: in Pitchfork’s album review, where Melee was given a “best new music” score of 8.6, one of Impact’s own articles was cited!]