In November last year, Chelsie and Danny saw Doppsee, the black rhino, get an ultrasound and they had an episode about it. 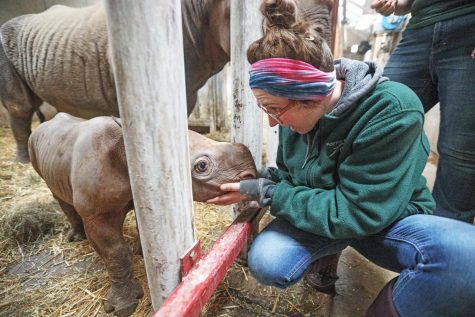 is the 13-year-old female eastern black rhino at Potter Park Zoo, who is originally from Sedgwick County Zoo in Kansas. The male rhino at Potter Park, Phineus, traveled to Lansing from Caldwell Zoo in Texas in 2017. Doppsee gave birth to Jaali, on December 24th, 2019. In this episode, they follow up with Dr. Ronan Eustace, and Pat Fountain again to see how Doppsee is doing after giving birth to Jaali. They were also joined this time by Adrianna Davidson, Murphy Swartz (shown in picture), and Kim Hernandez.

Adrianna and Murphy are hoofstock keepers and Kim is the area lead hoofstock keeper. They take care of the rhinos and they discuss what it is like to tend to a baby rhino.

Dr. Ronan Eustace has a Doctorate of Veterinary Medicine from the University of Saskatchewan, Western CVM. After three and a half years at Potawatomi Zoo, Dr. Ronan Eustace came to Potter Park Zoo. Before coming to Potter Park Zoo, Dr. Ronan worked at practices ranging from sizeable multi-doctor specialty practices to small rural mixed clinics for four years before he became a zoo veterinarian. 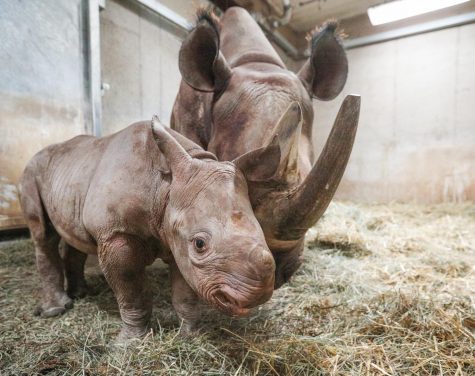 Pat Fountain is the Animal Care Supervisor at Potter Park Zoo. He received his B.S. in Zoology in 2006 from Michigan State University. Pat has cared for Doppsee since she arrived in 2011 and he was there for Jaali’s birth.

If you’re interested in talking about your MSU research on the radio or nominating a student, please email Chelsie and Danny at [email protected] You can ask questions for our future episodes here. Check The Sci-Files out on Twitter, Facebook, Instagram, and YouTube! You can find the transcript for this episode here.