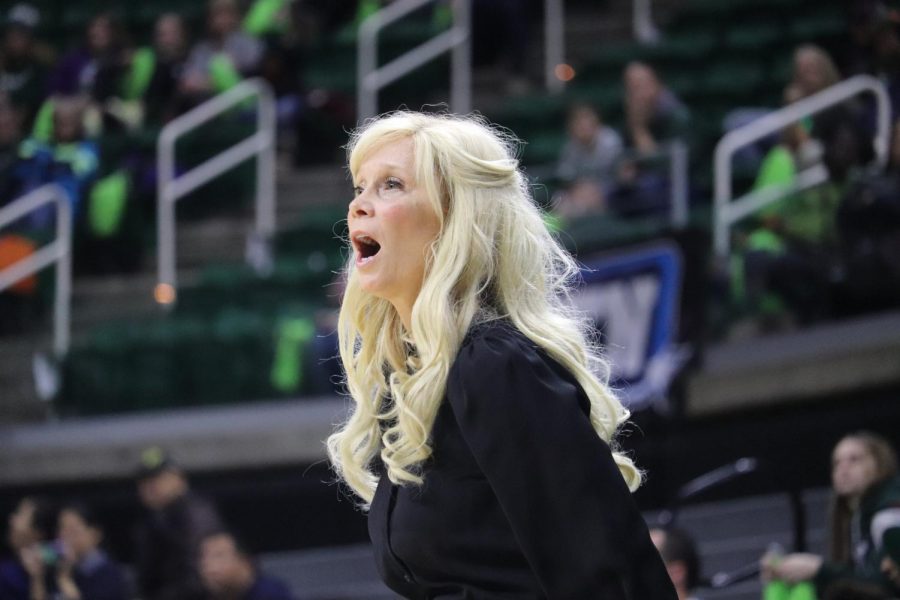 EAST LANSING — This one hurts. After losing by twenty to Michigan back on Jan. 5, Michigan State roared back from a 15-point halftime deficit to take a 49-48 lead at the 7:58 mark in the fourth quarter, Michigan stemmed the tide and finished the game on a 17-8 run to rip the hearts out of the Spartans for the second time this season.

“We are 23-6 against them, so I can’t remember how many times I have lost to them twice in a season,” said MSU coach Suzy Merchant. “That was probably what shocked me about our first half performance because we already lost to Michigan once.”

Today’s game featured runs, offensive struggles and momentum on both sides. Unfortunately for the Green and White, today’s game yet again reminded the upperclassmen how far the Spartans are from being where they want to be.

“It’s just a different type of hurt,” said Taryn McCutcheon. “I haven’t played in a game where I have lost to Michigan until this year and we lost it. I think we are young and we don’t understand that it isn’t just another game. That one hurts deeper than people will understand yet.”

For the first time since the 2014-2015 season, Michigan has swept the season series against MSU. Perhaps no game serves as a better microcosm of the entire season than the hotly contested battle that was waged on the court of the Breslin Center today.

“We all look forward to the rivalry, whether it is at Crisler or it’s here,” said Naz Hillmon. “It’s just a great opportunity for everybody to look and advertise women’s basketball and see how competitive it can be.”

The Michigan State season in general has three consistent elements throughout each game: toughness on the defensive end of the floor, rampant offensive struggles and being so close but so far away. All three of these tenants were on display for MSU against Michigan.

MSU only shot 31% from the floor in the game. At this point in the season, it is fair to surmise that this Spartan team won’t win games on its sharp shooting ability. Rather the ability to play suffocating defense and doing just enough on the offensive end has been the recipe for each of the Green and White’s seven conference wins.

When the Spartan defense can take a team’s best opposing player out of the equation, chances are usually good for the Spartans. Look no further than the Spartans’ victory against Rutgers on Feb. 13. Arella Guirantes, who popped off for 28 points the first time these two teams met, was hounded by Moira Joiner all game and only went 5-of-15 from the floor. Despite only shooting 36%, the Spartan defense did enough to ensure the win.

The Spartans usually run into trouble when they are unable to slow down the opposing team’s best player. From Lindsey Pulliam to Karissa McClaughlin, the Spartans have often let one player destroy them. This ugly trend reared its ugly head yet again as Michigan’s Michigan’s Naz Hillmon torched the Spartans for 26 points and 13 rebounds.

Once again, MSU couldn’t buy a bucket throughout the majority of the game. After compiling a strong shooting performance against Purdue (47% from the floor), the Green and White regressed to another poor shooting performance, as the Spartans shot 31% from the floor on the game. Even in the seven conference wins that the Spartans have mustered, offensive woes have become an all too common theme. This, combined with subpar rebounding efforts, have emerged as common elements in contests where the Spartans fall short.

“They outrebounded us by 20, which is terrible and very disappointing,” said Merchant.  “Michigan did a really good job of attacking the boards and we were soft offensively trying to get rebounds.”

The final element of the Spartan season identity is being so close but yet so far. MSU has for the most part done a good job of keeping games relatively close throughout the season, but it has been a massive struggle to finish in crunch time.

From LSU to Florida State to West Virginia, MSU has had every opportunity to collect quality wins. With the exception of the Spartans’ victory at home against Ohio State and Rutgers, as well as the road victories against Rutgers and Purdue, the Green and White have simply not done enough down the stretch to collect several key wins.

The Spartans were leading Iowa going into the fourth quarter and were only down by four at Michigan going into the final frame. The result of both of these games? Double digit losses caused by the opposing team making big time plays in the final minutes of the contest.

Credit must be given to Michigan and coach Kim Barnes-Arico for not once but twice finding a way to gut out two huge wins over MSU. Despite late Spartan runs, the Wolverines were the team who stayed even-keeled through it all.

“We came out and played exceptional in the second quarter,” said Barnes Arico. “Michigan State then came back and that’s what they do, especially here. That is traditionally what they have done against us. We had to figure out a way to bounce back after they took that lead and finish the game. I am really proud of the way our kids were able to do that, especially with two starters fouling out.”

MSU will now enter into the final regular season week of action before the Big Ten Tournament. On paper, the Spartans should have no problem against conference basement dwellers Illinois and Penn State. Combined, these two teams have a 3-29 record in conference. What is on paper and what actually plays out in person, however, are two vastly different things.

With wins over Illinois and Penn State, MSU would most likely be in strong shape to make the WNIT. Injuries, a .500 record in arguably the toughest conference in basketball and a high strength of schedule should ensure that there is postseason basketball in East Lansing. However, if MSU plays against either of these teams like it did against Michigan in the first half, then MSU could be left with nothing in a few short weeks.