Hillmon, Wolverines too much to handle as Spartans fall at home 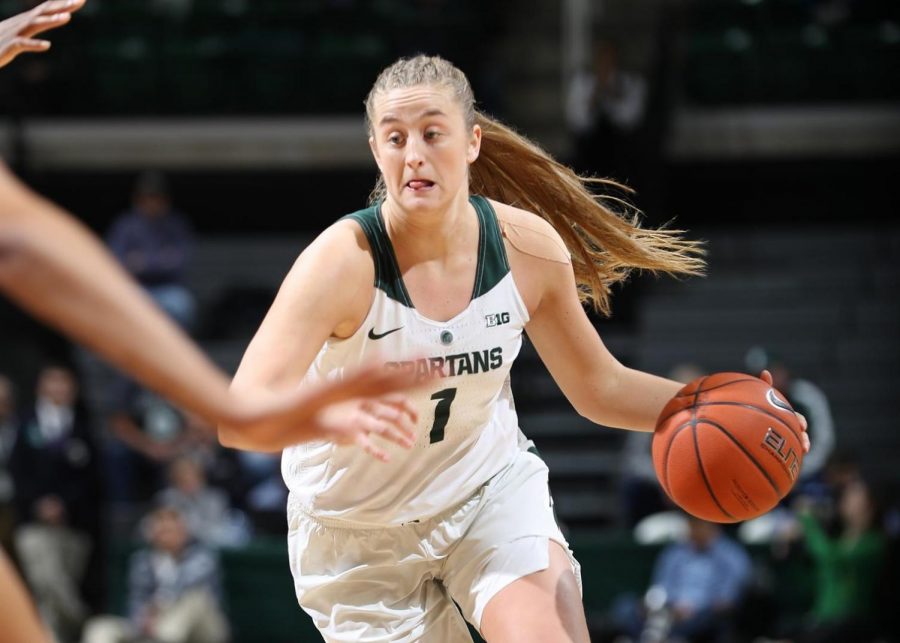 “This game sucks but we will learn, it’s a different kind of loss” said Tory Ozment.

An interesting note for coach Suzy Merchant’s young squad was Shay Colley’s return. The redshirt senior from Ontario, Canada was ruled out for the season with a knee injury by Merchant, but she made her return just in time for this Big Ten rivalry game. Colley first entered the game with 53.3 seconds to play in the first quarter.

“No I am not surprised she played today,” said senior point guard Taryn McCutcheon of Colley. “I needed her out there and I didn’t care how well she played.”

As soon as the game started, the Spartans were all over Michigan’s Naz Hillmon. Kayla Belles was strong in the post forcing hard shots and traveling violations on the sophomore starter who averages just under 17 points and 8.5 rebounds a game. The defense was strong in the start of the first and even forced two turnovers in the first two minutes. Both teams hadn’t scored until the seven-minute mark with a Hillmon free throw.

“We came out with an intensity on the defensive end” said Hillmon. “It fuels us for our offensive scorers and we ran a lot of set plays to mix it up on them.”

Coming off the bench, Taiyier Parks and Nia Hollie did not provide much for the Spartans with both either committing lazy fouls or not making crisp passes. Ozment stepped up in place of the post players by forcing turnovers and hitting big time shots.

“I just really hate losing, I feel like people scout me as a shooter so I am trying to drive to the basket more,” said Ozment.

“I think last time we played them we ran out of gas and we did that again,” Ozment continued. “We need to play a full 40 minutes and it starts with going hard in practice.”

MSU’s Cyndi Dodd came into the game scoring off a nice pass from Nia Clouden but did not convert on the foul shot after.

The biggest problems for the Spartan were fouling and containing Hillmon, who was a monster that Michigan State just could not handle. With 17 points and eight rebounds only at halftime, the Spartans needed to find a solution.

Michigan coach Kim Barnes Arico talked about her star player after the game.

“The way that she gets up and down the floor for a post player is incredible,” Barnes Arico said. “It’s a tough matchup for anyone and we took advantage of that.”

To close the half, the Wolverines made five of their last seven shots coming from Hillmon and Akienreh Johnson which provided a boost. The score at the break was 25-40.

To start the third quarter, Ozment hit a three and McCutcheon also connected on a mid-range jumper. With 7:36 left in the third, the Spartans cut the deficit to nine.

Michigan started to get into foul trouble with almost six minutes left to go in the third. Haley Brown picked up her fourth foul and Johnson picked up her third. McCutcheon took advantage and had a terrific and-one. With five and half minutes left, the Spartans found themselves in the bonus, which forced Kim Barnes Arico to call timeout and not let the Spartans gain momentum.

“Michigan State came back and that’s what they do,” Barnes Arico said. “We had to find a way to bounce back after two starters fouling out of the game.”

With a minute left and some change in the quarter, Colley got her first bucket since returning from her absence.

The Spartans fought back from a 25-40 deficit with an intentional foul by Isabelle Varejao and an offensive foul by starting point guard Amy Dilk. The score heading into the fourth quarter was 43-47 in favor of the Wolverines, who had not made a field goal for almost five minutes.

With 7:65 in the fourth quarter, the Spartans took back the lead with a Clouden drive on the left side of the court.

In this big in-state rivalry game, the referees were not afraid to blow their whistles. Hillmon and Dilk were sent to the charity stripe and each went 4-for-4.

At the four-minute media timeout, the biggest topic for the Spartans was attacking Michigan players and drawing fouls on players like Brown, Johnson and Dilk all who committed four fouls. With four minutes left in the game, the Spartans were only down four.

This game came down to fouling and free throws. Some calls at times stirred Merchant out of her seat with two near steals by McCutcheon, sending Dilk to the line. With 1:14 left in the game, the Spartans found themselves in a nine-point hole. At the time, Brown and Johnson had fouled out which put Sidor and Varejao on the floor.

“I was surprised how much the refs let the game go, like on-ball defense because in the women’s game that seems to be a quick foul,” said Merchant.

“Our team is very young and inexperienced in many ways.” “Michigan did a really good job attacking the boards and I feel we played soft,” Merchant continued.

When looking back at this game, some calls just didn’t go Michigan State’s way in the last couple of minutes. Many fouls caused Michigan to score just off of free throws. Michigan State in the fourth quarter had shot 19 free throws while turning those into 14 points.

The Wolverines have swept the Spartans, taking both season games at the Crisler Center and in the Breslin Center. This is the first time since the 2014-15 season.

The final score of the game was 57-65. Hillmon ended the game with 26 and Dilk gave 15 points. For the Spartans, Clouden gave Michigan State 18 points with McCutcheon not far behind with 14. The next game for the Spartans will be at Illinois on Wednesday.

Charlotte Steinberg is a women’s basketball beat reporter for Impact 89FM WDBM. Follow her on Twitter at @sportstalksbycs.