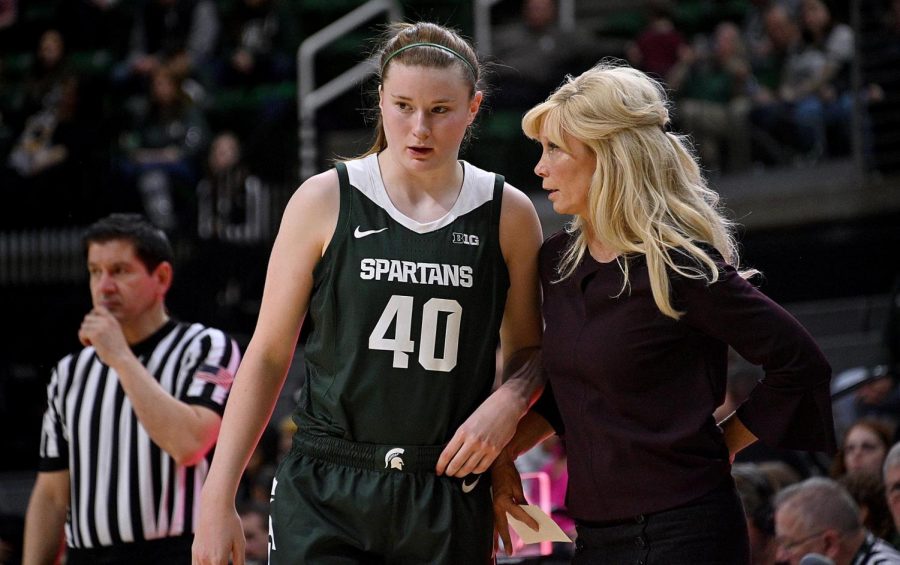 EAST LANSING — Someone should have told the Minnesota Golden Gophers that leaving Julia Ayrault open on the perimeter was a recipe for disaster. The Grosse Pointe native single handedly buried the Gophers in the fourth by notching all of her 10 points within the final frame. When the Spartan offense went ice cold, it was Ayrault who delivered in crunch time to seal a much needed 66-54 win over the Gophers.

“I went into this year watching her and I’m like ‘this kid is going to be our starting four-man’” said coach Suzy Merchant. “Then she had all these ailments and issues, even though some of it involves roughening up a little bit.”

The last several games have been rough for Ayrault. She scored only nine points during the Spartans’ prolonged five-game losing streak. This stretch featured good players making selfish plays at the worst possible times. Young players who had not been accustomed to receiving significant minutes were suddenly thrust into the limelights in some of  college basketball’s most hostile arenas, such as the Xfinity Center and Carver-Hawkeye Arena.

Ayrault’s freshman year has not been without significant setbacks. Injuries, illnesses and a discombobulated rotation have all contributed to a less than ideal initial campaign for the Spartan forward. One particular spell with the flu kept Ayrault out of the rotation against Maryland on Feb. 3. Ayrault was also held out against Ohio State on Jan. 16 because of lingering flu-like symptoms. Safe to say, Ayrault has dealt with a lot in her first season of Division I college basketball.

“I had it for about a week and a half and I was feeling good and everything, and then we landed in Maryland and I was having the same symptoms,” said Ayrault. “We don’t know if it was that or not, but it just hit me again for some reason, so that’s why I was out for that game.”

Despite the constant bombardment of injuries that has threatened to thwart Ayrault’s 2019-20 campaign, the four-star recruit has stayed the course and contributed game after game in more ways than one. Even when the shots haven’t been falling, Ayrault’s ability to play strong defense, run well in transition and be a menace on the boards has forced Merchant to play her in crucial minutes.

“The kid’s IQ is off the charts,” said Merchant. “I think she is going to be an amazing four-man for us and I think that she has a chance to be an all-conference player. She just needs to figure out the bumps and bruises and some of the challenges that happen in this game.”

Ayrault does not feature an ankle-breaking crossover like freshman teammate Alyza Winston, or a massive physical presence like Cydni Dodd. But what she lacks in physical skill, she makes up for with her knowledge of the game. Time and time again, Ayrault has impressed with her lateral quickness, which allows her the opportunity to guard multiple positions. Her ability to play within herself and contribute at all levels of the contest will serve her well going forward.

There may be no player on the current roster that MSU features that has a higher ceiling than Ayrault. Despite all the things that she does well, there are certain things that hamper her from truly becoming an all-around dominant player.

“This offseason will be huge for her,” said Merchant. “She needs to spend her life in the weight room. She needs to get stronger and get her agility where it needs to be and I think the sky’s the limit for her, because she has such a great IQ for the game.”

After the Minnesota victory, the prospects of a possible WNIT berth improved significantly for the Green and White. As of Feb. 11, Charlie Creme of ESPN has eight Big Ten teams qualifying for the NCAA tournament. If this prediction were to hold true and the season ended tomorrow, MSU would automatically qualify for the WNIT as a result of being ninth in the conference standings.

“A couple of times we said to each other that ‘our season is not over,’” said Ayrault. “We still have a lot of games left and we still have a lot of opportunities to grow and get better, so I think that has been kind of our main focus. If we play our hardest and we are learning and growing from our experiences even if we do lose, then it is great.”

Ayrault’s health has taken a significant leap forward over the past couple of weeks. She will be counted on going forward to contribute in a meaningful way against Purdue on Thursday and Michigan on Sunday.

“Keeping our energy up and cheering for the little things and getting excited for each other will be super important for us,” said Ayrault.

Only time will tell where the 2019-20 season comes home to roost for the Spartans. The regular season which has been marred with setbacks and difficulties is only four games away from the concluding. The Green and White only have two more home games before the Big Ten Tournament commences in Indianapolis. It would be impossible to predict where the Spartans will end up in the regular season standings. But one thing is for sure: leaving Julia Ayrault alone at the top of the key is never a good idea.