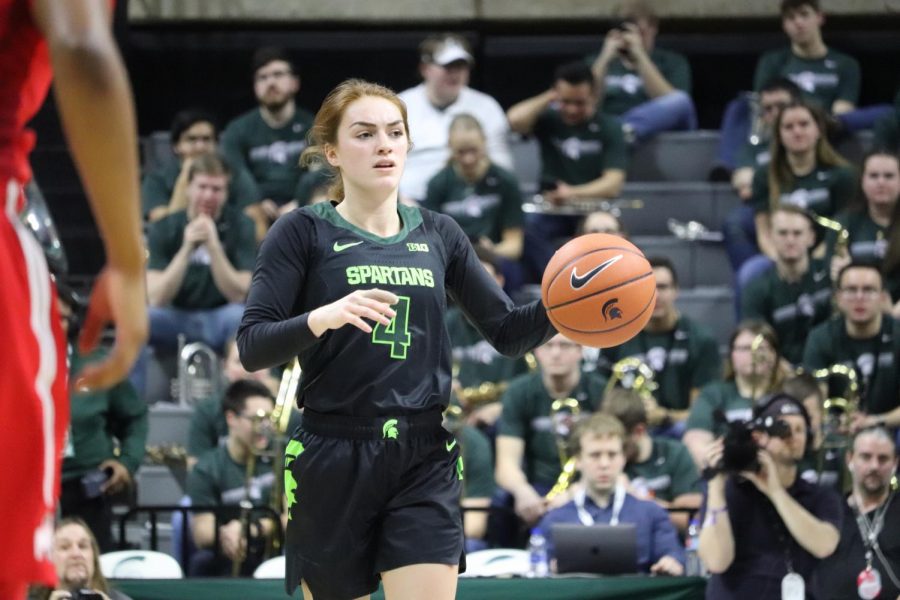 EAST LANSING — The Rutgers Scarlet Knights and the Michigan State Spartans played in East Lansing on Thursday. Rutgers came into the game with a record of 17-6 (7-5 Big Ten), while Michigan State carried a record of 11-12 (4-8 Big Ten). The Spartans started the game with a change in the starting lineup, with coach Suzy Merchant deciding to start Tory Ozment instead of Nia Hollie.

Michigan State started the game with a Taryn McCutcheon 3-pointer, but then Rutgers went on a 10-0 run over a two and a half minute span. Rutgers ended the first quarter with a 21-13 lead, shooting 10-of-16 in the quarter. Jordan Wallace tore up the Spartans down low with 11 points (5-for-6 FG) while grabbing three rebounds.

In the second quarter of action, the game was pretty even. Both teams struggled from the field in the quarter, with Michigan State shooting 5-of-15 from the field and Rutgers shooting 5-of-14. Rutgers did not score for the final 3:19 of the first half and Michigan State made only one of their final seven shots. Rutgers led at half by a score of 31-24.

The third quarter was a hard fought one by both teams, with multiple loose balls being dove after, much like you would expect from a Big Ten basketball game. With 2:54 left in the quarter, Ozment got an and-one layup which sparked a 9-0 run from the Spartans to bring the score to 42-39 with 56.3 second left in the third quarter. That is how the score would stay until the start of the fourth.

The fourth quarter started exactly as the Spartans hoped it would, with them coming out of the gates scoring four straight to take a 43-42 lead. Khadaizha Sanders then scored five straight for the Scarlet Knights, making the score 47-43. In the following minutes, the Spartans went on a 10-0 scoring run, which brought the Breslin crowd to its feet. With 36.1 seconds left, the score was 53-51 in favor of the Spartans. After a defensive stand by the Spartans, McCutcheon hit two free throws with 4.2 seconds left. Then, after a quick Rutgers bucket, McCutcheon was fouled again, only for the same result. The Spartans took care of business at home by a score of 57-53.

Following the victory, Merchant talked about how her team needed this win.

“It just felt good, it just felt like it’s been a while,” said Merchant.“We had a tough stretch where we played those five games, and we were on that losing streak, and four of those five teams were the top of the league, and three of those games were on the road. A win after a slump is always nice”

The Spartans play their next game Monday, Feb. 17, at 7 p.m. in East Lansing as they welcome the Minnesota Golden Gophers.