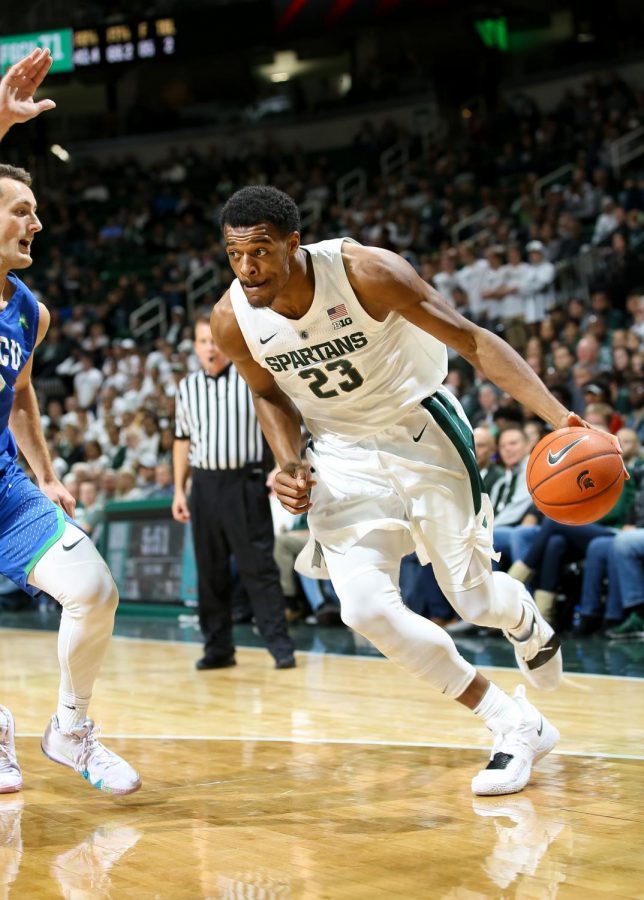 MADISON, Wis. — The Michigan State Spartans fell to the Wisconsin Badgers by a score of 64-63 on Saturday, but the score isn’t quite indicative of how the game went at all. The Spartans came out flat once again on the road, and it proved to be their fatal flaw.

Sloppy, sluggish and careless starts to games have been the ultimate Achilles’ heel for the Spartans this season. Being on the road has magnified the problem, and Big Ten opponents are really seizing the advantage. Just look at the Spartans’ road losses to Purdue and Indiana.

In the first half, the Badgers shot 58% from the floor to the Spartans’ 33% and knocked down 46% of their threes to the Spartans’ 31%. The result? A 16-point halftime lead for the home Badgers. Nate Ruevers led the way in the first half with 13 points (2-for-2 from deep). The trio of Brevin Pritzl, D’Mitrik Trice and Aleem Ford also combined for 22 first-half points.

“We lost the game in the first half because we guarded nobody,” Michigan State coach Tom Izzo said bluntly. “So then you give a team energy, the fan base energy, and for you it’s depressing. And that’s where the game is lost.”

As for the visitors, it was really just Cassius Winston’s typical flow (eight first-half points, 4-for-7 field goals) and Rocket Watts’ rhythm from 3-point land (nine first-half points, 3-for-6 from deep) that kept the Spartans at a somewhat respectable striking distance at halftime.

To elaborate, Xavier Tillman, Kyle Ahrens, Marcus Bingham Jr., Gabe Brown and Julius Marble shot a combined 0-for-10 from the field in the first half.

The second half was a much different story, as the Spartans came out with conviction, cutting the lead to just three points halfway through the period. Winston was the driving force per usual, as he would finish with a game-high 23 points. However, a plethora of empty Michigan State possessions followed, and the Badgers built the lead back up to double digits with 8:13 remaining in the game.

Another late run gave the Spartans some hope, as they trailed by less than five points for much of the final few minutes. But the Badgers continued to rally thanks to Ford’s 3-point stroke and some late Trice free throws that would essentially seal the upset victory. A Winston 3-pointer in the final second made it just a one-point loss for Michigan State.

Much like the road game vs. Indiana, in which the Spartans actually took a lead late in the game, the large early deficit just proved too much to handle, especially on the road in the best conference in college basketball. Recent history seemed to repeat itself in Madison.

A huge hole that the Spartans struggled to compensate for was the poor performance of Tillman, who has been one of the Spartans’ most steadfast players all season, averaging 13.8 points and 9.9 rebounds per game coming into Saturday’s contest. His 3-for-15 field goals weren’t enough for the Spartans to pull out a win on the road.

However, Izzo was quick to come to Tillman’s defense, even referring to him as “Batman.”

“Could we have snuck it out if he makes some layups, or makes a layup in Indiana? Maybe,” Izzo said before asking rhetorically, “but did we deserve to win it?”

The Spartans, now 16-6 (8-3 Big Ten) will head home searching for a bounce-back win vs. the Penn State Nittany Lions on Tuesday in East Lansing. Tipoff is set for 8 p.m. on Big Ten Network.