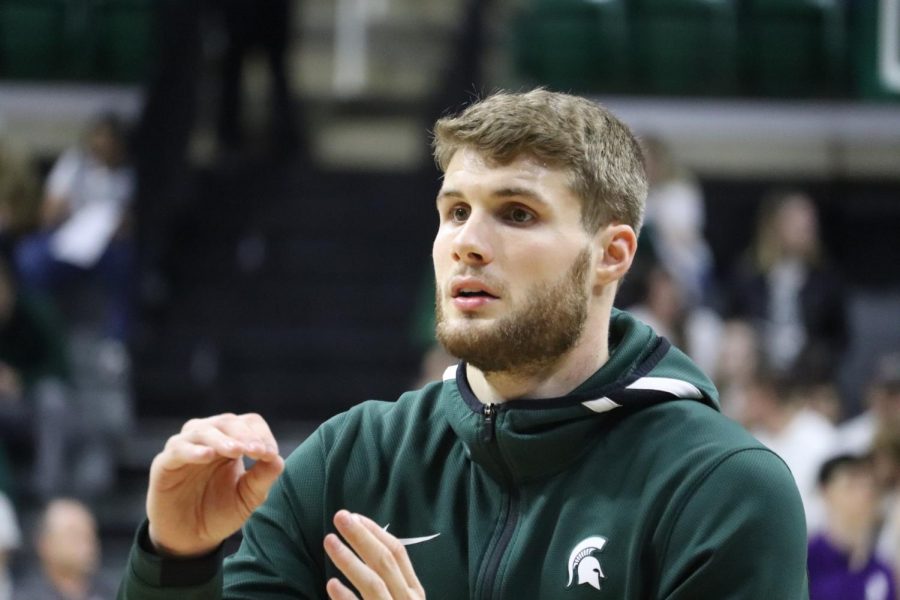 EAST LANSING – The Michigan State Spartans are hot off two wins against Minnesota and Northwestern, and headed for Wisconsin to take on the Badgers Saturday.

No. 14 Michigan State is now 16-5 and 8-2 in the Big Ten. After two rough road losses to Indiana and Purdue, the Spartans will have to find a way to play execute on the road.

Wisconsin is 12-9 overall this season. The Badgers, as well as the entire Big Ten it seems, are playing tough, overcoming teams like No. 12 Maryland, No. 17 Ohio State and No. 22 Marquette.

Despite the news of guard Brad Davison’s suspension for the matchup Saturday, Wisconsin will be a hurdle for the Spartans. Davison is averaging 30 minutes per game, 8.8 points per game and 4.6 rebounds.
Nate Reuvers
All eyes are on Nate Reuvers, the Badgers leading scorer, to make up for the lost buckets. The 6-foot-11 forward averages 13.8 points per game (14th in the Big Ten) and five rebounds. Reuvers scored 19 points against the Spartans back in January.

The Spartans number five spot in Xavier Tillman will need to battle all game to slow down Reuvers offense. Tillman’s been averaging 9.9 rebounds and 13.8 points, the matchup looks pretty even, but Spartan forwards have had trouble with big guys in the paint before.
Home court
Hot off a loss to Iowa on the road, the Badgers will be back home where they have a two-game winning streak. While every team in the conference seems to be struggling on the road, Wisconsin will have the home court advantage. All five of MSU’s losses were on the road, and the Badgers are 8-6 at home against ranked opponents.

Wisconsin leads the all-time series in Madison, 46-26. The Spartans haven’t lost to the Badgers in Wisconsin since 2016.

Michigan State will need to replicate the same energy seen in the Northwestern game if the program wants to see the same results from Wednesday.
Matchup
These teams are a solid matchup in regards to offensive threats. The Spartans’ ball movement trademark is reciprocated by the Badgers. Wisconsin has six players averaging between seven and 14 points per game. Michigan State’s depth will be tested.

Last time out, Spartan guards Gabe Brown, Rocket Watts and Aaron Henry put up a combined 36 points to help finish the game. The Badgers have an arsenal of D’Mitrik TRice, Aleem Ford, Micah Potter and of course Reuvers. These offensive threats give Wisconsin a response when it comes to scoring ability.

Although the road games have been inconsistent for the Spartans, they are on an eight-game winning streak against the Badgers. It will be a solid game to watch in Madison. Tip-off is scheduled for 1 p.m.