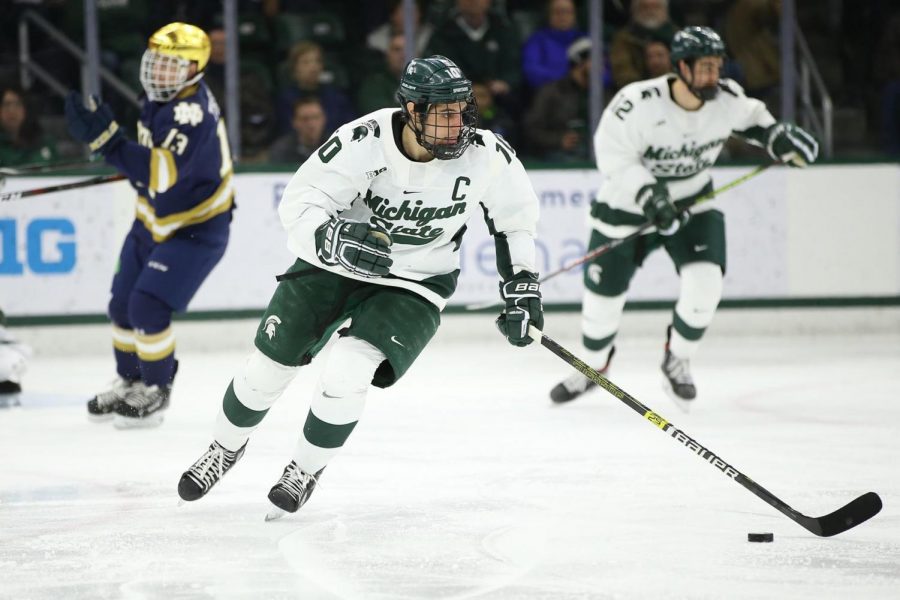 EAST LANSING — The Michigan State Hockey squad will head into a bye week in a great position. The Spartans are currently tied with Penn State for first place in the Big Ten as they head into the last real break of the season.

The Spartans are coming off a weekend with No. 9 Penn State where they won the first game and lost the second in overtime to keep their place at the top of the standings. Now they head into a bye week before the final stretch of the regular season—which comes at a great time.

Some players would prefer to keep playing after the bad taste the overtime loss on Saturday left, like captain Sam Saliba.

“If we got the win in overtime, I’d probably say it’s a good time for a week off,” said Saliba. “But after that you kind of want to keep going, but the schedule is what it is, so we’ll take it to our advantage.”

But the rest will be good, as this team has played a tough stretch of games and is now in a spot where every game is crucial. Michigan State currently sits at No. 18 in the PairWise rankings, and teams need to be at least No. 16 to qualify for the NCAA Tournament.

This is also a good time for healing. Michigan State has been extremely gifted to have not suffered a major injury yet this season. However, hockey is a physical game and the season takes a toll on everyone.

“We’re going to recover,” said captain Tommy Apap. “A lot of guys are banged up a little bit, so we’ll heal up those midseason bumps and bruises and we’ll be ready to go.”

One particular player who needs rest is goalie John Lethemon. Not only is he carrying the load for this team, he took a scary hit on Saturday late in the game which made him slow to get up. If anything were to happen to him, Michigan State would be a much less scary hockey team. Getting Lethemon rested before the next series in Minneapolis next weekend will be critical.