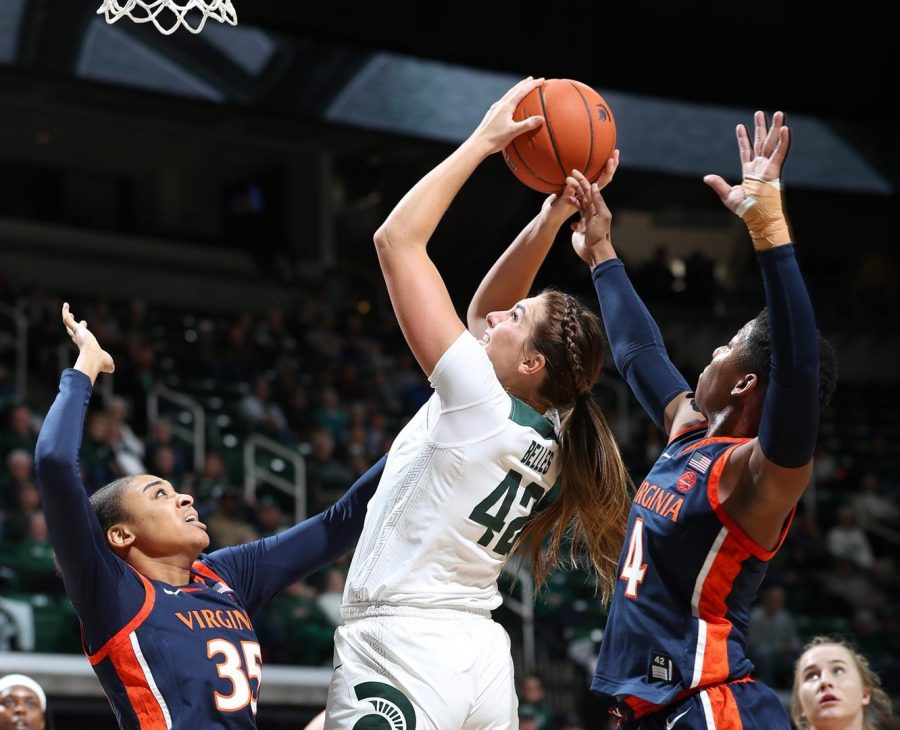 The Michigan State Spartans traveled to Piscataway on Monday to pick up a win vs. conference rival Rutgers. Beat reporter Nathan Stearns has some takeaways from the win:
Moira Joiner was a difference maker
Michigan State has been plagued with the lack of a consistent third scoring option throughout the course of the season. In Monday night’s massive road victory vs Rutgers, the Saginaw, Michigan native put the rest of the Big Ten on notice with a 20-point explosion that included  a sterling 5-for-6 mark from beyond the arc. Joiner was the principal reason that the Spartans were able to register the 66-55 win over the Scarlet Knights. The sky’s the limit for the Green and White if Joiner can emerge as a consistent scoring threat night in and night out.
The Spartans out-hustled Rutgers
After blowing quality victory opportunities late against solid squads such as LSU, Florida State and Michigan, the Spartans have responded with gritty wins against the likes of Ohio State, Wisconsin and Rutgers. In this contest, the Spartans outrebounded the Scarlet Knights by a 47-26 margin. Kayla Belles continued her strong recent run of play with 13 boards to go along with seven points. The Spartans did a phenomenal job in taking a staple of the Scarlet Knight offense and using it against them. Rebounding will be a key component going forward for the Spartans, as they welcome No. 22 Northwestern to the Breslin Center on Thursday.
This win greatly improved MSU’s tournament hopes
After undergoing a rough stretch of play in late December/early January, the Spartans have resurrected their NCAA tournament hopes with three consecutive wins against solid clubs. Today’s road win against Rutgers will loom especially large on Selection Sunday for the Green and White, as Rutgers came into this contest with a 15-2 record. After struggling mightily on the road for the majority of the season, the Green and White’s win today was by far their best overall victory of the season.
The Impact of Julia Ayrault cannot be overstated
Despite defeating OSU 68-65 on Thursday, the impact of not having Julia Ayrault was quite visible for MSU. Fortunately for the Spartans, Ayrault was back after a brief one game absence and provided seven points and four rebounds in 15 minutes of action. Her high basketball IQ combined with her positional versatility is a welcome addition for a Spartan team that has been hampered with injuries and illness as of late. She will need to continue to play well off the bench going forward for MSU, as conference powerhouses such as Iowa, Maryland and Northwestern loom.
MSU is on a roll right now
The Spartans are currently in the midst of a three-game winning streak that has seen them withstand extended runs by Ohio State and Rutgers and come out on top. This is a welcome sight from earlier in the season, where MSU would often collapse late in games. Spartan confidence will be quite high when Northwestern comes to town this Thursday. The Spartans’ recent stretch of play has put them back in the discussion for an at-large berth. If the Green and White are able to hold serve at home against Northwestern and then go on the road over the weekend and knock off No. 19 Iowa, there will be absolutely no doubt as to whether MSU is a worthy tournament team or not.