Winston breaks records, No. 15 Spartans back on track with 67-55 win over Badgers 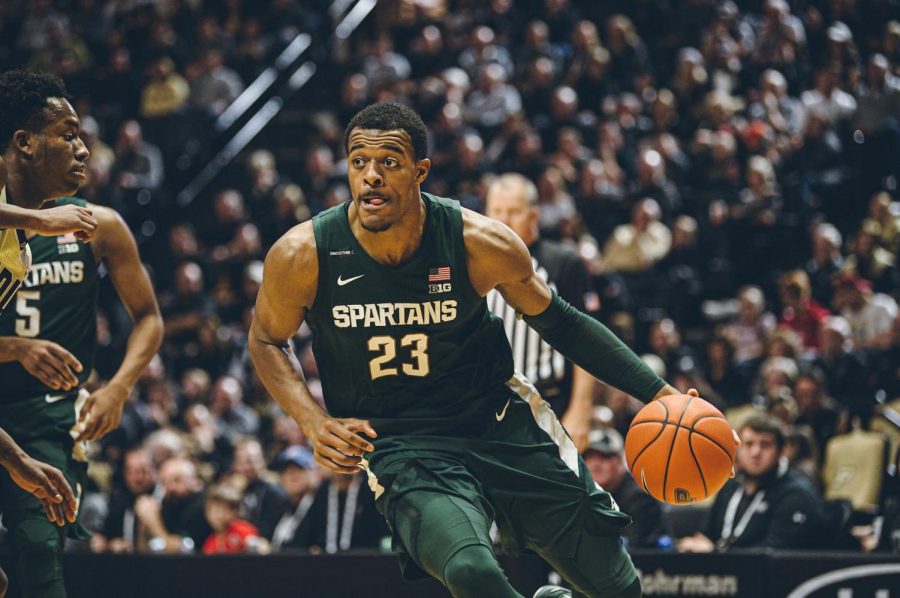 Michigan State’s loss against Purdue was one that the team, coach Tom Izzo and fans will always remember. Mackey Arena will probably haunt them. Especially for Izzo, who claimed it was “probably the worst beating I’ve taken as a coach.” Izzo and his Spartans weren’t going to let that define their season. With a strong start, they came back with a vengeance Friday night, beating Wisconsin 67-55.

There were two big parts of this game — one, the Spartans never let go of the lead, proving their power. Two, Cassius Winston broke the MSU all-time assist record of 816, which was held by Mateen Cleaves. Not only did he break his school’s record, but also the entire Big Ten Conference record.

“This is a special night. My family was there, the assist record that was held down for 20 years… that’s a lot of assists. I’m very blessed to be in this position right now,” said Winston. “…For him (Cleaves) to be one of my biggest supporters, he was rooting for me the whole time, pushing for me to go get it. You know, that’s all love right there.”

Sophomore Aaron Henry started this game with four points of his own and an assist to Xavier Tillman, helping put the Spartans in the lead. Winston then got a rebound and fed a pass out to Gabe Brown for an and-one layup. This was the aggression the Spartans needed, leading 10-2.

Henry continued to drive, setting up Brown for a three that put Michigan State up 15-5. Henry then got an assist from Tillman to set him up for a three. The Spartans continued to lead the Badgers 21-9 with 8:29 left in the first half. Brown led the team with nine points, followed by Henry with seven and Tillman with five.

Freshman Rocket Watts took advantage of an assist and lobbed it to Tillman for the alley-oop dunk. MSU ended the first half with a dominant performance, leading 35-20.

The second half began with four points from Michigan State. That didn’t last long as Wisconsin came back in the game thanks to a 13-0 scoring run. Junior Nate Reuvers had eight straight points, including three 3-pointers, and redshirt junior D’Mitrik Trice added a jumper.

With 14:47 left in the second half, Winston tied Cleaves’ Big Ten assist record of 816 with a dish to Malik Hall, who scored through the foul. MSU was still up 41-33, and then continued on an 8-0 scoring run over a course of three minutes. Watts took a jab step and made a 3-pointer from the outside center. Watts continued on his hot streak, as he scored eight in a row for the Spartans with another 3-pointer. With what seemed like good timing for MSU, Wisconsin called a timeout as Jump Around played. MSU continued to lead 55-37, with 10:24 left in the second half.

The Izzone broke out in a frenzy as Watts scored yet another 3-point jumper at the outside right on a fast break. And Gabe Brown, doing what he does best, came in on a fast break for an alley-oop dunk. Izzo wasn’t too happy about his celebration as he did a chin-up on the basket and drew a technical.

With about eight minutes to go in the game, MSU led 63-40. Brown and Henry had 13 points each, followed by Tillman and Watts with 11 each.

The Breslin Center crowd, which included Cleaves, was standing and cheering as Winston was being recognized for becoming the Big Ten’s all-time assist leader.

Wisconsin ended this game on an 13-0 run, but Michigan State still led 67-52 with 2:21 left. While the ending was headlined by the Badgers, it ultimately led to the Spartans taking this game by the reigns and coming out on top 67-55.

“If you really want to compete for this championship, we got to figure out how somebody on the court has got to grab the bull by the horns and change some things,” said Izzo. “So, I felt good about the win, I felt good about the way we played at times… but we did beat a quality team who was playing some of its best basketball.”