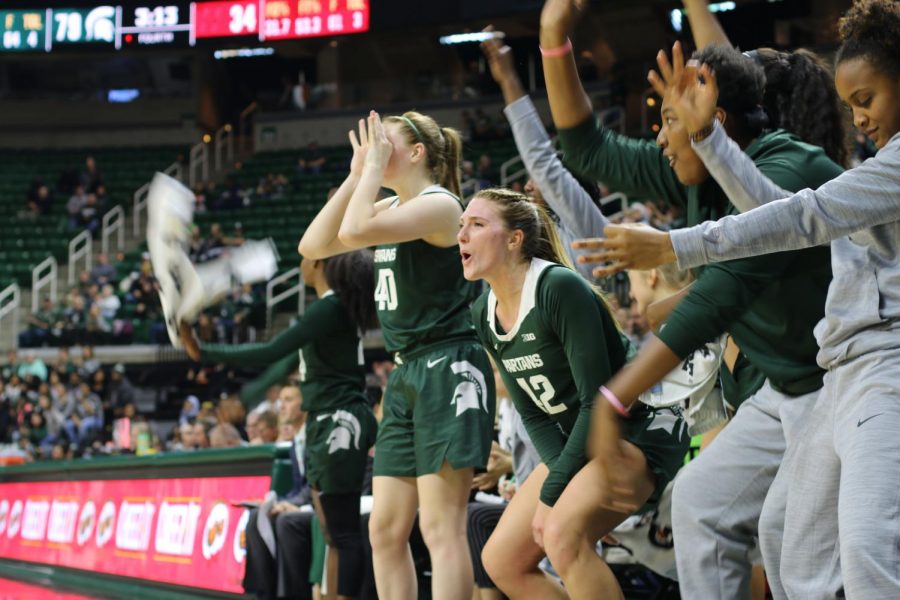 EAST LANSING — Perhaps nothing encapsulates the recent rough stretch of play for Michigan State moreso than the loss of Victoria Gaines, Shay Colley and Mardreika Cook for Sunday’s matchup against the Wisconsin Badgers.

The loss of these three experienced laden frontcourt players would mean that less seasoned role players would be called upon once again to try and end a miserable four week stretch of play that has seen MSU win only one out of its last six contests.

In what was an absolute must-win game for Michigan State, the Spartans would answer the bell in front of a packed crowd by vanquishing Wisconsin by a final score of 69-52. Leading Spartan scorer Nia Clouden would once again notch an exceptional performance with 20 points and five assists.

“We play a lot of young people,” said Clouden. “I try to lead by example and play my best for my team.”

MSU would also get a much needed scoring boost from the bench, as the Spartan reserves combined for 31 points.

“My assistant coaches do all the subbing,” said coach Suzy Merchant “With all of us combined, we have 96 years of coaching experience. I would rather focus on ball screen defense and making adjustments. To keep them fresh is important, but so is having the right kids in the right matchup.”

Wisconsin guard Sydney Hilliard had a strong first quarter with five early points, but had little scoring support from her teammates. At the end of one, MSU held an 18-12 advantage over the Badgers.

This extended Badger run was caused in large part by forward Imani Lewis who registered 12 points and nine rebounds in the first half.

Despite the success of Lewis, MSU would finish the second quarter strong and go into the break with a 34-33 lead over the Badgers. Clouden would lead the Spartans in scoring with 11 first half points.

The Spartans would come out of the break clicking on all cylinders. A pair of Clouden treys would push the MSU lead to a dozen halfway through the third.

All in all, Clouden would accumulate nine third quarter points that would help the Green and White leap out to a 51-40 lead at the end of the third.

Clouden and company would continue to hold serve in the final frame en route to a 69-52 final. In what was a must-win contest, the Spartans responded from a tough second quarter and gave the jam packed crowd something to celebrate.

One player who had a strong second half was Tory Ozment. She credited her strong-willed attitude by netting her eight points in the second half.

“When I get out on the floor, I want to be the tougher person,” said Ozment. “I want to play harder and show more heart.”

“She was tough to defend,” said Ozment. “Our main focus in the second half was stopping the post play. My goal was to be tougher with her and not let her get the ball.”

With the win, the Green and White improve to 2-3 in conference play and 9-7 overall on the season. The Spartans will be looking for their 10th win of the season when they welcome heated rival Ohio State to the Breslin this Thursday.