Spartans fall to Michigan Tech in first round of GLI 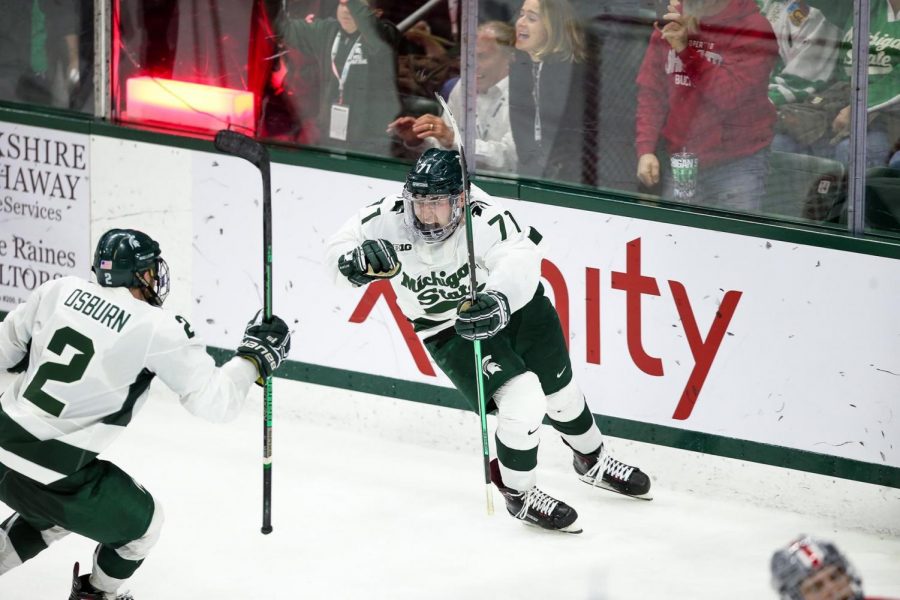 DETROIT – No. 18 Michigan State and Michigan Tech opened the 55th annual Great Lakes Invitational at Little Caesars Arena on Monday afternoon in game one. Michigan State has taken part in every GLI since 1979 but has not won the tournament since 2009.

“Our job now is to coach and get the guys ready for tomorrow,” said head coach Danton Cole. “We can do some things better, and we will tighten those things up.”

The first period was action packed from the very beginning. Michigan Tech took a penalty 22 seconds into the game and that power play led to a Michigan State goal from Sam Saliba. The rest of the period was pretty quiet until the Huskies tied the game up on a power play of their own with 1:45 left in the first.

The second period got off to a quick start with a Spartan goal just like the first. But this time it was a Logan Lambdin breakaway goal to give the Spartans the lead back. Once again, much like the first, after the Spartans early goal, the scoring stopped.

There were good chances and a decent amount of penalties, but for the most part it was two evenly-matched teams not giving an inch. Unlike the first, the Huskies did not answer back later that period and Michigan State took a 2-1 lead into the second intermission.

The third period did not start off with a Michigan State goal unlike the first two, because the Huskies were the ones who struck first in the final period on a shorthanded goal from Tommy Parrottino to tie it up at two goals apiece.

The game was even all afternoon and both teams like to play the same way and tried establishing physicality. The game was even until just under five minutes to play when the Huskies took a 3-2 lead thanks to a great individual effort by Eric Gotz, getting his own rebound and putting it away for a goal.

“It was a good chance for us to press,” said senior forward Sam Saliba, talking about their third period power play that Michigan Tech scored on. “Even if you don’t score you don’t score, you get momentum off the power play, and then they come down and score and it’s a huge momentum swing.”

The Huskies would hold that lead until the end of the game and even add one more empty net goal to secure a victory and a chance to play for first place Tuesday afternoon.

“Throw that out, it’s our next game,” said Cole, talking about tomorrow’s third place game. “It’s kind of how the Big Ten is, if you stumble on Friday you’ve got to recover and get something the next night.”

Both teams will play for first and third place, respectively, tomorrow at Little Caesars Arena. The Spartans will play at 11:30 a.m. and the Huskies at 2:30 p.m.