Spartans look ahead to face LSU Tigers in the Bahamas 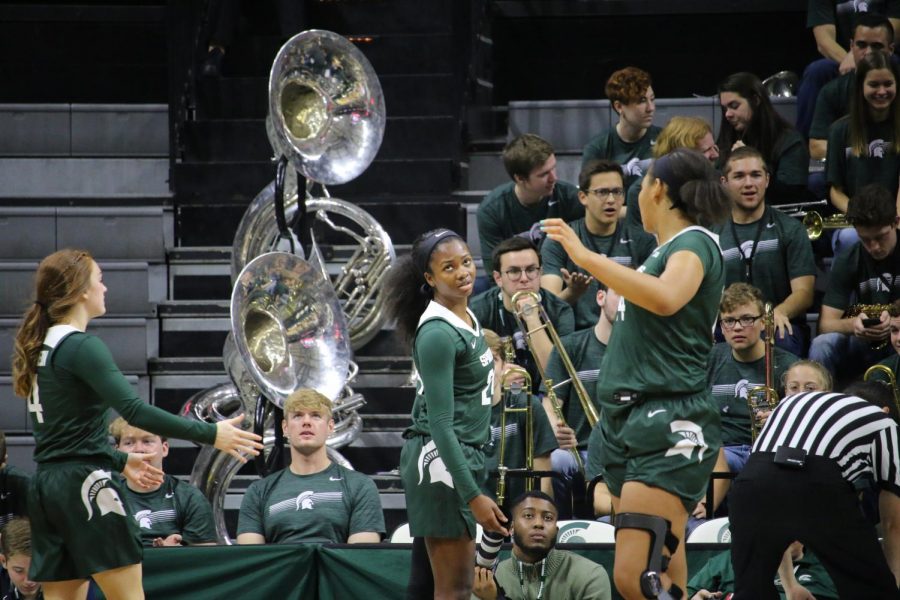 EAST LANSING — After a resounding 79-34 win over the visiting Hartford Hawks on Sunday, the Michigan State Spartans will head to the Bahamas for a two-day slate of games that will see MSU play the LSU Lady Tigers and either the Memphis Tigers or the Kansas State Wildcats.

Without Shay Colley and Victoria “Coco” Gaines on Sunday, the Spartans received key contributions from fringe rotation pieces, such as freshman Julia Ayrault and Kayla Belles. Ayrault led all scorers with 14 points and four rebounds, while Belles notched her first career double-double with 11 points and 11 boards in the absence of Gaines.

Behind the stingy defense of on ball defenders Tarryn McCutcheon and Moira Joiner, Hartford leading scorer Jada Lucas was held to only eight points on the game, a season low.

After four relatively stress-free wins in their first five games of the season, the Spartans are about to enter a gantlet of difficulty that involves playing four ranked opponents over a five game span. To make matters worse, none of these ranked contests will be from the friendly confines of the Breslin Center.

The LSU Tigers are coming off of a mediocre season that saw them finish with an overall record of 16-13. The Tigers were a middle of the tier team last year in the SEC, as indicated by their 7-9 conference record.

However, LSU is having a solid start to the season with an impressive win against Rutgers. The Tigers are currently 5-1 on the season, with their only loss coming to ranked Florida State.

The Tiger scoring attack is led by returning guard Khayla Pointer, who was second on the team in scoring last season, as she averaged 12 points for LSU. Center Faustine Aifuwa will also be a key contributor for the Tigers this season, as she registered 9.6 points per game and 6.4 rebounds per game last season.

Head Coach Suzy Merchant was hopeful, but unsure as to what the status would be for Colley and Gaines heading to the Bahamas. She mentioned how Colley has been participating in practice for MSU, while Gaines has been held out as a precautionary measure.

If Gaines or Colley are unable to suit up for the Spartans, it would be expected that Moira Joiner and Kayla Belles will get the starting nod again.

Michigan State has only been truly challenged once in their first five contests. The Spartans are about to be exposed to the brutal competitive reality that is Division I Women’s College Basketball.