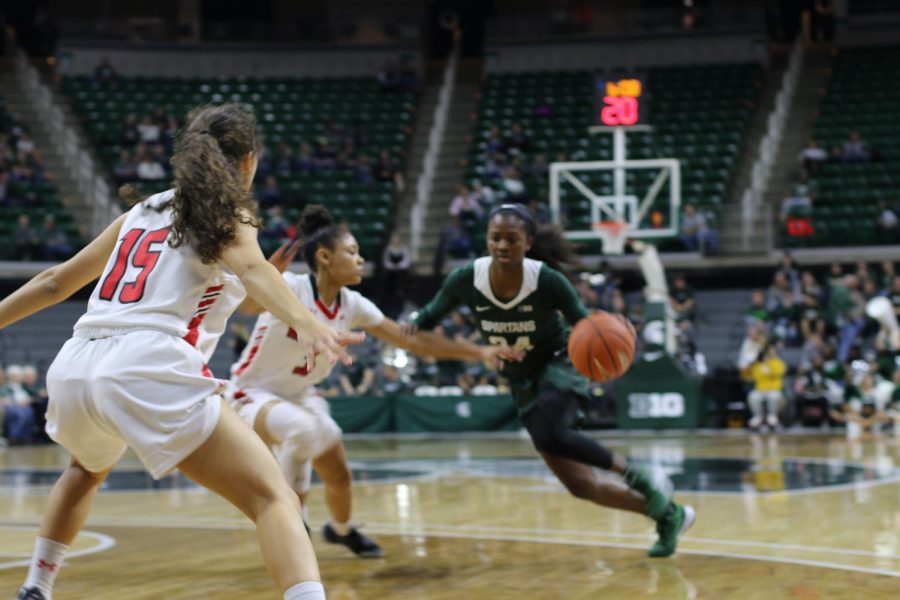 The Michigan State Spartans women’s basketball team continued to roll on Sunday afternoon, advancing to 5-0 on the season with a 79-34 rout of Hartford.

While strong  team play and good ball movement were among the reasons that the Spartans won, here are three key factors that helped Michigan State in their blowout win:
Defense
The Spartans put on a clinic in the full court press on Sunday, holding Hartford to only 34 points, the lowest such total allowed this season.

The press defense resulted in a number of turnovers, forcing the Hawks to cough the ball up 29 times.

A large part of that success on defense is attributable to the play of Taryn McCutcheon, who produced fourteen points, four rebounds, and a steal, while also constantly harassing the Hartford ball carriers.

“It doesn’t matter if she plays twenty-four minutes like she did tonight, or it’s a triple-overtime game and [McCutcheon’s] got forty-four minutes on the floor,” said MSU head coach Suzy Merchant. “She is diving, hustling, defending, [and] communicating.”

McCutcheon’s hustle on the floor was unmatched, and it led to a host of problems for the Hawks on offense.
Transition Offense
Any basketball coach will point out that great defense produces easy offense, and Merchant’s squad showed exactly why.

The Spartans managed to turn the 29 turnovers from Hartford into 30 points, along with sixteen points scored on the fastbreak.

The strong defensive outing for the Spartans helped create a large number of easy baskets on the other end, which was a major key in their lopsided victory.
Ayrault Provides Key Spark Off Bench
Freshman Julie Ayrault was on a mission from the moment she checked into the game, connecting on her first five shots and tallying 13 first-half points for Michigan State.

And she was able to read Hartford’s defense to near perfection in the first half.

While she only managed to score one point with limited minutes in the second half, Ayrault came up with big plays for the Spartans at a critical time as they established separation on the scoreboard.

Despite her strong play, Ayrault remains focused on team success.

“I think it was super nice, but we got the win, so that’s what’s more important to me,” Ayrault said. “Everyone played great … not much more you can ask than that.”

Ayrault and the rest of the Spartans look to remain unbeaten as they head down to the Bahamas to face LSU in the Junkanoo Jam on Nov. 29.