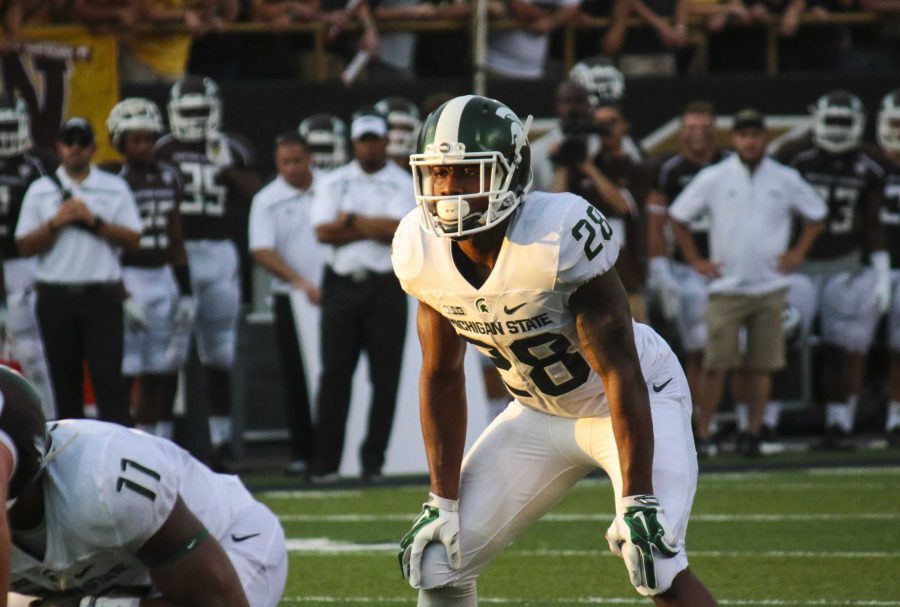 It was a 39 yard passing touchdown to Cornelius Johnson with 2:33 to go in the game, a busted coverage on the play as Johnson waltzed into the end zone, that proved the back breaker and established who was the best team in the state of Michigan.

“I mean they were just throwing the ball all over the place,” junior linebacker Antjuan Simmons said. “The only had like, what, 60, 70 rushing yards.”

The Wolverines defense continued its dominance this season. It intercepted Brian Lewerke twice and held him to just 166 yards in the air and one touchdown. Lewerke completed 17 of his 30 attempts. Michigan also stifled the Michigan State run game and held the Spartans to 64 yards on the ground as a team. The Spartans averaged 2.3 yards per rush while Michigan finished with 133 yards on the ground.

On the other side, Michigan State, a team coming into the day plagued with injuries, were hurt even more. Josiah Scott and Luke Campbell all left the game due to injuries.

Michigan State’s offense showed bursts of positive plays, but couldn’t keep the offense consistent throughout. Lewerke struggled to find receivers and receivers struggled to find openings in the Michigan secondary. Elijah Collins, who ran for 172 yards last game against Illinois, ran for 27 yards. Michigan State as a team was held to 220 yards to Michigans 467.
Michigan State play calling
Michigan failed to convert on fourth down on its second drive. This led to a Michigan State touchdown with the help of a couple key plays. The highlight of those was the Cody White near touchdown with just over two minutes in the first quarter but then two plays later, Lewerke found fullback, Max Rosenthal for a one-yard touchdown pass with 1:48 to go as MSU took the lead to start, 7-0.

Michigan State had a similar drive in the second half, converting on fourth down, the exact same way it did the first time then a Julian Barnett misdirection sweep to the outside went for a first down but the drive ended in a field goal by Matt Coghlin.

However, the offense could not find any consistent success. Michigan State had to punt on five drives and turned the ball over two other possessions.

“We have to make sure we are on the same page offensively,” Lewerke said. “Just too many mistakes.”
The rivalry continues
Tempers always flare when these two teams meet. Last year, Michigan’s Devin Bush tore up the logo at midfield in Spartan Stadium last year. In the first half of Saturday’s game, three unsportsmanlike conduct penalties were called. A total of six unsportsmanlike penalties were called in the game.

Two of those were called on one play, both on the Spartans. After a 20 yard gain through the air from Lewerke to White, both penalties were assessed. Instead of a 20-yard gain for Michigan State, the play turned into a 10 yard loss. Michigan State was forced to punt later in the drive.

“The refs were being touchy about the calls,” Lewerke said. “Respectfully so. They wanted to keep everyone safe in a rivalry game.”

After Lewerke threw his second interception of the game the Michigan State offense went over to the Michigan sideline and had a confrontation with the entire Michigan bench. The ensuing play, Jacob Panasiuk hit Patterson well after he threw a pass.

It resulted as a flagrant foul on Panasiuk, and he was disqualified from the game.
Shea’s day
Shea Patterson dominated the entire game. He completed 72.7 percent of passes going 24 for 33. He racked up 384 yards in the air and added four touchdowns to four different receivers.  Shea accounted for 82 percent of the total offense. He also completed passes to eight different players. Bell was his favorite target, catching nine targets. Donovan Peoples-Jones, Nico Collins, Nick Eubanks and Cornelius Johnson caught the touchdowns from Patterson.

“We got two more games,” Simmons said. “There’s still things to play for. I mean we could get these two wins and be bowl eligible. We still have seniors, guys like Kenny, Raequan, Mike, Brian. We still got guys like that fighting.”

Michigan State heads to Rutgers next weekend with the kickoff set for noon. That game can be found on Fox Sports One.