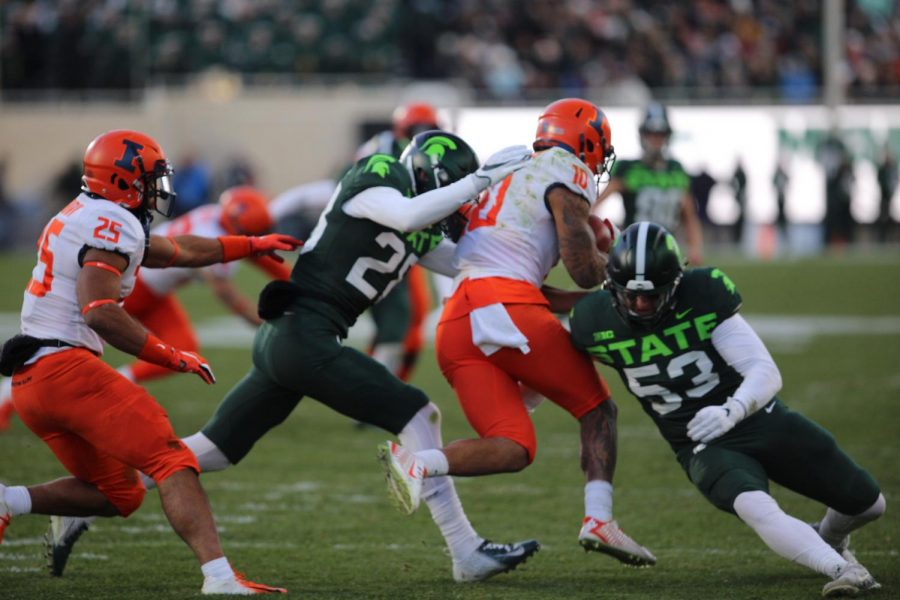 Was it the 10-7 home loss to unranked Arizona State, way back in the third week of the season? After all, this was a game that dashed any hopes for MSU being considered as a national contender.

Or maybe it was the embarrassing 34-10 road loss in Columbus, Ohio, proving once again that the Spartans didn’t belong in the conversation with the top teams in the country. Surely it doesn’t get much worse than a blowout during a nationally televised primetime showcase.

Or how about the 38-0 shoutout to Wisconsin? The 28-7 home loss to Penn State? The six players lost to the transfer portal? How about the total of two touchdowns scored in the month of October and the suspension of Joe Bachie? Surely we have by now reached rock bottom!

It turns out rock bottom can always get a little deeper. Michigan State has proved that once again, after coming out of a bye week to lose in a heart-breaking game at home, 37-34 against Illinois. What’s most disturbing about this game, however, is not the final score, but the manner in which the loss occurred.

Michigan State came out of the gates hot to start the game, taking a first half lead 28-10. The Spartans looked to have remedied some of their offensive struggles, scoring more in the first half than they had the previous three games combined. With the offensive line dominating in the trenches, quarterback Brian Lewerke and running back Elijah Collins both exhibited impressive first-half performances.

However, a defensive lapse late in the second quarter allowed for a 46-yard Illinois touchdown completion as time expired, sending the Illini into the half with the momentum behind them.

As a result, the second half highlighted the Spartans we’re more accustomed to seeing, with the defense giving up three touchdowns, and the offense turning the ball over twice. The tighter the Illini closed the gap, the more erratic this Michigan State football team became. Lewerke fumbled inside MSU’s own 10-yard line, resulting in an Illinois touchdown, before throwing a pick-six later on in the fourth quarter that ended in one more.

Outside of one red zone interception, the Michigan State defense was unable to slow the storming Illini comeback. The game ended after a pass interference penalty allowed for a new set of downs for Illinois on the MSU goal line, ultimately resulting in an Illinois go-ahead touchdown for the win.

After such a gut-wrenching loss that at one time had enraptured all of our hope and belief in the team, and at another had us confronting the spirit-crushing harshness of reality, what do Spartan fans have to expect going forward?

The simple answer is more of the same. This type of Michigan State performance has transcended anything that at one time could be identified as a slump, and instead become incorporated into the recent culture that is Michigan State football. The offensive woes have persisted all season and are not going anywhere, while the defensive squad that at one time was considered among the top in the nation has fallen to a passive mediocracy.

At this point in the season, the Spartans look forward to another tough matchup against in-state rivals and No. 14 ranked Michigan, at a time when the only opponent that truly matters in their games is themselves. This game is significant in relation to head coach Mark Dantonio, as it will most likely be a major determining factor in his future at Michigan State after suffering four straight losses.

On the brighter side of things, MSU is coming out the other side of one of the toughest stretches of games in college football this year, one that will include four out five games against teams ranked in the top 25 of the nation. As they prepare to travel to Ann Arbor and take on the Wolverines next weekend, Spartan fans can only hope they find some way to exercise their inner demons before the contest.