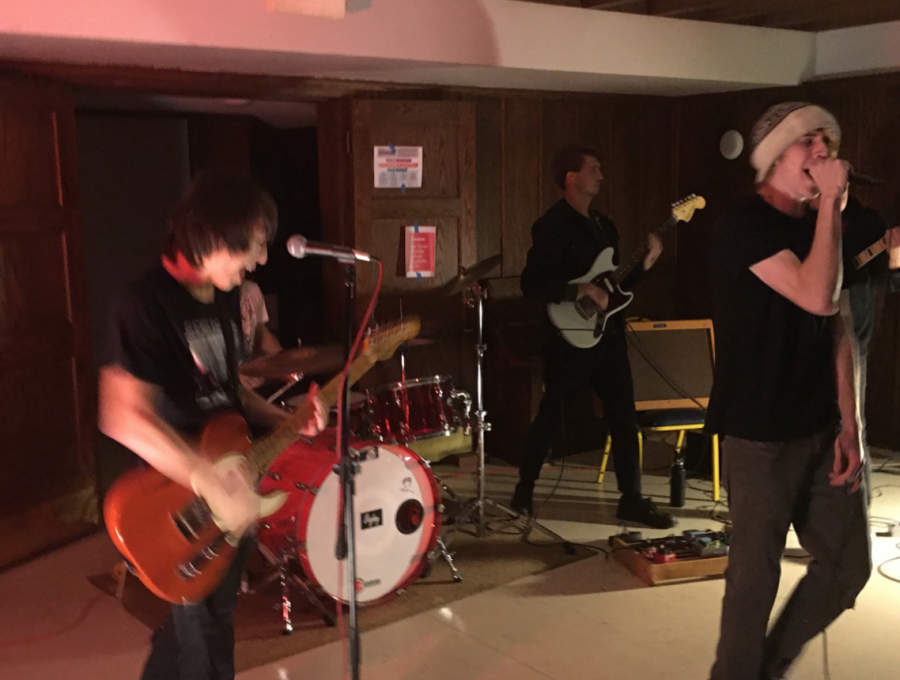 Midwestern Emo is teeming with life in the flannel draped basement of Ann Arbor’s Metal Frat.

Sigma Phi, better known as “Metal Frat,” is a University of Michigan fraternity known for their DIY basement shows, as well as its status as one of the most influential centerpieces in the spread of math rock and midwestern emo. Booking groups belonging under the mathrock, post-hardcore and emo label, reputable bands like La Dispute and A Wilhelm Scream have performed there during their infancy.

Within the cozy and cigarette-caked basement of the Lincoln street home, scene goers from all around came to watch the show unfold.

The frigid, ambient emo pop of Ness Lake perfectly captured the bitter feelings of depression and unrequited love in their nocturnal, emotive set. The slight reverb created a sense of self-imposed detachment among the sustained and exhausted vocals. The grainy kicks of his instrumentals crafted a wonderful dichotomy between their sharp tamber and his droning voice.

Flight Patterns contrasted Ness Lake heavily, but rather than the emotional bitterness akin to a Michigan winter, their set was filled with pop-punk schisms of complex riffs and tongue-in-cheek lyrics. Songs like “thank god for brollinger” highlight their jovial energy with its energetic guitar and half-jest vocal melodies. Meanwhile, the mellow and bittersweet slow jam of “if ur leffen than im chillindude” evolves into the dance floor boot squeaks of a suburban mosh pit with its hypnotic and plucked midway transition.

Brooklyn-based band Peaer functioned  as the headliner during their first show in Ann Arbor. The idiosyncratic melodies and punchy drumming of the track “Don’t” wonderfully contrast the garage-esque feedback of the underlying guitar chords into a slow burning power pop anthem. The syncopated vocal/guitar melodies are tastefully synergetic during their performance of “Like You,” abs show the permeating groove of pop seeping into the relaxed vocals and finger-slurred guitaring.

Finally, Dogleg came on with the reserve energy of Ian Curtis’ poltergeist. Dancing throughout their set as they strum their chords with the ferocity of a failed midterm. The convictive and animated playing makes the dim basement transform into. Their off-the-wall movement giving almost a second wind to the chill atmosphere, to once again cause an earthquake with the footsteps of the band and crowd alike.

These bands represent the differences in the trends of American DIY: the somber and bittersweet ramblings of an intangible emotion; the high-school fuckups of youthful reminiscence. The adolescent dancehall of digital burnout and the post-hardcore drunkenness of punk at its finest.