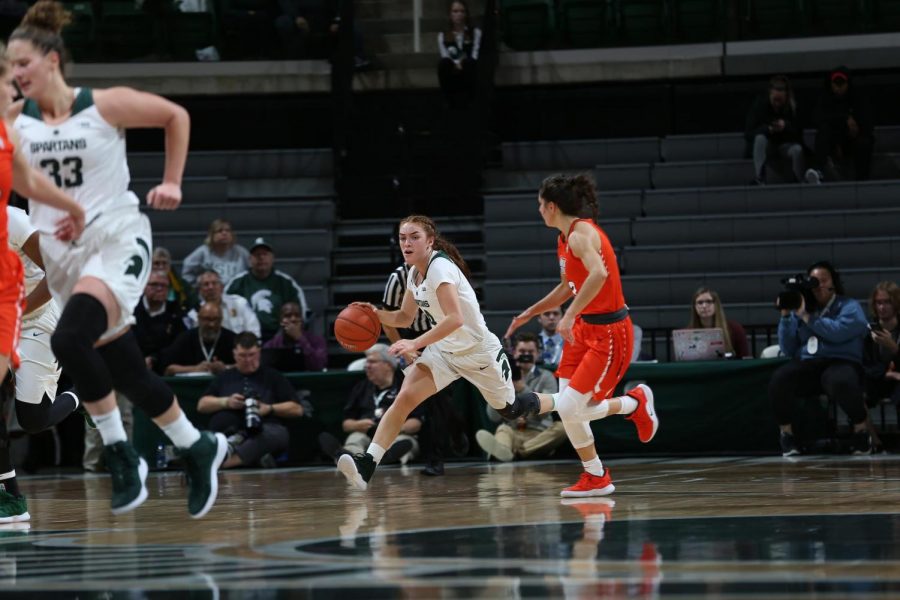 EAST LANSING – Shooting 30% at halftime is never a welcome sign, however if it’s going to happen, any coach would tell you that they would rather see their team play this poorly earlier in the season than later in it.

Accordingly, despite a poor shooting performance in the first half, Michigan State and star sophomore guard Nia Clouden did enough to bury the visiting Eastern Michigan Eagled by a final score of 85-50 on Tuesday night.

Clouden would lead all scorers with 23 points scored. Despite the overall solid performance, the mood at the Breslin Center was one of wait and see after All-Big Ten selection Shay Colley rolled her foot and was taken off the floor without putting any weight on her leg.

Clouden reflected on her strong performance and claimed it was a result of strong offseason work.

“Everyday I would get in the gym and shoot 500 shots,” Clouden said. “I would do that everyday over and over. I think I have come a long way, and being in the weight room has also helped.”

Nervousness is to be expected when the season tips off in front of your home crowd. Regardless, the first quarter of action was disappointing for the Spartans. The Green and White would shoot a paltry 3-for-17 from the floor. The one constant in the first and the half in general was Clouden.

What little success the Spartans achieved in the first half was mostly derived from her driving to the bucket and getting fouled. At the end of the first half, she had already scored six points out of her 16 total from the line. Freshman Julia Ayrault would also be a pleasant early-game surprise for MSU, as she registered two key first-half buckets to keep the Spartan deficit at a manageable distance.

The offensive rhythm of the Spartans would pick up a bit in the second quarter, as Michigan State would rally from an early eight-point deficit, courtesy of back-to-back 3-pointers from Clouden and Tory Ozment. Subsequent baskets from Kayla Belles and others would push the Spartan lead to six.

Despite a late rally at the end of the half from the Eagles, the host team would go into the locker room up by a score of 31-29. Considering the fact that neither Colley nor Taryn McCutcheon scored in the first half, having any lead of sorts was a welcome sign for MSU.

At the half, Merchant mentioned how she didn’t yell at her players, rather she was at a loss for words.

“I didnt even yell at them, I was just like wow,” Merchant said. “I didn’t have to say a whole lot. We are better than that and I was disappointed.”

MSU would come out of the locker room on a torrid scoring pace, courtesy of two consecutive McCutcheon 3-pointers. The floodgates had opened for a dormant Spartan offensive attack. After an EMU timeout to stop the bleeding, it was Clouden again who delivered with a coast-to-coast basket plus the foul.

In a half quarter, MSU had increased its lead from two to 14. McCutcheon would register 10 points in the third, along with eight points for four-star recruit Alyza Winston. All in all, it took the Spartan offense a half to wake up, but when it did, the Eagles could not stop it. MSU would ride 64% shooting in the third to a 30-point lead. Michigan State would outscore EMU 33-3 in the third.

“We turned them over and offense led to defense,” Merchant said. “We made shots. In the first quarter we shot 17%.”

What was a joyous occasion would soon grow eerily grave in the fourth, as Colley would turn her foot and need assistance coming off of the court. The Spartans most valuable asset was now a question mark in terms of availability. MSU would cruise the rest of the way to a comfortable 85-50 win, but the outcome of the game had taken a backseat to the status of Colley.

“She was in the locker room, so I’m not sure,” Merchant said on Colley’s status. “I didn’t hear so we will wait to hear and see.”

The Spartans will welcome the University of Detroit Mercy Titans to the Breslin on Friday at 7 p.m. That will be the last game for the Spartans at home until Nov. 21, when they welcome in the Oakland Golden Grizzlies.