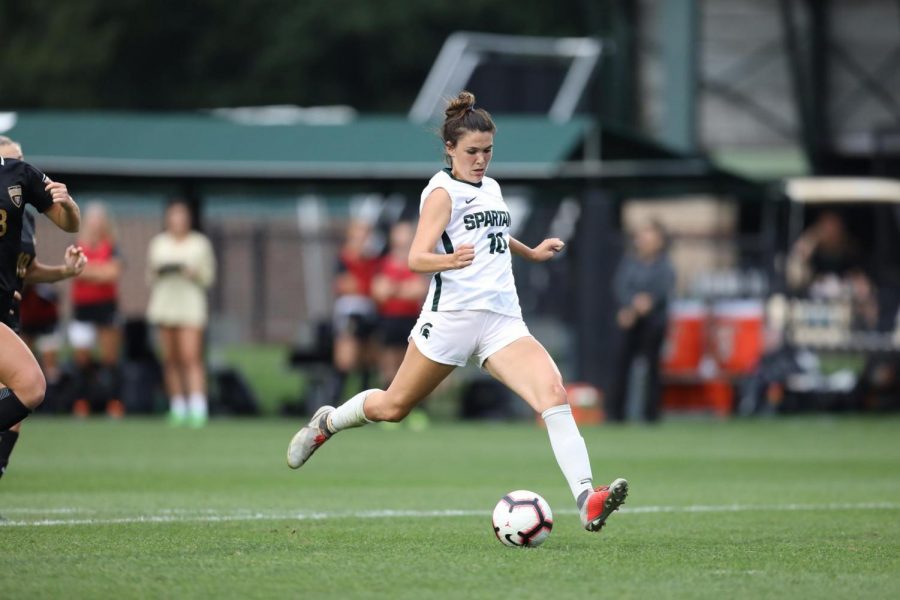 EAST LANSING — The Michigan State women’s soccer team concluded its regular season on a rainy Wednesday afternoon in East Lansing against the Indiana Hoosiers, who scored the decisive goal in a 1-0 victory.

With this victory, the Hoosiers secured a place in the Big Ten Tournament, while the Spartans failed to make the tournament and will now look forward to the 2020 season with a young group of players.

The Spartans went into their final game of the season with no wins in their last seven games. They recently fell to No. 21 Rutgers on Sunday, Oct. 27, when they were beaten 3-2 at home.

The Spartans last five matches have been decided by just one goal, which showed their competitiveness but also their lack of confidence to close out games.

“We’ve been competitive over the last few games,” said MSU head coach Tom Saxton. “But we’re not able to capitalize on the few chances we get.”

Indiana, on the other hand, has been competitive in the Big Ten and they needed a tie or a win against the Spartans to secure a spot in the conference tournament.

The Hoosiers lost a little bit of momentum in recent games, as they were winless in their last three matches.

They were tied for seventh place in the standings with 11 points alongside Northwestern, Nebraska and Purdue.

Indiana’s defensive performances this season have been the best for the Hoosiers since 2013. They’ve kept a clean sheet against nine teams this season, including Michigan State on Wednesday.

“Give credit to their defense, they are a great defensive team,” Saxton said.

Both teams had numerous chances in the final third of the pitch but they failed to exploit those opportunities.

“We came out and dominated possession in the first half, but we weren’t able to generate a lot of (quality) shots,” Saxton said.

Both sides came out of the half with the same aggression from the last half. The Spartans connected many passes, but they ultimately lost the ball in the physical battle.

Indiana played aggressively and very physical, which limited the amount of time the Spartans had on the ball. They won more 50/50 balls in the air and on the ground than the Spartans.

At the 74th minute, the deciding goal for Indiana was scored by midfielder Avery Lockwood, who volleyed the ball into the lower left corner of the goal after the ball was unsuccessfully cleared by a Spartan defender.

Saxton, disappointed in the end, was satisfied by the way the Spartans did not let their heads down and kept playing.

“There’s never been an ounce of quit in this team,” Saxton said. “We just have to learn how to make big plays”

The Spartans’ final game of the year had a bitter taste at the end, but the coach and the rest of his team look forward to the 2020 season.

“We have a young group coming back next year, so we’ll be optimistic and positive to come back and win,” Saxton said.