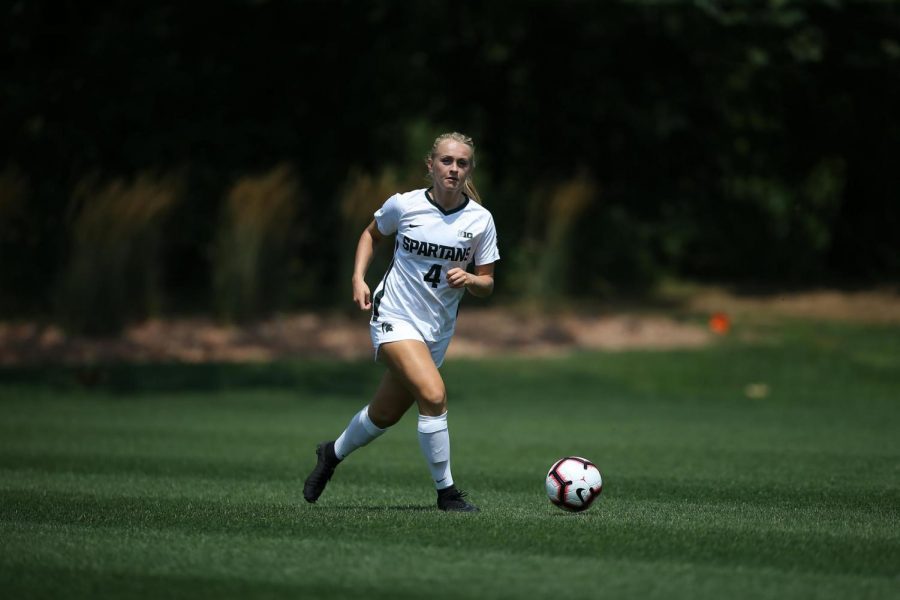 EAST LANSING – Entering Sunday afternoon’s contest, Michigan State found itself stuck in an inopportune position late in its 2019 season. The Spartans entered the game last in the Big Ten standings, ineligible for postseason play while staring down a formidable opponent in No. 21 Rutgers.

Michigan State did open the game with the aid of added energy, thanks to the team’s Senior Day, as the Spartans honored the 12 members of their prolific senior class prior to the game. This energy would prevail, but not span the distance, as Michigan State fell to the Scarlet Knights by a final score of 3-2.

The Spartans entered the game winless against Rutgers in the all-time series, that streak was extended with the Scarlet Knights’ sixth straight victory over Michigan State.

Michigan State (8-9-1, 1-8-1 Big Ten) powered through a slow start to claim the game’s first two goals. Bella Jodzis would open the scoring, as she rocketed a shot over the head of Rutgers goalkeeper Megan McClelland from just outside the box, giving the Spartans a 1-0 lead at 11:56.

Team captain Michaela Kovacs wasted no time collecting her team’s second goal, celebrating her Senior Day in proper fashion and giving her team a 2-0 lead with her second goal of the season just minutes later at 17:39.

The Spartans appeared to occupy a favorable spot against a superior team in the Scarlet Knights.

“We felt the key to the game was the midfield,” said Michigan State head coach Tom Saxton. “The game went for us as our midfield went. Our midfield started to find each other, they gave us space to play there and we started to connect passes and open up opportunities. We scored a couple really nice goals.”

Michigan State wouldn’t enjoy this advantage for long, and a 2-0 lead that many call the most dangerous to defend in the game of soccer would quickly dissipate at DeMartin Stadium.

Rutgers first goal of the afternoon would come thanks to a mental error on the part of Michigan State goalkeeper Lauren Kozal.

She aggressively vacated the goal as the Scarlet Knights began to attack, but couldn’t corral the ball, as it went past her and Nneka Moneme collected a crucial goal with under 20 minutes to go in the half.

“The first goal was disappointing on our part,” said Saxton. “Just a communication breakdown.”

The Scarlet Knights quickly netted the equalizer, as the goal scoring kept coming and Amirah Ali sent one past Kozal to tie the game at two goals apiece. Moneme would then strike again, scoring the go-ahead goal for Rutgers on a header following a nifty corner kick play.

Rutgers (14-2-2, 8-2-1 Big Ten) would confidently carry this 3-2 lead into the half, as the team entered the game undefeated when leading after one half of play.

“They’re a dangerous team,” said Saxton. “We knew we had to defend the midfield, and we let them gain territory in our final third. There was miscommunication on the first goal, that gave them as spark to get back in it.”

Protecting their one goal lead, the Scarlet Knights executed a focused defensive effort in the second half. Michigan State would receive opportunities to tie the game, as the Spartans were awarded four corner kicks and fired off five shots in the second half.

Despite these chances, Rutgers would hold on to claim a 3-2 victory on a chilly afternoon in East Lansing. For the Spartans, the defeat marked the sixth one-goal loss in the team’s last 12 games.

“We knew we had space to play, and we knew if we could pressure on their final third that opportunities would present themselves, and they did for the most part,” said Saxton. “Even down the stretch.”

Following the loss, Michigan State remains winless in the month of October and last in the Big Ten standings. The Spartans will look to end their season on a positive note when they take on Indiana at DeMartin Stadium on Wednesday.

“We’ve been very competitive in the last two weeks in some very tight games,” said Saxton. “We want to walk off the field smiling with a win. We’re going to put everything we have into it.”

The Indiana game was originally scheduled to be played on Sept. 27, but was postponed due to inclement weather.