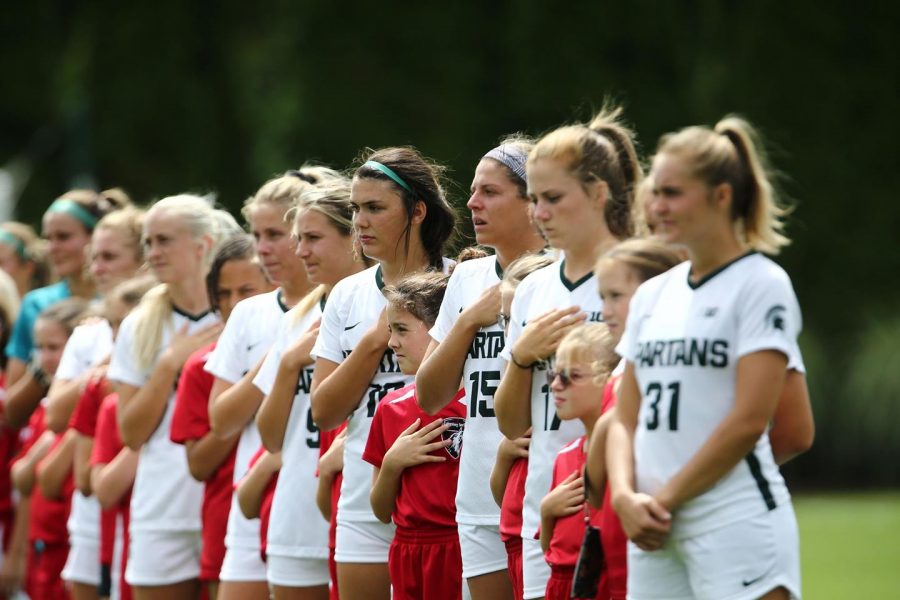 EAST LANSING — How does one measure the quality of a team who looks unbeatable at times when playing at home, but struggles so mightily to perform consistently on the road?

The truth, as with most things in life, is probably somewhere in the middle. Is Michigan State as inferior as their 2-6 away record would indicate? Probably not.

But should we also convince ourselves that this MSU team is truly a conference power based on their 6-2 home record? Also, probably not.

In a contest that was essential to get the Spartans out of the conference basement, the Green and White were unable to hold off Maryland at home en route to a 1-0 defeat at the hands of the visiting Maryland Terrapins.

With the win the Terrapins qualified for their first ever Big Ten Tournament in school history.

At the end of the heartbreaking and postseason hope ending loss for MSU, Coach Tom Saxton felt nothing but pride for the hours of effort that his team has given him over the course of the year.

“This team doesn’t give up,” said Saxton. “They will play the last two games with a great deal of pride, despite not being able to qualify for the postseason.”

Despite a 4-4 conference mark on the season, Maryland has made it a mission to score early and often, which of course results their opponents in being put in uncomfortable situations.

In games where the Terps have scored in the opening ten minutes, they have notched three shutouts and obliterated oppopents by a 16-3 margin.

Furthermore, when scoring in the first five minutes of the game this season, Maryland sports an immaculate 5-0 mark.

The mission for the Spartans was simple: come out hitting on all cylinders and prevent Maryland from playing their uptempo brand of soccer.

So while a scoreless game  through ten minutes wouldn’t normally be indicative of much, the fact that the Spartans were able to deflect the early offensive advances of Maryland was an encouraging sign.

The first part of the game was truly a defensive slugfest, as both clubs struggled to mount an offensive surge.

The first goal of the game wouldn’t be tallied until the 30 minute mark, when Loren Sefick launched a lower left corner shot off of a free kick that eluded MSU goalie Lauren Kozal.

Both of these conference adversaries would continue to trade blows as the second half got underway.

Neither team would break through with a goal through the first fifteen minutes of the period.

As the final frame continued to wear on that early score by Sefick loomed larger and larger. You could feel the tension start to ramp up for the Spartans and the feeling of cautious optimism rising for the Terps.

In a game that saw the Spartans play arguably better than the Terps. It was Maryland who found themselves leading in the only category that mattered with eleven to go.

In what was truly a game of inches, Gia Wahlberg slapped a shot that scattered off to the side netting by the far post. Danielle Stephan had a wonderful scoring chance that went off the crossbar.

MSU was banging hard on the door, but couldn’t successfully knock the door off of its hinges.

Unfortunately for MSU, despite being so close to forcing overtime, Maryland held on to escape with a narrow 1-0 victory.

With the loss, the Green and White are eliminated from any hope of postseason contention.  When reflecting on the game, Walhberg mentioned how the game boiled down to one thing.

“They had better offensive chances than we did,” said Wahlberg. “They capitalized and we didn’t.”

This sentiment was echoed by head coach Saxton.

“They took advantage of a mistake,” said Saxton. “Defensively, we were solid for the most part and the kid scored a very nice goal. We just had one slip up and she played the ball exactly where she needed to. When we had those similar moments, we just couldn’t quite capitalized.”

Saxton also mentioned how not making the playoffs felt for a program that has compiled six winning seasons in the last eleven years.

“This was a game we had to win,” said Saxton.

“We called it a playoff game, because it would have kept us alive for the postseason. I thought the play in the first two-thirds of the game was outstanding. We had one defensive lapse that cost us the game. That’s a tough pill to swallow. It’s a hard thing to do in our sport given that we have fourteen teams vying for eight spots.”

The Green and White will be looking to rebound from this tough loss, as they welcome the No. 21 ranked Rutgers Scarlet Knights to Demartin Stadium this Sunday at 1 p.m.

This coming Sunday will also mark Senior day for the 12 seniors on MSU’s roster, who will be formally honored for their contributions both on and off the field before the contest.