Michigan State prepares to host Rutgers and No. 8 Penn State 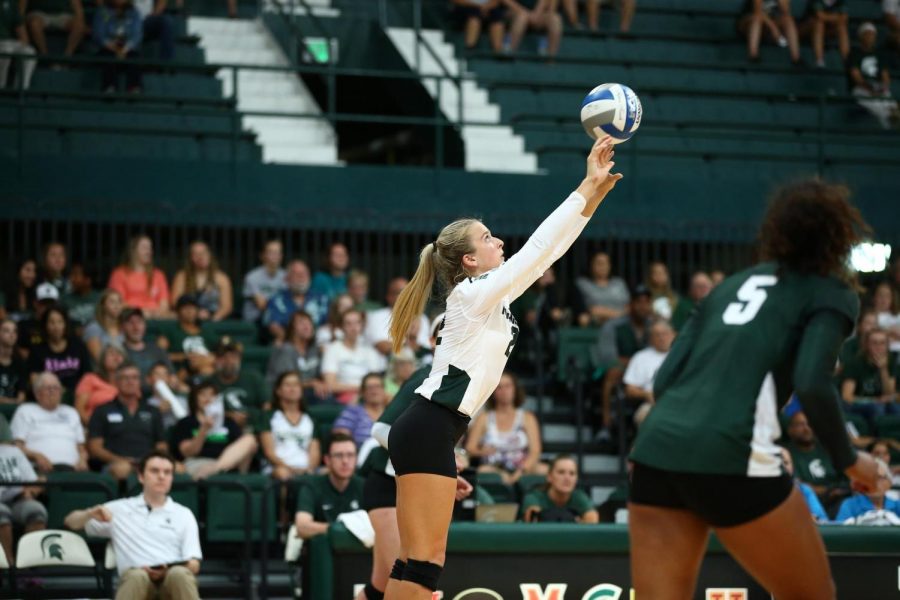 EAST LANSING – After a week three split with a four-set loss to No. 8 Nebraska and a five-set victory against Iowa, Michigan State heads back home to Jenison Field House to host Rutgers and No. 8 Penn State.
Rutgers
The Rutgers volleyball team is struggling to play well in the Big Ten. The Scarlet Knights are currently last in the conference, still looking to get their first Big Ten win of the season.

Rutgers comes into Jenison Field House with tools under its belt including true sophomore outside hitter Tali Marmen, who leads her team in kills by booking 2.38 kills per set, but only hitting .142 at the same time.

In comparison, the Spartans leading attacker is junior outside hitter Meredith Norris, who is drilling 3.29 kills per set and hitting .214. Norris, who came out of her shell this season, books a whole kill more than Marmen per set.

The Scarlet Knights consider one of their strong suits as their blocking on the line, successfully blocking 2.65 blocks per set as a team, good for eighth in the Big Ten. Blocking is their only statistical category to be ranked within single digits.

However, considering that Michigan State is leading the conference in blocks, booking 2.81 blocks per set as a team, Rutgers would have to play considerably well on the net to make a significant difference for the overall match.

It should be an easy three and out for the Spartans.
No. 8 Penn State
It becomes a different story though with the Nittany Lions. The two sides met each other in Happy Valley in both of their Big Ten openers. In that match, the Spartans were swept by then No. 5 Penn State.

Hord currently leads the Big Ten and is fourth in the nation with her hitting percentage with an outstanding .452 hit rate. Gray is close behind her teammate, hitting just under .400, good for fourth in the conference.

The Spartan middles, sophomores Rebecka Poljan and Naya Gros, aren’t too far behind. Poljan is hitting a solid .338 while Gros is just behind her teammate, hitting .332.

The Nittany Lions currently own 2.41 blocks per set, good for eighth in the conference. Similar to the Rutgers matchup, the Spartans, booking 2.81 blocks per set, will definitely have the advantage in this match as well.

Michigan State can also use the home crowd to its advantage. With an average attendance of 3,069 fans per match, which is good for eighth in the nation, Jenison should be packed for this matchup. Perhaps the Spartans will be able to feed a little extra energy off the crowd that they didn’t have in Happy Valley the first time around.

And as a cherry on top, this match is primetime on ESPN. If Michigan State is looking to make a statement to the nation, this is the time to do it.
Where to watch
The Spartans host their weekend matchups at Jenison Field House. Michigan State plays Rutgers on Friday at 7 p.m. and plays No. 8 Penn State on Sunday at 2 p.m. The Rutgers match is available on BTN+ while the Penn State match can be found on ESPN.