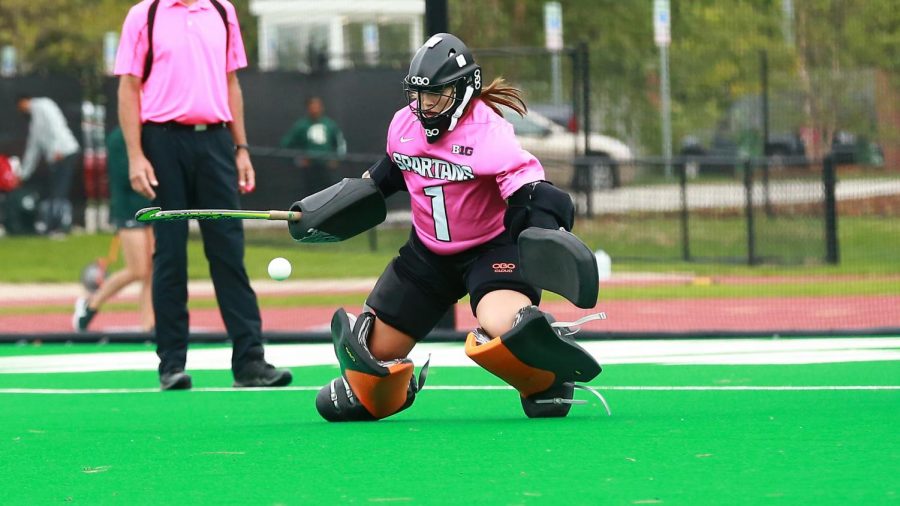 EAST LANSING – It was a slippery, rainy day in East Lansing on Friday. Despite the frustrating weather, the Michigan State Field Hockey team grabbed a 1-0 win against Ohio.

Both teams were evenly matched coming into this game with MSU being 5-6 on the season and Ohio 5-4. MSU has struggled this year with finding momentum after being on a three-game losing streak, but they managed to pull off the win.

Michigan State’s first corner opportunity of the day came with 5:34 left on the clock in the first quarter. Forward Kelsey Keener got a tip in from the left side of the cage, and what looked like an intricate play resulted in the Spartans’ lone goal of the game. Keener was assisted by Nienke Bloemsaat and Aisha Osinga.

“It was actually a give and go,” Keener said. “I saw the ball coming and was able to tap it in with no pressure on me. We worked on rebounding and pouncing on the goalie this week in practice.”

The first few minutes of play started with an Ohio corner that had to be reviewed. The call on the field stood, so Ohio midfielder Kendall Ballard got the quick shot off the corner but it went just right of the net. The Spartans continued to put on the pressure for the last 10 minutes of the first quarter.

In the second quarter, both teams looked evenly matched. There was a lot of pressure on MSU goalie Jade Arundell, but she managed to keep the ball away. This resulted in a corner shot for Ohio, but they missed. MSU seemed to be doing a better job offensively keeping the ball away from the Bobcats.

“Possession. Just simple passing,” Arundell said. “We just focused on passing the ball, communication and our press because we went into the other game (Michigan) not with the press. We just learned it a few days before so we worked on that.”

In the last half, the game immediately looked like a dog fight when the clock began during a sequence that almost resulted in a goal by Ohio. Instead, the Bobcats got their second penalty corner of the day.

MSU’s defense looked shaky against the Bobcats – more than what was shown in the first half. Ballard got ahold of the ball and took a shot on goal but was just wide. Both teams had good chances early on in this quarter, but Arundell stole the show with 10 total saves in the game.

Despite the win, MSU head coach Helen Knull had a strong message for the team as it goes down south on the road tomorrow.

Michigan State will travel to Winston-Salem to face No. 20 Wake Forest on Sunday.