Winslow: Ohio State has arrived, Spartans late to the party

No. 4 Ohio State run game gets rolling, MSU trips up in loss on the road 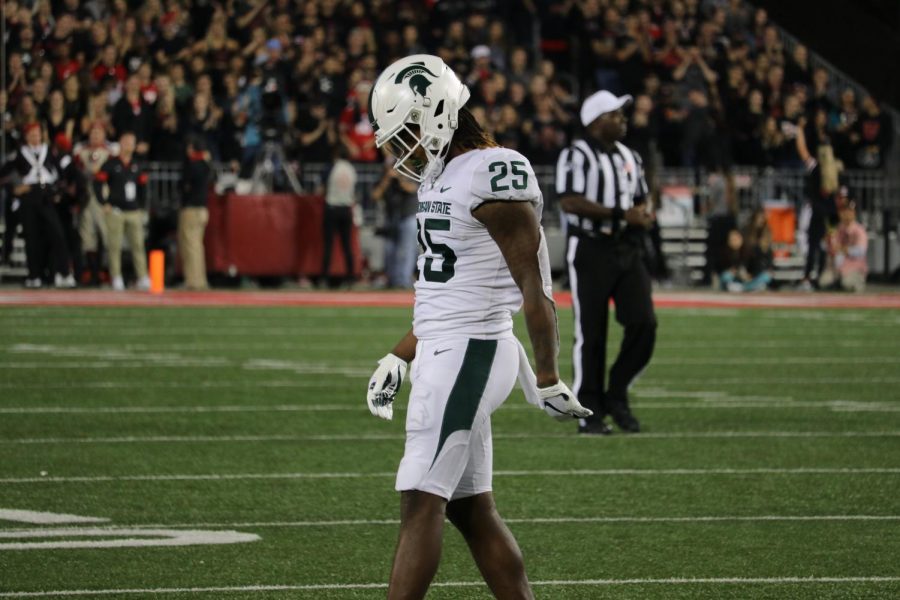 COLUMBUS, Ohio — No 25 ranked Michigan State looked like a team that could compete with the No. 4 Ohio State…through a quarter in a half. The Spartans started off strong with an impressive, competitive start to the game. Able to hold Ohio State to a total of 16 yards. From there, the tone was set with OSU’s run heavy offense.

From then, OSU just owned Michigan State, with 323 rushing yards to MSU’s 67.

Coach Ryan Day talked on Dobbins’ speed and his transformation throughout the season saying  “(Dobbins) would get a little tired when he’d get to that 40-yard range, but he came out the back end of that”.

Dobbin is a physical back, and showed that tonight against a usually tough Michigan State defense.

This was a test for both teams. Could the MSU defense play against good competition and could Ohio State continue doing what they’re doing against a ranked team? Clearly, one of those questions were answered.

Ohio States’ offense keeps rolling and clearly showed that they could play an FAU or Michigan State, and they’ll still run all over you. This Ohio State team is here and coming for the top dogs in the country – pretty much just the teams currently ranked in front of them.

Ohio State showed signs of their National Championship team throughout their dominance against MSU, and should truthfully be viewed as more of a threat.

For Michigan State, this was a test to see how they’d actually compete with a team like Ohio State. Clearly, MSU is not where they want to be. For being considered such a great defense, they allowed 529- total yards, including 323 on the ground.

To be fair, this Ohio State team is better than people give them credit. But 323 rushing yards? Ohio State put up big numbers on a team that allows under 56 yards a game.

Other than those plays, MSU’s defense did play well, Ohio State just played a better game. For MSU, the goal is to move on from the loss, and not look back. They have too much competition ahead with two potential matchups against teams in the top 10, Wisconsin next week and Penn State the following.

The season is not completely over for Michigan State yet. Even with two losses, only one of those are from the Big Ten. No, the College Football Playoff is within reach, but other opportunities are still possible.

Clearly with the success Ohio State has shown early, they’ll make a case for the CFP down the road. Which leaves open the possibility of a New Year’s Six Bowl for another Big Ten team. But it won’t come easy. They still need to travel to Madison, Ann Arbor and host Penn State. This loss was not a good one, but also not a bad one.

The focus for Michigan State this week is move on from the beating, and learn from it. Use it as motivation. Use it in their favor against Wisconsin, because facing Jonathan Taylor a week after you face J.K. Dobbins is no walk in the park.