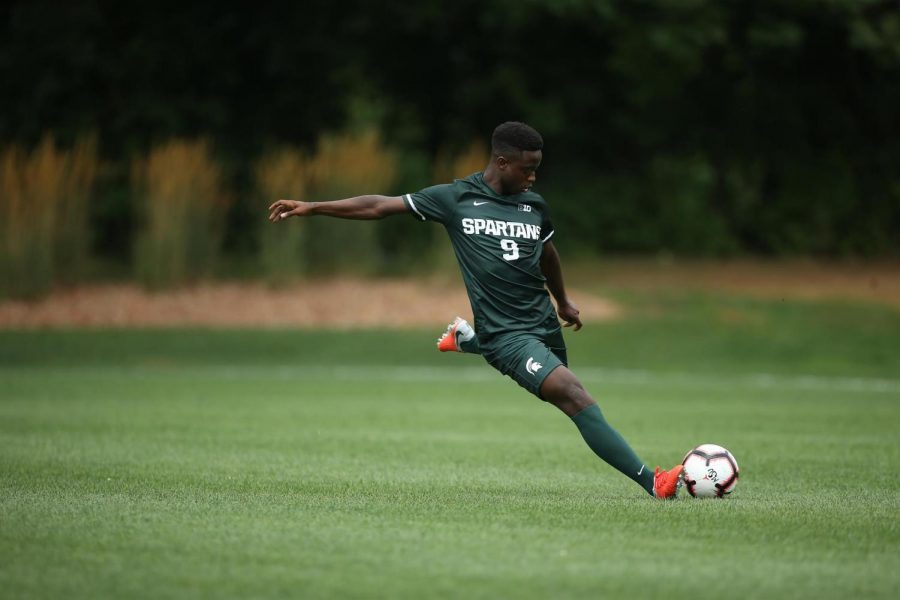 EAST LANSING, Michigan – Still in search of its first win of the season, Michigan State fell to the Western Michigan Broncos 1-0 Friday night at DeMartin Stadium. MSU goalkeeper Hunter Morse turned in an impressive performance with 12 saves, but his team was unable to record a goal as its offensive struggles continued.

The Spartans entered the game on the heels of a 2-1 loss at the hands of Dartmouth, remaining still winless on the season with only two goals scored in the team’s first eight games. Michigan State carried a lopsided 33-2-8 record against the Broncos into the contest, but that wouldn’t change the end result.

“It’s frustrating, we’re just not where we need to be,” MSU head coach Damon Rensing said following the game. “I thought some of our younger guys would be further along by now. I think we need some leaders to step up as well.”

Both teams engaged in a scoreless battle for the majority of the first half, with a physical and scrappy style of play emerging quickly. The Broncos would eventually break the deadlock on a goal from Charlie Sharp, who played valuable minutes after being substituted into the game midway through the first half.

Sharp’s goal was his second of the 2019 season, scored at 31:13 and assisted on by Max Keenan. In 26 first-half minutes, Sharp recorded four shots to go along with his goal.

Western Michigan’s goal would prove to be the only score at the conclusion of the first half, as the Spartans trailed 1-0 after 45 hard-fought minutes of play. The Broncos tallied 11 total shots in the half, forcing Morse to make six saves and keep his team in the game early.

The Spartans, playing once again without key contributors Patrick Nielson and Giuseppe Barone, produced only four first-half shots. Their best scoring chance came when a shot from just outside the box by Connor George sailed high and to the right at 19:13.

Western Michigan committed 12 fouls and received three yellow cards in the first half, with Michigan State also adding nine fouls to contribute to the physical style of play.

“Honestly, we had the game where we wanted it after the first half,” Rensing said. “We were controlling the tempo and wearing them down, and then we gave up an easy counter. That’s the story of the season, we’ve given up easy goals.”

Morse continued his strong effort early in the second half, once again keeping his team in the game with a number of brilliant saves. The Spartans nearly relieved Morse and netted the equalizer at 53:24, as a shot inside the box by Farai Mutatu was snagged by Western Michigan goalkeeper Issac Walker, his best save of the contest.

“I think Hunter [Morse] was really good at shot-stopping,” Rensing said. “He’s still got to work on distribution, he’ll be the first to tell you that tonight. We need to look at what we can do individually to get better.”

Shots and quality scoring chances would be hard to come by during the rest of the game for Michigan State, as the team only recorded four shots after Mutatu’s near-goal. The Spartans’ lone quality chance down the stretch would come when Michael Miller fired a shot just wide and to the left from inside the box at 84:56.

Western Michigan executed a focused defensive effort for the majority of the second half, eventually winning after scoring just one goal, the first-half score from Sharp. The loss was the fourth of the season for Michigan State, with each of those defeats being by one goal.

The Broncos finished with 20 shots on the night compared to nine for the Spartans. Morse finished the night with 12 saves while Walker was only forced to make two saves for Western Michigan. Michigan State now falls to 0-4-2 with the loss, as the team continues to struggle on offense with only two goals in nine games.

“We’ve had some critical mistakes,” Rensing said. “The defenders feel pressure because we’re not scoring goals. We just need to keep grinding away.”

Michigan State will be back in action on Tuesday, as they welcome the Notre Dame Fighting Irish to DeMartin Stadium to close the non-conference season.