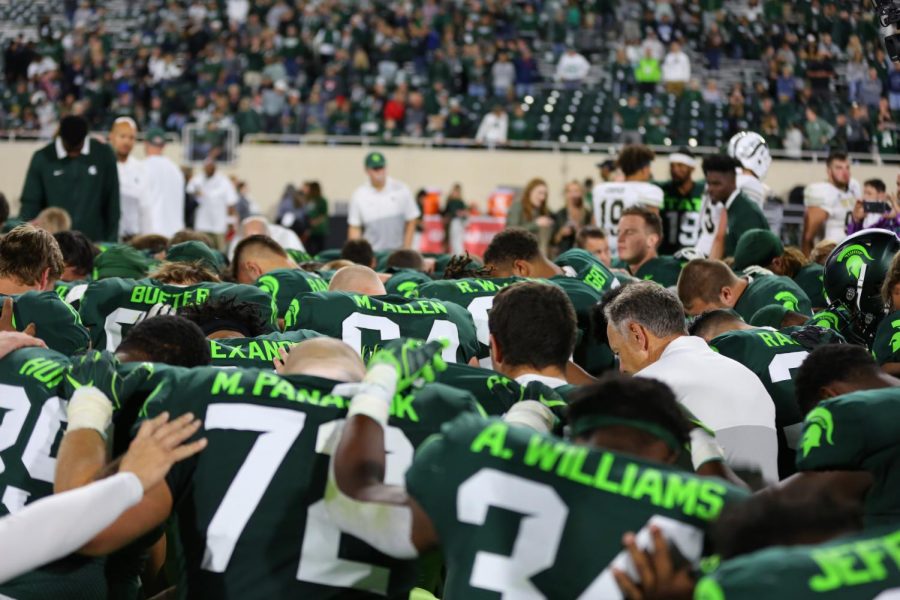 EAST LANSING, Michigan. – No. 18 Michigan State and Arizona State both brought in 2-0 starts to the season into Spartan Stadium on Saturday in the second part of the home-and-home series between the two Power 5 teams.

And with eyes on MSUs offense, the game would be decided by special teams, as Michigan State junior kicker Matt Coghlin went 0-for-3 on field goals en route to the Spartans’ first loss of the season.

After late flags for having too many men on the field caused Coghlin to trot back out on the field after making what looked like the game tying field goal, he missed on a second attempt that sent the ball wide left and the Spartans fell 10-7 to Arizona State at home in a shocking upset.

After last year’s 16-13 loss in Tempe, Arizona, the Spartans looked to win at home and earn head coach Mark Dantonio win No. 110 that would make him the winningest coach in the program’s history.

MSU had the game’s opening drive for the third week in a row. Unlike the previous two weeks, however, the Spartans were unable to score and forced to punt. Arizona State responded with a punt of their own and on their ensuing drive, the Sun Devils recovered a fumble by Brian Lewerke.

ASU was unable to get anything out of that drive as the Spartan defense held them to a three-and-out and another punt.

The first scoring chance for Michigan State came early in the second quarter, but Coghlin’s 47-yard attempt was far right and no good, keeping the game scoreless.

Arizona State was able to drive downfield all the way to the red zone on Michigan State’s 14 yard line. A 15-yard personal foul by wide receiver Kyle Williams pushed the Sun Devils back, forcing Arizona State to settle for a 41-yard field goal by sophomore Cristian Zendejas for the first points of the game, 3-0.

A collection of first downs by Michigan State, including a 36-yard completion from Lewerke to Darrell Stewart, brought the Spartans into the red zone.

Arizona State received the ball at the start of the third quarter, but Michigan State’s defense forced another three-and-out finished with a sack by captains Raequan Williams and Kenny Willekes.

On the ensuing Spartan drive, Michigan State attempts a 4th-and-1 on their own 34, but Connor Heyward is stuffed at the line for no gain and a turnover on downs.

Despite a roughing the passer penalty against Williams that put the ball in Michigan State territory, Arizona State was forced to punt yet again, this time to the Spartans’ 4 yard line. After a safety scare and a short pass to Matt Seybert, a miraculous catch and a 20-yard reception by Darrell Stewart gave Michigan State a first down on their own 23.

Despite two more first downs on the drive, the Spartans were once again forced to punt.

After Jake Hartbarger’s punt was downed at the 8 yard line, the Spartan defense once again contained the Sun Devils and forced their sixth punt of the game. Cody White returned the punt to Arizona State territory, but a holding penalty brought the ball all the way back to Michigan State’s 30 yard line.

A 29-yard reception from Julian Barnett brought Michigan State to Arizona State territory and first down catches by Stewart and White gave the Spartans another opportunity in the red zone.

With the ball on Arizona State’s 14 yard line, Elijah Collins ran the ball twice with the second ending in the end zone for Michigan State’s first points of the day. Coghlin made no mistake on the point after and the Spartans had their first lead in the game 7-3 with 8:37 left in the game.

On the first play of Arizona State’s next drive, Willekes stripped quarterback Jayden Daniels and the ball was recovered by Jacub Panasiuk, but a hands to the face penalty from Raequan Williams gave the ball back to the Sun Devils along with 15 free yards to the 50 yard line.

Arizona State was unable to do anything at midfield as the Spartan defense stuffed them again, setting up another punt to the Michigan State 10 with 5:51 left in the fourth quarter.

After a third down catch by Stewart was overturned, Michigan State was forced to punt from their own 7 yard line. Hartbarger’s 55-yard punt combined with a holding penalty on the return by Arizona State gave the Sun Devils the ball on their own 25 with 3:34 on the clock.

Quick successive passes gave Arizona State a first down before Daniels was able to connect with Brandon Aiyuk for a 40-yard gain to the Michigan State 25 yard line after Josh Butler slipped on the coverage.

On a 4th-and-13 following a false start, Daniels ran the ball himself for 15 yards and a first down in the red zone.

“He realized we only had a three-man rush and ran for it,” Williams said. “So that was good recognition by a freshman.”

Following another run by Daniels to set up first-and-goal on the 1-yard line, Eno Benjamin powered a run and extended the ball into the end zone that put the Sun Devils back on top, 10-7, with less than a minute to play in the game.

With no timeouts to use in their final drive, the Spartans were forced to use a hurry-up offense. A deep pass attempt from Lewerke to White on a third-and-10 drew a pass interference call that gained Michigan State a first down, followed quickly by a 25-yard completion to Stewart to bring the ball to the 24-yard line, where the final field goal fiasco would send the game out.

“I was ready to go to overtime,” Lewerke said. “I knew that team wouldn’t have been able to hang with us in overtime.

“It just sucks that we had to get the penalty”

Michigan State’s offense outgained Arizona State in total yards 404 to 216, but their inability to execute in the red zone was their downfall.

“For us it’s all about the things we can control, we can control on defense,” said safety David Dowell. “We all lost this game as a team, it wasn’t just any side of the ball.”

Despite another strong performance from the defense and a decent showing by Lewerke, Michigan State finishes their home-and-home series with Arizona State 0-2.

Michigan State travels to Evanston, Illinois for its first away game of the season against Northwestern on Sept. 21. Kickoff is set for noon EST.