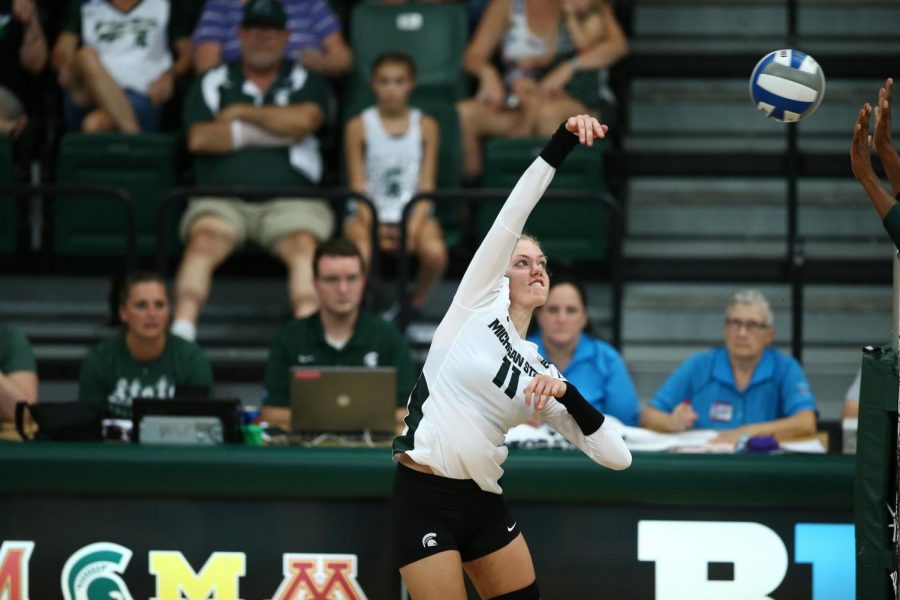 EAST LANSING, Mich. – The Michigan State volleyball team made its home debut Friday with a doubleheader as the hosts of the 2019 Auto Owners Spartan Invitational, playing Indiana State and Cincinnati.

The Spartans opened the day against Indiana State with a dominant performance. In the first set, they recorded a season-high 19 kills, overpowering the Sycamores with their hitting. MSU broke out several runs of 4-0 or better, building momentum through the set that stymied Indiana State’s attempts to answer. Sophomore Rebecka Poljan led the team with six kills as she asserted herself over smaller Sycamore defenders.

Fellow sophomore Naya Gros was pleased with the team’s start.

“We came out strong with high intensity and great ball control,” she said. “We did a great job with spreading the ball. I think that’s what made our team great.”

Indiana State was more competitive in the second set. They looked like they might steal one from the Spartans, showing more creativity in hitting soft strikes that fell between the Spartan front and back lines. MSU’s outside hitters were tested by the Sycamores, who abandoned the middle after Poljan’s first set performance. They took a 10-5 lead early, but the Spartans battled back to tie.

The set was close from there, the teams trading points until Indiana State’s Cassie Kawa put the Sycamores up 18-17. The Spartans suddenly got a second wind and closed the set on an 8-0 run highlighted by consecutive service aces from graduate transfer Audrey Alford.

MSU started the third set slowly, letting Indiana State gain a 4-3 lead. Then the wheels fell off for the Sycamores as the Spartans scored 11 unanswered points, with most coming off of errors. The Spartans didn’t break a sweat for the rest of the set as Indiana State attacked the middle and again faced blocks from taller Spartan defenders like Gros, who recorded four block assists as MSU took the set 25-10.

“We wanted to prove ourselves this season… we’re not the team we were last year,” Poljan said.

Against Cincinnati, the Spartans again got a fantastic start in the first set. They raced out to a quick 8-4 lead off of more strong play from the middle, as Gros picked up a block, assist and a mighty kill in quick succession. They played with a strong pace and showed no sign of being gassed from the first game. They also held United States National Team member Jordan Thompson (averaging six kills per set last year) to only two kills for the set.

“She’s a very successful player for that team,” Gros said about Thompson. “She’s a great hitter with some nice blocks.”

The second set opened with some sloppiness as the teams traded errors up to 4-4. MSU battled up to 10-7, showing its defensive prowess on a long volley that nearly ended in disaster several times before ending with a Lauren Swartz kill. Cincinnati hung around thanks to Maria Mallon, who recorded two kills and an ace, and several unforced errors from MSU.

The Spartans kept a five-point lead around, not letting the Bearcats back into the set until Mallon and Thompson scored back-to-back kills to pull within two at 22-20. Though Cincinnati threatened, Gros’ big block on the match point sealed it for the Spartans, 25-21.

Errors dominated the opening of the third set, with neither team able to gain momentum. Cincinnati put together a 4-0 run to take the lead at 9-8 after Johnson was unable to return a hit. They kept that narrow lead until the Spartans tied at 15, shortly after a long volley ended with a Cincinnati setting error.

The teams traded points until Thompson scored three straight with a kill and two aces to put the lead at 22-20. The Bearcats went on a 3-0 run after that to close the set and take it 25-20.

“We came back into the huddle and said, ‘We need to do things right’, Poljan said. “We could feel it on the court, it was kind of stagnant.”

The Spartans jumped out to an early 4-2 lead in set four, off of improved hitting from Norris and Johnson. They ripped off a 7-0 run on top of it as Cincinnati committed six straight errors. Mallon recorded a kill and ace in quick succession to stop the run, but then Shklyar found Chronowski in the corner for a kill to get the swagger back.

MSU maintained a wide lead for much of the set, but Cincinnati put together a 3-0 run that was stopped by an emphatic strike by Molly Johnson that snuck inside the left boundary. After the Spartans made it 23-15 off a Chronowski kill, the Bearcats scored five in a row to narrow the score to 23-20. MSU scored the last two points off an error and a solo block from Johnson to win the set and the match, 25-20.

“We want to show we were not the team from last year. That team would have given up and lost by two or three points,” Poljan said. “But this year we came out and we crushed them in the fourth.”

The Spartans conclude the Auto Owners Spartan Invitational with a game against No. 21 Tennessee Saturday at 1:30 p.m.