We Watch It For The Music | Euphoria 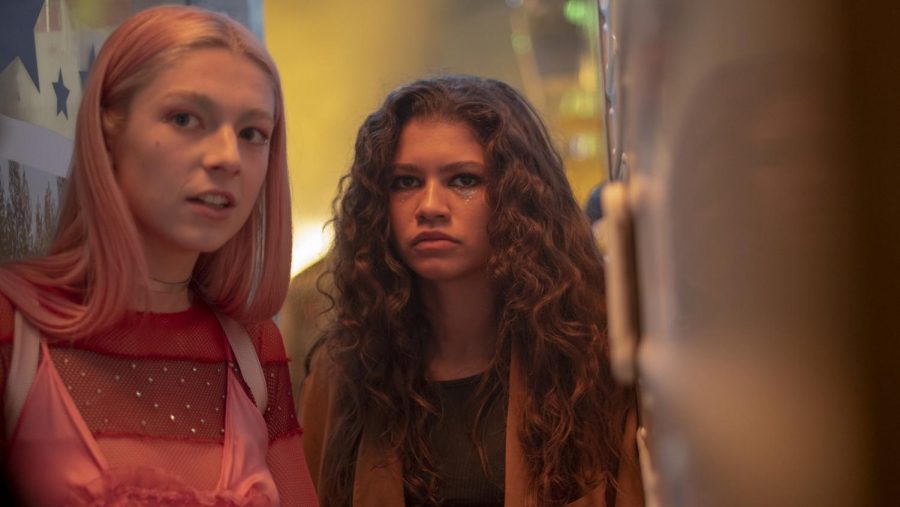 Euphoria is a show I’ve been wanting to talk about since it premiered earlier this summer but I’ve been holding back on in case it turned out to be bad. However, since it has yet to disappoint and the first season just came to a close, I now feel confident in delving into it.

Euphoria is a coming-of-age drama from HBO that is, in one word, raw. The series follows the lives of several high schoolers but primarily focuses on Rue, played by Zendaya, an addict recovering from an overdose. At the start of the show she befriends Jules, the new girl in town, and the two quickly become best friends. The series shoots off in many different directions from there and covers a variety of issues such as sexual identity, body positivity, transphobia and depression. The show is a welcome addition to the world of premiere television drama as it depicts the lives of young people without depicting the  uncomfortable topics as taboo. Euphoria handles social issues with the same rawness as Kids adopted with the AIDS epidemic in the ‘90s or Degrassi handled teen life in the ‘00s, although it doesn’t suck the way Degrassi did – sorry Drake.

The series was adapted from a 2013 Israeli miniseries of the same name by writer-director Sam Levinson. Last year he released his second feature, Assassination Nation, social satire/exploitation film that theorizes what would happen if an entire town’s private information was leaked. As you can imagine, everything goes wrong, and the town quickly descends into violent paranoia. Essentially, if you were to put Heathers, The Purge and Spring Breakers into a blender, Assassination Nation would be the result.

The show carries Levinson’s highly stylized editing and visuals as well as the social commentary that he became known for with Assassination Nation. I was initially wary of writing about Euphoria because I was worried Levinson was recycling his old ideas and messages in an extended format. While the new series does tread on familiar territory it has continued to surprise and impress me throughout the summer months. Levinson has fine tuned his storytelling and message he was trying to touch on in his previous film. The social commentary works a lot better in the context of this series as it feels more natural. While Assassination Nation is without a doubt a blast to watch, the message becomes muddled under the gratuitous violence and gore. Euphoria on the other hand, is a much cleaner work and doesn’t face these shortcomings.

One of the primary reasons the ideas explored in this show land so effectively is the soundtrack that goes along with it. Comprised of an eclectic mix of 2010s music, the soundtrack helps to create an atmosphere that is utterly hypnotic. Before reading any further, please know the following will contain spoilers.

The first episode establishes Euphoria’s visual style in a scene where Rue snorts coke at a party. Through a combination of masterful sound design, manic editing and a knockout performance from Zendaya, the scene takes a radical turn. In the background plays the 2015 party hit “I Know There’s Gonna Be Good Times” by Jamie XX, Young Thug and Popcaan. The track begins as diegetic, muffled through a closed door and people talking. But the moment that Rue takes her first bump, the track becomes clear and loud. Rue quickly begins to fumble for balance, using the walls for support, but then begins to walk on the walls and ceiling. This sequence of Rue getting high serves as crucial foreshadowing for the story that will follow. Levinson uses this scene to illustrate the reality of addiction. There are moments when it feels like bliss, but more often than not, it is turmoil and chaos.

One of the central characters is Rue’s new best friend, Jules, an adventurous trans woman who has just moved to town. She begins an online relationship with a man “Tyler”, whom she has never met in real life, and quickly begins to fall for him. However, things take a dark turn when she finally meets him and finds that he is actually Nate, a violent, transphobic school jock who threatened her the first time he met her. Jules’ excitement quickly turns to a state of disbelief and sadness. The man she thought she was falling in love with is actually set on manipulating her. The scene is accompanied by electronic track “In My Dreams” by ANOHNI. The song, produced by experimental artist Oneohtrix Point Never, is a beautiful parallel to the events playing out on screen. The production is dreamy while the lyrics speak to a greater reality of a destructive relationship, not unlike Nate and Jules’.

During the final scenes of the first season, Bobby Womack’s classic cover of “Fly Me to the Moon” plays over shots of Rue and her family. The scene shows Rue before her overdose, fighting with her mother while her younger sister desperately tries to make them stop. The contrast is clever as the song features Womack confessing his undying love for his partner. Unfortunately, the scene shows that Rue’s her mother has clearly had enough of her behavior and is done being understanding.

Each episode opens with a monologue from Rue explaining the childhood of a specific character, providing context for how they became the person they are at present. The second episode charts the childhood of star quarterback Nate (remember the transphobic Nate I mentioned earlier?). The opening illustrates how the genesis of Nate’s violent and destructive behaviors are from his father. The sequence shows how he imposed a sense of hypermasculinity onto Nate from a young age, as well as his closeted homosexuality which Nate discovered at 11 years old. The exposé is punctuated with the 2000s hip-hop hit “Stuntin Like My Daddy” by Lil Wayne and Birdman. In this context the soundtrack is used for more comedic and ironic purposes. While Weezy spits about how he carries the same sense of flair and braggadocio as Birdman, Nate carries the same hate as his father.

By this point in the article, it’s probably apparent that this is not a happy show and, more often than not, the music works to highlight the mayhem. Here’s a final example of how music supervisor Jen Malone expertly finds tracks to match the pandemonium. The classic ‘70s track “I’m Not in Love” by 10cc found new fame recently when it was featured in the Guardians of the Galaxy soundtrack. While the original is undoubtedly a work of art, this new Kelsey Lu cover gives it a haunting new spirit that could not be more appropriate for Euphoria. The song provides the chilling backdrop for several climaxes towards the end of the season. To name a few, Rue’s drug dealer and close friend Fez feverishly flushing his stash of narcotics while the police raid his apartment, Jules experiencing a drug-induced hallucination during a sexual encounter at a club, and Rue’s manic depression physically disabling her. Kelsey Lu’s layered vocals create a choral effect that, while enchanting, works to illustrate the tumultuous lives of these teens.

If this article hasn’t been a convincing endorsement for this show, hopefully this final push will be. Go watch Euphoria. This whole piece is technically supposed to focus on music, which in itself is a good reason to watch it. The soundtrack is as diverse and eclectic as the range of characters the series profiles, but the show is more than just a soundtrack. The captivating performances from what will no doubt be rising stars, the interesting writing and entrancing visuals are all reasons to check it out. All these elements together make for something special:  a beautiful, honest exploration into the lives of a generation that has yet to be showcased in any real capacity.