WDBM Sports will broadcast 11 MSU games live this season on 88.9 FM in the Lansing area, including the season opener against Tulsa 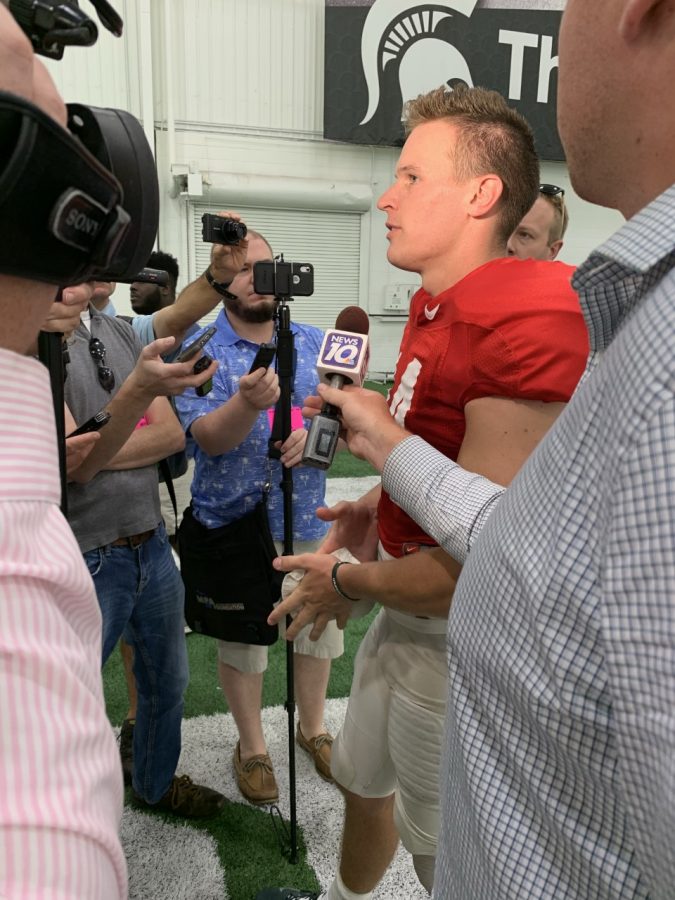 Brian Lewerke addresses the media ahead of the start of school at MSU. (Credit: Eric Bach / WDBM)

EAST LANSING, Mich – We are officially 11 days away from Michigan State opening its 2019 season against Tulsa next Friday, and the questions about this offense and this team as a whole have not gone away.

Michigan State is ranked No. 18 in the preseason AP Poll, joining six other Big Ten teams in the rankings. MSU has four opponents on its schedule ranked in the preseason top 25: Michigan, Ohio State, Wisconsin and Penn State.

Three of those games are on the road, and MSU also visits Northwestern, who received votes in the poll.

Mark Dantonio was not available to reporters today, but a few players gave some insights about camp and especially the second scrimmage, which took place under the lights of Spartan Stadium this past Friday.

According to Brian Lewerke, that scrimmage was once again won by the offense in last-second fashion. Lewerke said that they hit a field goal as time expired to win 49-48 using a modified scoring system.

“We weren’t quite as sharp as an offense this time around, but I still feel good overall about the whole thing,” said Lewerke.

It’s difficult to decide if these so-called victories in scrimmages equal actual progress on the part of the offense, as Defensive Coordinator Mike Tressel said that, “Coach (Dantonio) has a way of making sure (scrimmages) are competitive down to the bitter end, and it usually comes down to whatever happens on that very last series and they got us.”

The bottom line is that until we see this offense in action on Aug. 30 against Tulsa, there really is no telling as to the reality of the offense or how much it has changed.

Outside of Lewerke, Dantonio has been very vague about most every player on the offensive side of the ball, only saying that a handful have looked “good” in scrimmages.

Lewerke did say today that the offensive line is basically the same from a year ago, but that could mean a handful of different variations, given how hard this position group was bitten by the injury bug in 2018.

Cole Chewins and Tyler Higby are expected to start, but both were banged up heading into fall camp and there has been no update on their health.

It can be assumed that no news on the injury front is good news, but Dantonio has always been overly cautious when talking about injuries.

Matt Allen and Kevin Jarvis are shoo-ins for the center and right guard positions, but some combination of Higby, Chewins, Jordan Reid or possibly freshman Devonte Dobbs will be needed to fill out the rest of the line.

Chewins, Jarvis, Higby and Reid all gained over 20 pounds this offseason and all sit at or above 300 pounds on the fall camp roster.

In summary, MSU fans will need to exercise a little more patience when it comes to answers about the offense. They probably won’t come until 7 p.m. next Friday night.

WDBM Sports will broadcast 11 MSU games live this season on 88.9 FM in the Lansing area, including the season opener against Tulsa.