Spartan offense, defense both look to make big plays as camp gets underway 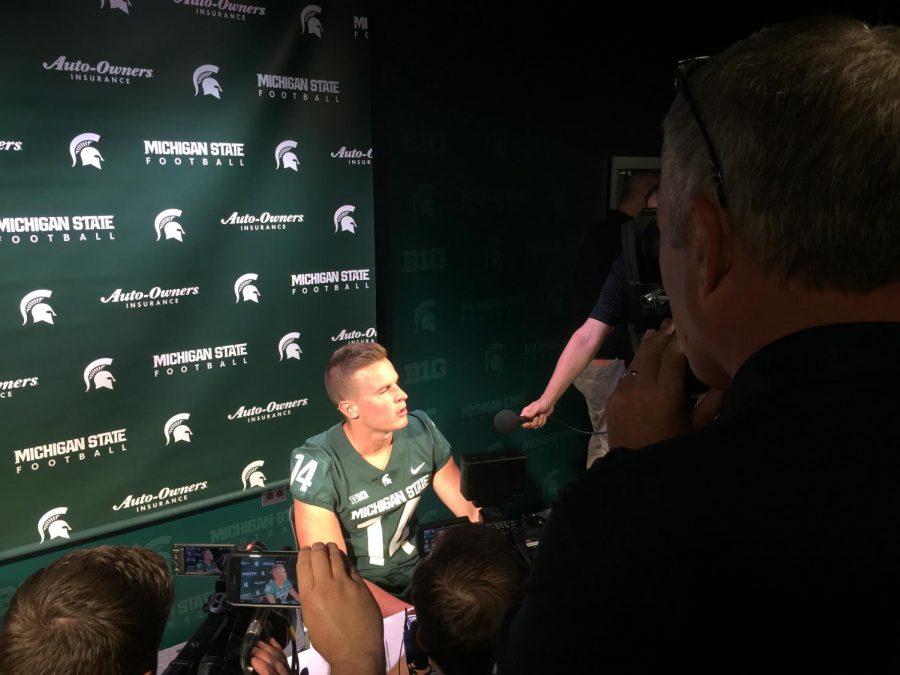 EAST LANSING — Mark Dantonio arrived at the podium in Spartan Stadium on Monday afternoon facing the questions that everyone in the Spartan fanbase wants the answers to: How is the offense coming along?  What are some of the changes that are going to be implemented under new coordinator Brad Salem?

Staying true to form, Dantonio was deflective at best.

“Gotta leave something in the bag.”

Even though he wasn’t willing to divulge many details about the supposed changes that are coming on the offensive side of the ball, the 13-year head coach was in good spirits, joking that the cameras in the room only go off when he lets a rare smile loose from his usually serious expression.

Dantonio was also asked to reflect on his tenure so far, and he asked a room full of reporters how many of them expected him to last this long at Michigan State.

“I don’t think many people, including me, thought we would be around this long. It’s gone by fast, and we’ve had some really great experiences, but we’re ready to make more.”
First day of pads answers a lot of questions
Only so much can be known about a football team before the pads go on, and the Spartans are chomping at the bit to get the pads popping.

Senior linebacker Joe Bachie said that the first day of pads is one he circles on his calendar every year.

For sophomore running back LaDarius Jefferson, the first day of pads is just another opportunity to prove himself.

“It’s just another day for me,” Jefferson said. “Every day I go out there and give it 100% to fight for playing time and fight to make everyone better.  I do look forward to going against Kenny (Willekes), Raequan (Williams) and Joe (Bachie) tomorrow to see how much I’ve improved.”
Defense looks to create more “Game Changing” plays
The 2018 Spartan defense was in the top 10 in the country in most every category except for one important one: turnovers. Last season’s turnover margin was a mere +1, way down from the +14.5 average margin from the 2013-15 seasons, when the Spartans won two Big Ten Championships, the Rose Bowl, the Cotton Bowl and appeared in the College Football playoff.

On paper, the 2018 defense was more dominant than those defenses in nearly every statistical category except for turnovers. That’s something that Dantonio said must improve in 2019 for this unit to take the next step.

“We talk about game-changing plays all the time here,” Dantonio said. “Turnovers are game-changing plays that win football games, and last season, the interceptions were there but I felt like we missed a lot of opportunities to fall on the ball sometimes.”

“Every single day you don’t have an interception, you have to put a nickel in this piggy bank that we have,” Scott said. “At the end of the season, the guy with the most picks takes home all the money.  I think it’s a good way to put a premium on turnovers.”

Senior safety David Dowell said that the piggy bank competition was DB coach Paul Haynes’ idea, and also said that creating turnovers has been a focus for him heading into this season.

“We’ve really been focusing on not just playing the call, but making sure we understand what the other team is doing, down and distance and other things like that,” Dowell said. “At the end of the day, we’re usually going to be in the right spot, so we just need to execute and finish that last 10% of the play.”

Dowell’s final season in the green and white is also a unique one for him, as it will be his first without his twin brother Andrew by his side. David redshirted their first season and Andrew played right away, so Andrew’s eligibility was up after last season. Dowell said that it has been an adjustment, but he’s taking it in stride.

“It hasn’t really changed my mindset personally, but I can’t just defer to him for stuff anymore. I think it’s helped me step up as far as being more vocal as a leader, even just looking out for my little brother Michael.  But it’s definitely made me more independent.”

Dowell and Bachie are both heading into their senior years, and a common theme throughout Dantonio’s tenure has been to push guys to have their best seasons as seniors. It’s something that this group takes just as seriously as those before them.

“Coach D is always saying how important it is for us to have our best year as a senior not only on the field, but from a leadership standpoint,” Dowell said. “I’m just trying to set the best example possible.”

“Defensively speaking, we’ve had good years in the past, but this year’s gotta be better,” Bachie said. “If it’s not, then we’re under-achieving and that’s bad for the team. The offense is going to have their best year, Brian (Lewerke) is going to have his best year, and hopefully it takes us to a Big Ten Championship and winning the East.”