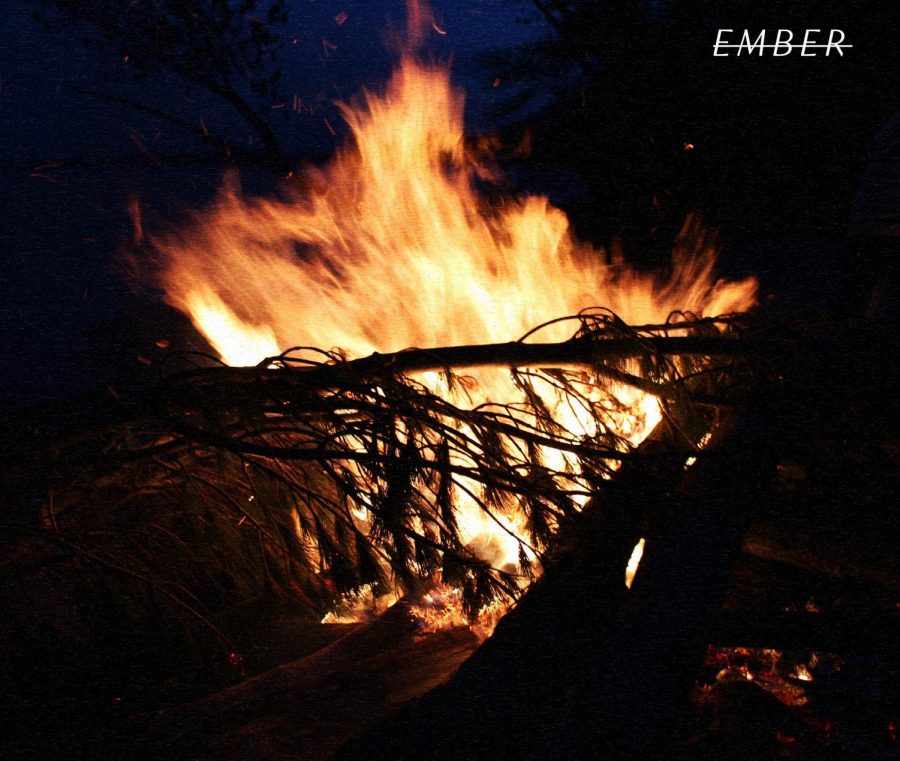 Why local? Why indie?

Every artist starts at this level when it comes to music, so why not support it? It’s also kinda our thing at Impact 89FM.

Working at WDBM has allowed for a multitude of opportunities to meet, collaborate and build relationships with a variety of artists. From the biggest headliners to the coolest local sounds, you never know what new groups you can meet – which led us to attend Ember Fest in its second year.

The venue reflects this sentiment, being hosted in a pair of fields near Hudsonville’s 8th Avenue. The stage, constructed by Emaus and the other musicians, is adorned with cafe-style LED lights and a fire backdrop, as well as a bevy of speakers. Trees surround the stage, which are later used as props in certain acts – namely when Anonymous Phone Call and Pretoria bandmate (and Impact volunteer!) Matt Burdick proceeded to climb the tree in the middle of a song.

Immediately below the stage, stood a pit of groupies and enthusiastic dancers. Behind them were sporadic lawn chairs, swings and a fireplace – adorned with a variety of neighbors, fans, family members and even some dogs. (Yes, the dogs were indeed good dogs.) The pit, which alternated between frantic dancing, moshing and funky shuffling, were wildly supportive and enthusiastic for every band that took the stage.

Besides the music, there was also set-ups for volleyball, spikeball, cornhole, and a rope swing – as well as a bonfire to end the festivities. What’s more: a dinner of hot-dogs, chips and a slushie machine were provided on top of the entrance fee.

The festival was unlike any we had ever been to. Emaus did a fantastic job organizing it all – especially since Ember Fest was only in its second year.

It was a perfect summer night.

Despite the variety of local musicians on the bill, Emaus and his friends were the main draw of the festival – Emaus himself being the lead guitarist for APC and bandleader for Kodiak Signs. Though a majority of the acts came from the surrounding Grand Rapids area, there was certainly a wide variety of beats and tunes heard throughout the day. Here’s a breakdown of the groups and artists to look out for:

Maddie Miner kicked off Ember Fest with her solo acoustic act. She delivered some beautiful, pensive and thoughtful grooves and croons with her original tunes. (And yes, George was really proud of that alliteration he wrote on accident).

The duo of Manic Hick (Micah and Nick) drove Ember Fest to its prime energy with their aggressive rock beats. It was so cool to listen to them – they had hybrids of samba, metal, jazz and polka in their set. For a set of only a guitarist and drummer, there was tons of versatility packed in! Additionally, their presentation was markedly different than the acts to follow; they were completely immersed in the jams of one another. It was as if they were on a completely different dimension.

Short Panic is a funk rock band which integrates some jazz rhythms into their music. They weren’t originally planning on being a funk band, however – not until they realized their drummer, Kyle Kuhn, was the “funkiest person alive” according to his bandmates. Bass guitarist Mitchell Evink and lead singer/guitarist David R. Ophoff Jr. compliment Kuhn’s energetic beats with an alternation of harmonious and dichotomous sounds. Super cool. Their brand-new EP captures their nostalgic funks perfectly.

Kodiak Signs is a newer project frontlined by the Emaus siblings, Kuhn from Short Panic on the drums, Burdick and Ben Dewitt from Anonymous Phone Call, and Pretoria on bass and guitar, respectively. Their set was a joy to watch, and featured a constant rotation of guest artists; notably, Chaseton from Anonymous Phone Call led the falsetto screech of Led Zeppelin’s “Immigrant Song.” They made it very clear their setlist was kind of improvised. Immigrant Song lasted a little longer than normal, because they admitted they forgot how it ended. You just can’t beat a live performance.

Troublesome, according to their Facebook page, describes themselves as “five dudes who make music to stave off a witch’s curse.”. Why haven’t they received national attention for this fact alone? I mean, their music is great, and they were even better at their second year at Ember Fest, but shouldn’t we be doing something about this on a national level? I mean, they’re literally haunted by a witch. How can we as a society just ignore this? #SaveTroublesome

Future Misters is a four-piece punk rock band that has some blues melodies mixed in. Starting from playing jams in a house at Grand Valley, Future Misters bonded over more than just music – they were all student athletes at Grand Valley State University. They brought the same rigor of their athletic careers to their lively set.

The first crowd surfing at Ember Fest was because of Rendered Worthless’ lead vocalist and guitarist jumping onto the crowd! RW brought more of an alt metal rock sound to the fire, and the crowd welcomed it with open arms. Headbanging and dancing were married together harmoniously. Another awesome set.

Pretoria is an indie/alternative rock band from Grandville that specializes in beach tunes. (Insert obligatory “golly-ain’t-Michigan-weather-terrible?” phrase here.) There was a charming juxtaposition between the intros to the songs and the music itself. Bassist and lead singer Robby Gullett dedicated their somber punk hit “Laundry” to dirty socks (and an ex girlfriend of a band member) and bedroom punk-inspired “Lafayette Ave.” to hating community college. Speaking of Gullett, it should be noted that he was probably the best dancer in the crowd when Pretoria wasn’t killing it on stage. Seriously.

Recognizable by their pre-song jokes, commentary and self-deprecating merchandise (“Anonymous Phone Call is my third favorite band” being one of their latest zingers), Anonymous Phone Call is no stranger to Impact.  APC brought their signature alternative energy and fun to another winning performance, delivering good vibes from the mosh pit to a pastoral crowd sit-down. Their newest music video, “One More Mistake”, is now live!

Ember Fest’s headliner, the grunge rockin’ Parking Lots, had a mannequin on stage and had fans join them on stage to crowd surf. It was performance art athletics, and their adrenaline-pumping numbers on stage as well as in the crowd were the perfect cap to the perfect summer night.

And what festival would be complete without a playlist to remember it by?

Needless to say, Ember Fest’s second year was a complete success. We can’t wait to see how it continues to grow in the future.

For more music like what you heard at Ember Fest, check out Impact’s The Basement – a speciality show focused on the sounds of Michigan – Thursdays at 8 p.m., only on WDBM.

Check out the photos from the event (thanks to photographer, Alain Rodriguez).