Miya Folick Interview: Music, Current Events, and Anything But Basketball 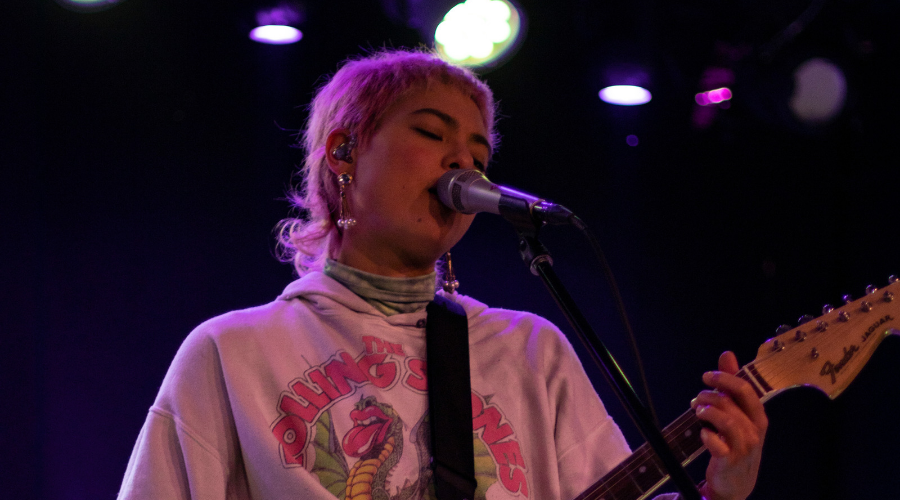 The importance of Miya Folick’s music in the modern age cannot be overstated. From her live band’s formation through Tinder to her courage in tackling important song topics like sexual assault and abusive power structures, everything about Folick is impressively current, relevant, and a breath of fresh air in the world of indie music. After building up a discography of folk and rock inspired EPs, Folick released her danceable debut album Premonitions in October 2018 to widespread acclaim. Impact had the opportunity to meet with Folick at Detroit’s El Club and talk to the singer about her new album, her goals and influences and her dislike of basketball.

Matt Burdick with Impact 89FM: What is the worst pronunciation of your name that you’ve ever heard?

Miya Folick: Great first question. I guess you can’t get that creative with the mispronunciation of my name. What are the options? “Mee-yah,” “My-ah,” “May-ah?” but nobody says that, that’d be insane!

Miya: [Laughing] No. People call me “My-ah Fall-lick” all the time. “Frolick.” Actually, in my building where I live if you scroll through the list of residents my name is listed under “Frolick.” In my own building. I just never bothered changing it. It’s not the way they mispronounce it, the worst is just how long I’ve let people mispronounce my name which is pretty long.

When I was in eighth grade, I had a teacher and her name was Mrs. Seben, which is a whole other thing, and she mispronounced my name the entire year until this girl, Jackie, on the last day of school was like “her name’s Miya.” I was so embarrassed just because I had let her mispronounce my name for the entire year.

Matt: You first started your band through Tinder, is that right?

Folick: I mean, yeah my live band. I started my project and it’s still a solo project. I started it in my bedroom, as most solo projects go. But, when I started playing live, I wasn’t really in the music scene in L.A. and I realized there’s a lot of musicians on Tinder. I put up a profile that said “I’m Miya. I’m a musician. Here’s my Instagram, look it up or whatever. Let me know, I’m looking for a band.” But, yeah, it worked out.

Matt: Premonitions is your debut album. Did you feel a lot of pressure to come right out of the gates with a big artistic statement that was as perfect as possible?

Folick: Yes. I didn’t feel a lot of outside pressure but that’s what I wanted to do.

Matt: I love the album cover for Premonitions, can you talk about what drew you to that specific picture?

Folick: I wanted something that communicated a few specific things and those were: community, a sense of nostalgia mixed with a sense of futurism, and the storyline. I worked with the creative director Molly Hopkins and we came up with the idea together. Just thinking — okay, I have this idea of this look in my eyes that you can’t really read… like seeing the future but something that connected to the past and my parents. My mom is Japanese and my dad is Caucasian so there’s this mixture of cultures and it’s shot on film so it feels really old. But it also feels new because of the framing. You can’t quite put your finger on what the picture is. 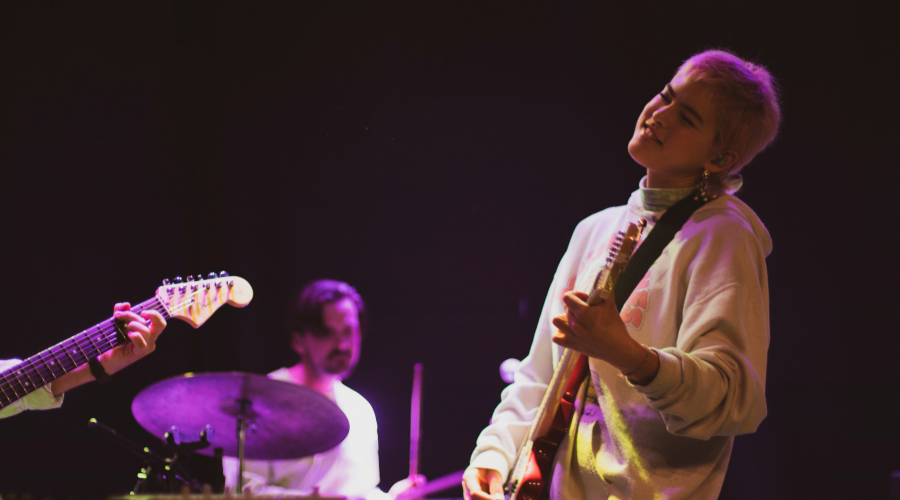 Matt: Your first couple EPs were really guitar-driven and folky-rocky, but this new album has a lot of synth-heavy stuff, more dance-y and electronic. What inspired this change in styles?

Folick: I’ve always liked music like that and I think I always new my first album was going to be like that. I think it was only a surprise to the listener and not me.

Matt: What song from the new album is your favorite to perform live?

Folick: It changes every show, but “Dead Bodies” kind of bangs every time.

Matt: Speaking of “Dead Bodies,” a lot of songs on this record touch on really heavy current issues. Do you intentionally set out to write about these kinds of things or does it just come naturally once you start writing?

Matt: A lot of the songs off Premonitions are very danceable and just make you want to move your feet. Do you think about how live audiences are going to react to the songs when you’re writing them?

Folick: Yeah. I was hoping people would be able to dance to this album so I’m glad you say that. I do think about the audience. I think about what experience I want to provide and what show I want to be a part of when I’m playing live. It’s kind of about what experience I want for the office and then kind of selfishly ‘If I’m going to this every day then what kind of music do I want to play?’ and I want to play music that makes you move. 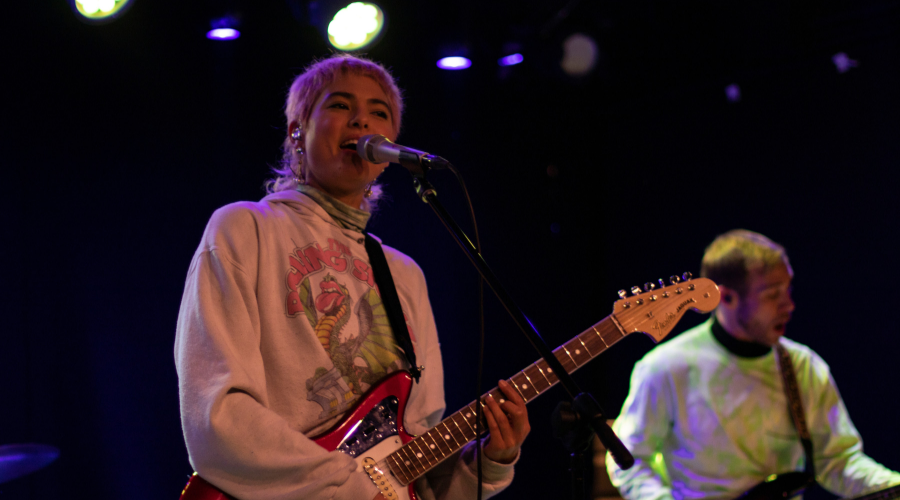 Matt: In your Facebook bio is says that you played basketball for nine years and hated every second of it. I thought that was a really funny detail to include can you elaborate on that a little bit?

Folick: Well, I grew up in a family [where] we all just played basketball. It’s very popular to play basketball for kids in the Japanese American community where I grew up. So when I was 7 or 8 I was just put into basketball and my best friend played and her dad coached our team. That’s probably a hyperbole to say that I hated every second of it, I didn’t — I did like it at some points. But, I will say there were many seasons where my parents asked me if I wanted to play basketball again this year and I said “No,” and then they signed me up anyway. I never fully liked it, but I think I exaggerated my distaste for it for humor on my bio.

Matt: Very understandable. Before you were a musician you wanted to be an actress. Do you think your background in theater influences your performance and your songwriting?

Folick: Oh yeah, definitely. I mean… I feel the same kind of push-and-pull here that’s exciting in acting where you have an intention and you’re trying to express something but then you also have to react to what people are giving you and the energy that people are giving you. I think it’s really cool to see performers who are just like “fuck whatever energy you’re giving me, I’m just gonna give you this energy.” I think that’s amazing [but] it’s not the kind of performer I am. It’s more of like a massaging of energy where I’m like “Oh okay, okay, let’s try to move it here or let’s try to move it here.” I find it really hard to bring very intense energy to an audience that’s a little bit low energy. So, I try to, slowly through interactions, try to bring the energy up and that feels like a form of of listening which is a form of acting. I learned a lot about that when I studied acting. So, yeah, it’s definitely present. 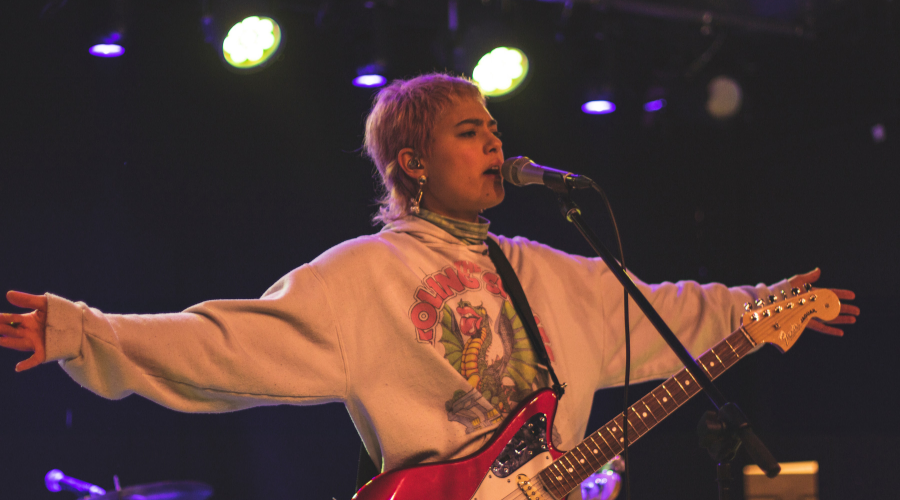 Folick: I felt nothing. I didn’t care. A lot of my friends messaged me like “Oh my god, Ariana Grande stole your song,” but no she didn’t, her song is totally different. I didn’t come up with that phrase. I didn’t steal it from anywhere, but I know I’m not the first person who’s ever said “God is a woman.” I don’t even really believe that god is a woman, that’s the other thing that people say, like “why are you gendering god?” That’s not really the point. The point is that we hear of god as a man so often in culture that I’m just trying to even it out. It’s like, I’m just going to say god is a woman as many times until it’s even. So if Ariana’s shouting it from up high and I’m shouting it from my little mole hill, then that’s great. That’s what I wanted when I made the song. So, I don’t care. I don’t own that phrase.

Matt: One last question, do you remember the first song you ever learned how to play on guitar?

Oh, oh, oh… Okay. This is going to kill me. It’s a very common song to learn on guitar, it’s about a house… Oh! “House of the Rising Sun!” Wow, okay there we go.

You can listen to “Premonitions” on any streaming service, and check out the music video for the lead single “Stop Talking” here.