After a 5-3 win in the first game, MSU couldn't repeat the magic against the high-powered Hoosiers 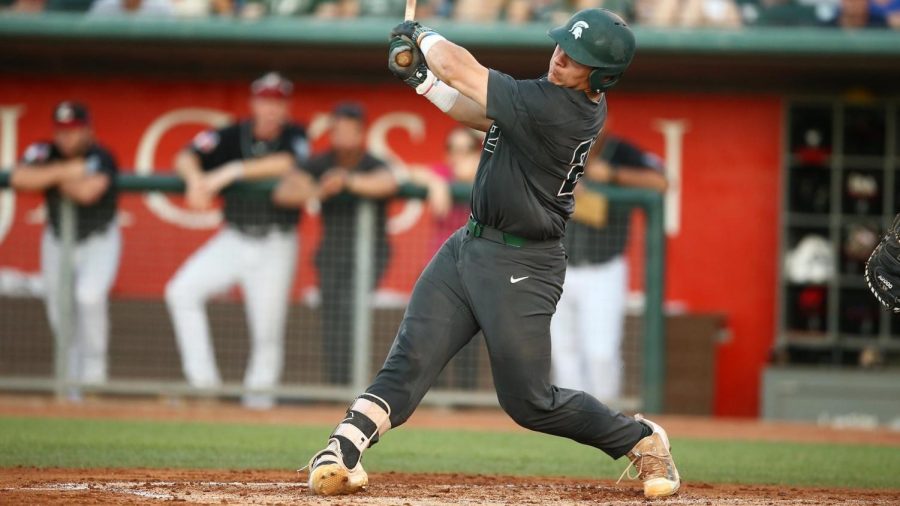 EAST LANSING, Mich. – Poor weather conditions this weekend forced a doubleheader to take place Sunday afternoon at McLane Stadium. The Spartans rode some late-inning offensive heroics as well as a solid start from Mitchell Tyranski to a victory against Indiana in game one.

The rubber match of the series would be the defining moment of the weekend for the Spartans, as they looked to bounce back from a disappointing road trip to Piscataway during the previous weekend.

A double from leadoff man Drew Ashley was followed up a home run by center fielder Matt Gorski. Caleb Sleeman, the starter of the second game, really struggled with his control early.

Even though he only issued two walks through his four full innings, he was constantly working from behind in the count. That said, he was able to settle down after he was tagged early, as the score of 2-0 held until the fourth inning when a single and a walk put some Hoosier runners in scoring position. A double would then stretch the lead to 4-0 in favor of the away team.

Evan Flohr relieved Sleeman following the conclusion of the fourth inning and pitched well with the exception of a solo home run by Indiana shortstop Justin Walker. Outside of a solo shot from Adam Proctor in the sixth inning, the Spartan bats were deafeningly silent, only able to rack up a total of two hits over the nine innings of play.

The game was within reach for Michigan State until the eighth inning when some sloppy defense combined with a few Indiana base hits allowed for the Hoosiers to almost double their run total, extending the lead to 9-1. A rough outing from Indiana reliever Grant Sloan allowed the Spartans to load the bases and score a run solely on base on balls.

The Hoosiers decided they weren’t done however, as catcher Wyatt Cross crushed another two-run shot over the right field fence, pushing the lead to the eventual final score of 11-2. One more notable performance of this game was the debut of reliever Danny Gieselman for the Spartans, a former pitcher for the Michigan State club team. Gieselman was utilized in a mop-up role in the ninth inning, as he recorded the final two outs of the inning.

This game was, in part, a microcosm of the entire season for the Spartans so far. Following an emotional high with a win earlier in the day, the Spartans fell flat, failing to replicate any of the positives they had. This has a lot to do because of the inconsistency from the upperclassmen.

As an example, the third hitter in the Spartans lineup, senior shortstop Marty Bechina, took an 0-for-3 with three strikeouts. As young as this Michigan State squad is, these kinds of performances from the leaders of this team are absolute momentum killers. The tone setters did just that, they set a very low bar.

Michigan State will look to try to salvage the week with games against Oakland University and the University of Toledo on Tuesday and Wednesday of this upcoming week.