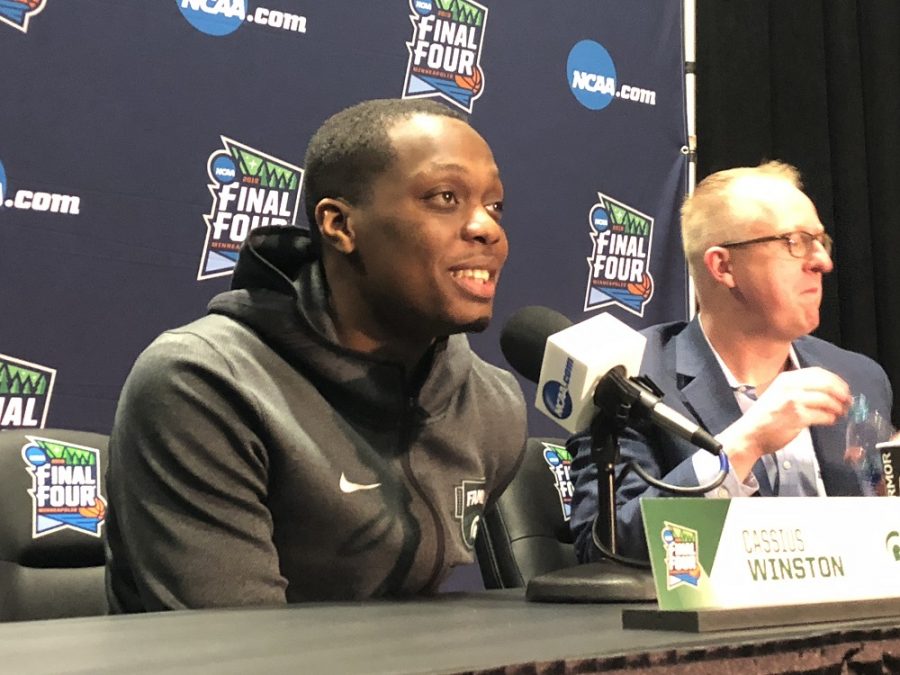 MINNEAPOLIS, Minn. — On the eve of Michigan State’s Final Four game against Texas Tech, the mood around the Spartan locker room is almost serene.

Just over a day away from the biggest game of their lives, mind you.

“You’d think that after the Duke game, we’d be relaxed and content with our season,” Xavier Tillman said at Friday’s open practice. “But we’ve still got two games to lock in on and focus for 40 minutes to come out on top.”

MSU heads into tomorrow’s matchup with Big 12 co-champion Texas Tech slightly favored to win and play for a national title, but the Red Raiders looked impressive last weekend in Anaheim, Calif. in beating Michigan and Gonzaga.

Spartan head coach Tom Izzo is back at his eighth Final Four, while the three other coaches – Auburn’s Bruce Pearl, Virginia’s Tony Bennett and Tech’s Chris Beard – are making their first appearances. If experience will prove to be a strength, Izzo isn’t letting that on.

Izzo continued: “Experience helps, but at this stage, the experiences that all those other coaches figured out how to win four games in a row under some incredible pressure, so they’ve done it before, and they’ve already shown their colors.”

Julian Mitchell’s preview of the Red Raiders details just how solid Tech is defensively. Beard’s team is on track to have Ken Pomeroy’s best defense since he started tracking data in 2002. Teams shoot just 42 percent on 2-pointers against Tech, right with MSU’s 41.8 percent as two of the best defenses in the country. Their plan to keep teams out of the middle has stifled nearly every team Tech’s played this season, and their aggressive defense has limited opposing offenses behind the arc as well.

They also hold the nation’s ninth-best 3-point defense as well, holding teams to just 29.3 percent from outside. With so much of this game in Cassius Winston’s hands, the junior is staying calm and collected.

“It takes an adjustment,” Winston said. “Games are going to be played different ways. The defense you don’t know until you go out there. You’ve got to feel it out.”

Henry ready for the big stage

With Kenny Goins the only player on the MSU roster with Final Four experience in 2015, the rest of the Spartans’ rotation will have to adapt quickly in a high-pressure environment. A pair of freshmen have a real chance at seeing time tomorrow, as starter Aaron Henry and winger Gabe Brown played a total of 95 minutes in two games last weekend during the regional games, both scoring season-high point totals in the Sweet 16 against LSU.

Henry’s role as an x-factor in the MSU starting five will be on display tomorrow night.

With Henry likely matching up with star forward Jarrett Culver, the freshman will be needed badly on both ends against Texas Tech.

“A lot of their defense turns to offense,” Henry said. “Obviously defense is huge for us, but making sure we are rebounding as well.”