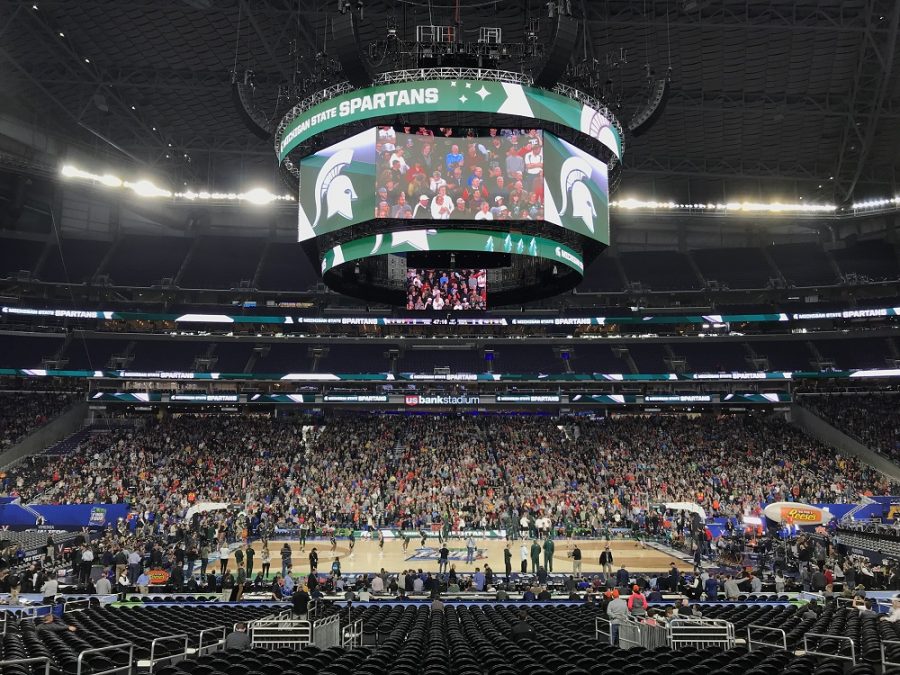 MINNEAPOLIS, Minn. — The Road Ends Here. That’s the phrase that is plastered across all of downtown Minneapolis right now as the city welcomes the final four teams in the NCAA tournament to U.S. Bank Stadium this weekend.

On Saturday in front of what should be a packed house, that statement will ring true as Michigan State and Texas Tech go to battle for a chance at a national championship.

It looks like it will be a bloodfest as these two tough, defensive-oriented teams go head to head. The matchup pits Spartan head coach Tom Izzo up against Texas Tech coach Chris Beard, who has called Izzo his idol and even patterns his program off the Spartan toughness.

In the past two seasons with Beard at the helm, the Red Raiders have prided themselves on being tough and forcing teams to earn every basket that they get.

Tech plays a different brand of defense than any team in the country by aggressively forcing the ballhandler to the baseline and away from the painted area. It’s a defensive mindset that has earned them the No. 1 ranking in adjusted defensive efficiency according to KenPom at 84.0 and allowed them to hold their last opponent, Michigan to 44 points.

“They keep the ball out the middle really well, they force you baseline and when you drive baseline it looks like you’re wide open because that’s just the way they’re forcing you like their man’s not really guarding you,” sophomore forward Xavier Tillman said. “But they take a charge, their bigs are known to take charges just as well as their guards so you would think you go in and make a move on the big, but as soon as you make contact they’re falling on the ground and they’re going the other way. So they’re just a really smart team, very strategic team and very disciplined as well.”

The Red Raiders pride themselves on their defense, but the offense is no slouch either with sophomore guard Jarrett Culver leading the way. Culver is one of the best players in the country, with averages of 18.9 points and 6.4 rebounds per game. His play has earned him Big 12 player of the year honors and NBC Sports predicts him to be the fifth overall pick in the upcoming NBA Draft should he declare for it. The Spartans will likely look to match freshman wing Aaron Henry up with Culver as Henry has been one of the better perimeter defenders on the team.

“Driving ability, either way, he’s very effective driving the ball and it’s not like he can’t shoot so it’s not going to be short closeouts, but just staying disciplined and staying down on shot fakes and just playing defense,” freshman Aaron Henry said. “You don’t want to over dig anything knowing he’s a good player he can do almost anything so you got to play him straight up.”

To complement Culver are two of the best long-range assassins in the country in sophomore Davide Moretti and senior Matt Mooney who shoot the long ball at 46 and 38 percent respectively.

The Spartans come into Minneapolis with plenty of momentum, coming off the heels of defeating the most talented team in the country and tournament favorite Duke in the Elite Eight.

Like every Izzo team before them, this team brings grit and toughness to every game that allows them to stifle even the toughest offenses and dominate the glass. Through 36 games this season Michigan State has a rebounding margin of plus-9.5.

Against a Texas Tech team that doesn’t rebound the ball that well, averaging only 34.2 rebounds per game and holding a plus-1.7 rebounding margin, the battle on the glass will be key.

Along with the rebounding battle, the Red Raiders will have to find a way to stop Big Ten player of the year and recently named AP First-Team All-American Cassius Winston.

Winston has been spectacular all season for the Spartans and has continued that play in the NCAA tournament.

Texas Tech will hope their no middle defense can stifle the junior guard, but as others in the tournament have found that’s easier said than done.  Against two of the better defensive guards in the country in Tremont Waters of LSU and Tre Jones of Duke, Winston looked unbothered as he put up 17 and 20 points respectively to go along with 8 and 10 assists.

Michigan State is rolling right now, but Texas Tech might just be the team to put a stop to their run. This marks Izzo’s eighth trip to the Final Four and with no other blue-blood in his way, he’s hoping to finally capture his second national title.

The Red Raiders are hoping to play spoiler and make history for their program. It’s their first-ever Final Four and they are hoping to make their stay a long one.

It’s exactly what all the advertisements say, The Road Ends Here, and for one of these teams, it will Saturday. MSU and Izzo are hoping they just get another day or two of work.

Tip-off is scheduled for approximately 8:49 p.m. ET and will be televised nationally on CBS. You can listen live to Impact 88.9 FM in the Lansing area.