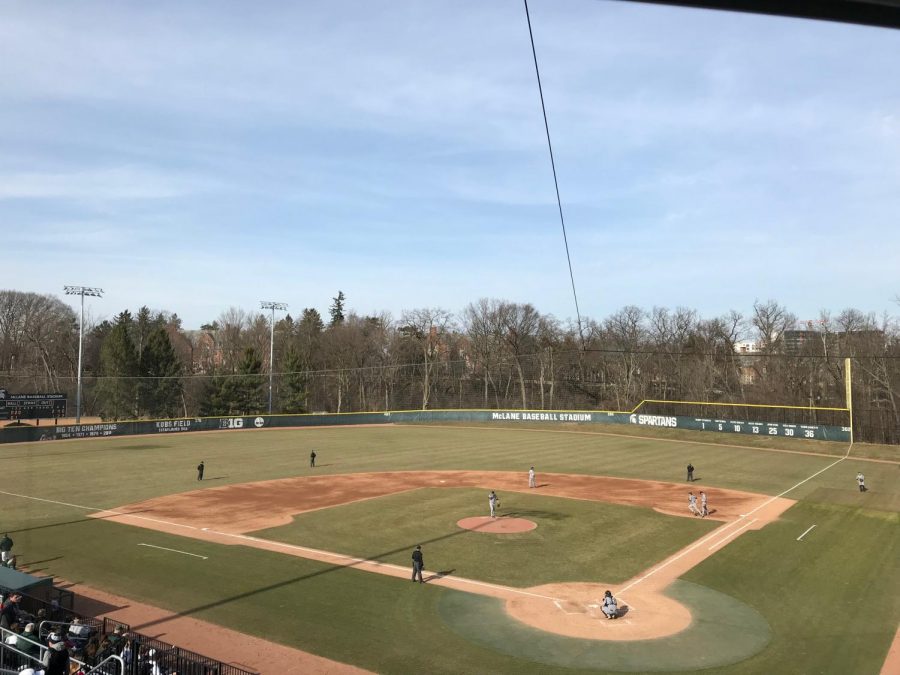 EAST LANSING, Mich. — Michigan State concluded its five-game stretch against in-state competition Wednesday against Central Michigan, falling to the Chippewas 8-6. After both offenses exploded for 11 runs combined in the first three innings, it was the bullpens that stole the show the rest of the way.

Sophomore Jesse Heikkinen started on the mound for the Spartans, his fourth start of the season. He came in with a 0-1 record and a 5.93 ERA with just over 13 innings pitched so far this season.

Heikkinen struggled early against the dangerous Chippewa lineup, walking the first batter he faced and giving up an RBI double to Zavier Warren on the very next pitch. Zach Gilles then laid down a perfect bunt for a single and advanced Warren to third. Warren then scored on a groundout by first baseman Griffin Lockwood-Powell, putting CMU up 2-0 after the first inning.

Heikkinen, following two strikeouts and a walk, looked on pace to get out of the second unscathed. With a runner on and CMU leadoff hitter Zach Heeke at the plate, Heikkinen got the ground ball he needed to end the inning.

Unfortunately for the Spartans, the ball was bobbled by first baseman Joe Stewart and Heeke was able to reach base safely.

In the next at-bat, Warren tagged a 2-0 fastball over the left-field fence, extending the lead to 5-0. A Powell-Lockwood ground ball eventually ended the inning. Michigan State head coach Jake Boss Jr. acknowledged the impact the error had on the game.

“We make one mistake on a fundamental, the next pitch gets hit for a three-run home run and we get beat by two. I’m not a math guy but that seems to me if we make the one play, we probably win by a run.”

Michigan State answered in a big way in the latter half of the second inning, all starting with a one-out hit by catcher Adam Proctor. The unlikely single was hit straight up in the air, but the third baseman was unable to get there in time and the ball landed right in front of the pitchers’ mound. That was all the Spartans needed to spark a rally and get the bats going.

Zaid Walker followed the Proctor single with a double to left and Joe Stewart drove in the first run with a sacrifice fly to center field, scoring Proctor. Zach Iverson kept the inning going by smashing a triple off the 385 sign in right-center field, scoring Walker. Now back at the top of the order, star Bryce Kelley drew a walk and then stole his tenth bag of the year.

With two runners in scoring position, freshman Reese Trahey delivered with a two-strike single to left, scoring both Iverson and Kelley and bringing Michigan State to within one. After a wild pitch advanced Trahey to second, Senior Marty Bechina tied the game with a single to left field. That was all Michigan State needed to chase CMU starter Ian Leatherman out of the game. He was replaced by Grant Frazier who got Dan Chmielewski to fly out to center to end the inning.

Heikkinen came out for the top of the third hoping to keep the momentum on the Michigan State side. However, Sullivan came up with one out and drove the ball deep to right, riding the wind just over the right-field fence for a solo home run. Central Michigan followed the homer with two singles forcing Michigan State to pull Heikkinen and bring in freshman Colten Panaranto out of the pen. The freshman got his team out of the jam and kept the Central Michigan lead at one.

The quick response by Central Michigan to the Michigan State rally was a huge turning point in the game, as Michigan State was never able to grasp that momentum back, which Boss noted.

“We got a little bit of momentum there and then we seem to give up some runs which loses momentum.”

Despite the hot start from both offenses, both bullpens kept the game at 6-5 until the top of the sixth. The Chippewas were able to load the bases on senior Evan Flohr with two outs, and Crum capitalized with a hard single up the middle scoring Warren and Blake Cleveland to extend CMU’s lead to 8-5.

The Spartan bats went quiet against the CMU bullpen the rest of the way, never scoring again until the bottom of the ninth when an error by the CMU right fielder allowed Walker to score from first base on a routine single by Iverson. Antoncic pinch hit for Brendan Regan with two outs and two runners on but flew out to right to end the game.

The loss moves MSU to 5-21 on the season and CMU to 21-7. Michigan State will return to the field this Friday against Indiana State (21-4) at 6:35 for the first-ever night game at McLane Stadium, and the first of a three-game series against the Sycamores.

Boss knows Michigan State will face a challenge this weekend and acknowledged that his team has improvements to make before the weekend series. When asked where his team needs to improve the most, he responded simply.

“All phases, we’re 5-21, we’re not very good at anything right now. Indiana State comes in, they are very good, we need to play better fundamental baseball.”