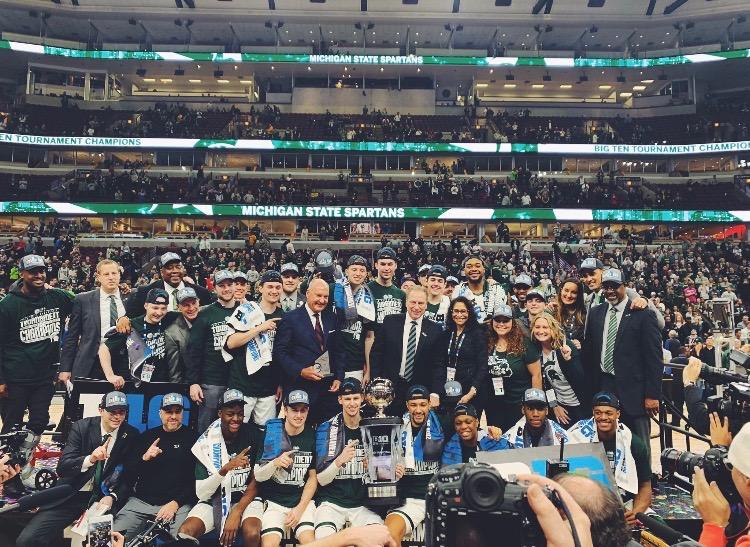 “This one beats last Sunday for me personally, because we lost last year,” Xavier Tillman said. “This was one of my goals coming into this year to win in this tournament.”

The championship blew open with a 3-pointer from Ignas Brazdeikis. Scoring Michigan’s first nine points, Brazdeikis fed off the energy from the arena.

Both teams struggled to score in the beginning of the half. Michigan State shot 32 percent in the first half, going 9-for-28.

“[Ahrens] was screaming,” Tom Izzo said. “He thought it was broken. He thought his career was over. It was one of those times that you won’t forget.”

The momentum changed on the court after an 10-0 scoring run from Michigan put them up 21-17. Michigan State struggled defensively to stop the Wolverine shooters.

“[Izzo] challenged people,” Izzo said. “We didn’t stick to the game plan. We didn’t do the things that a championship team does. He challenged us to be better in the second half.”

The first half ended with another 3-point shot from Brazdeikis, giving Michigan the advantage 31-23. Brazdeikis was hot throughout the game, ending the afternoon with 19 points, going 4-for-8 from deep.

McQuaid became the go-to guy in the second half, lighting up the floor going 7-for-13 from beyond the arc. Demolishing his career high of four made 3-point shots, he ended the day with 27 points, a new career-high.

“I didn’t want to go out like punks,” McQuaid said. “I wanted to keep fighting and keep going like ‘Spartans Will’ and we did that.”

After a fast-break ending with an and-one from Cassius Winston, the gap closed and the Spartans trailed 44-41 with 12:35 left in the game. Proving his Big Ten Player of the Year title, Winston made some game-changing plays, weaving through a tough Wolverine defense.

“A lot of people didn’t think we’d make it through these three games,” Winston said. “A lot of people said we couldn’t beat them three times, so just to keep proving people wrong and keep getting better as we go.”

Winston finished out the championship with 14 points, 11 in the second half.

Although Winston and McQuaid turned up the heat offensively, the lack of defensive stops on the other end of the court allowed Michigan to keep the lead 52-50 with five minutes left on the clock.

Xavier Tillman turned the game around with an aggressive rebound and putback, tying the game at 60 with 1:10 to go. Tillman led the boards with 11 rebounds. The Spartans picked up 11 offensive rebounds for the game.

A Cassius Winston layup gave MSU a 62-60 lead before Kenny Goins sealed the game with two made foul shots. The Spartans won the Big Ten championship 65-60.

Michigan State has now earned a No. 2 seed for the NCAA tournament. The Spartans will play in the East Region and head to Des Moines, Iowa to face No. 15 seed Bradley.