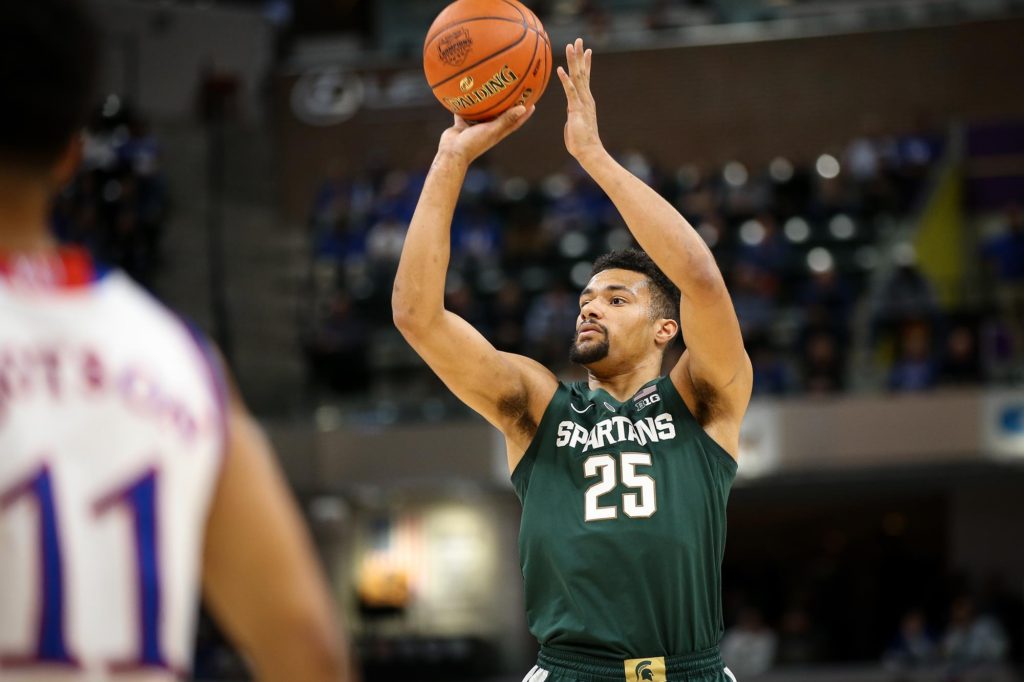 CHICAGO — Michigan State pushed past Wisconsin 67-55 to move on and compete in the Big Ten Championship. The Spartans’ uncommonly productive first half put them right where they needed to be to succeed against the Badgers.

Unlike past games in their season this year, the Spartans came out strong in the first half. Normally sluggish and sloppy to begin games, Michigan State was hot off the get-go.

The Spartans went on an eight-point scoring run right out of the gates. Veterans Kenny Goins and Matt McQuaid collected the first points of the game with open looks from deep. Wisconsin lacked the offensive energy that MSU had.

“Kenny’s probably been the guy that’s changed our team throughout the last two and a half months,” Michigan State coach Tom Izzo said. “He is one of our best defenders. He is our best rebounder. He is one of our best conditioned guys and he has really figured out how to shoot the ball.”

Shooting just 39 percent for the game, the Badgers couldn’t get a single shot to fall from outside the paint until Kobe King hit a corner 3-pointer with 4:20 left in the first half.

The Spartans continued to put up points on their end, going 7-for-12 behind the arc at halftime. Cassius Winston ended the half leading the Spartans with 11 points. Goins finished the half with nine points, going 3-for-4 from 3-point land.

“It means the world,” Winston said. “It’s always something that we can’t do or something that’s going to hold us back, but we are going to keep pushing and keep proving people wrong. We hope to make that statement tomorrow.”

After a missed layup and travel from Winston, the Spartans were in a funk with under four minutes left in the first half. After D’Mitrik Trice hit a long 3-pointer, the Badgers battled back with defensive stops, but it wasn’t enough to clinch a lead.

The second half was blown open with a second 3-point jumper from Aaron Henry, breaking his career-high. Henry finished out the day with six points and a new career-high 11 rebounds.

“I have to be who I am as a player and make the plays that I know how to make,” Henry said. “Just coming in and doing my job and filling my spot.”

Ethan Happ carried the Badgers back to a 52-43 deficit with 9:12 remaining with dominant positioning. Happ ended the game with 20 points, six rebounds and four blocks.

The Spartans picked up six turnovers in the second half, compared to the Badgers’ two. They made up for their mistakes down the court going 10-of-24 to shoot 42 percent the final half.

“The assists-to-baskets was really big for us,” Izzo said. “Whenever you get 18 assists on 23 baskets that means your guys are moving the ball and that’s the kind of team I have.”

Although the Spartans’ fast-paced play caused them some trouble, it also pushed them past Wisconsin’s unproductive offensive attempts, creating a 60-47 lead with 1:44 left in the game.

“I thought we played better defense in the second half,” Izzo said. “I thought the first half they missed some good shots but I bet you Greg [Gard] wasn’t happy with how they shot it. They’ve been a little bit up and down shooting.”

The Badgers went 2-for-19 from behind the arc and ended the game shooting 35 percent.

The Spartans ended the afternoon with a 67-55 win, and will compete in the Big Ten championship game tomorrow.

Winston led MSU in scoring with 21 points and six assists. Goins earned a double-double with 13 points and 12 rebounds.

“This team has put in a lot of work and the results are showing with those championships,” Tillman said. “Getting another opportunity to play for a championship, we’re going to have a fire lit under us ‘cause we want it that bad.”

The Spartans will move on to play at 3:30 p.m. ET against the winner of Minnesota and Michigan. You can listen to the championship game live on Impact 88.9 in the Lansing area.