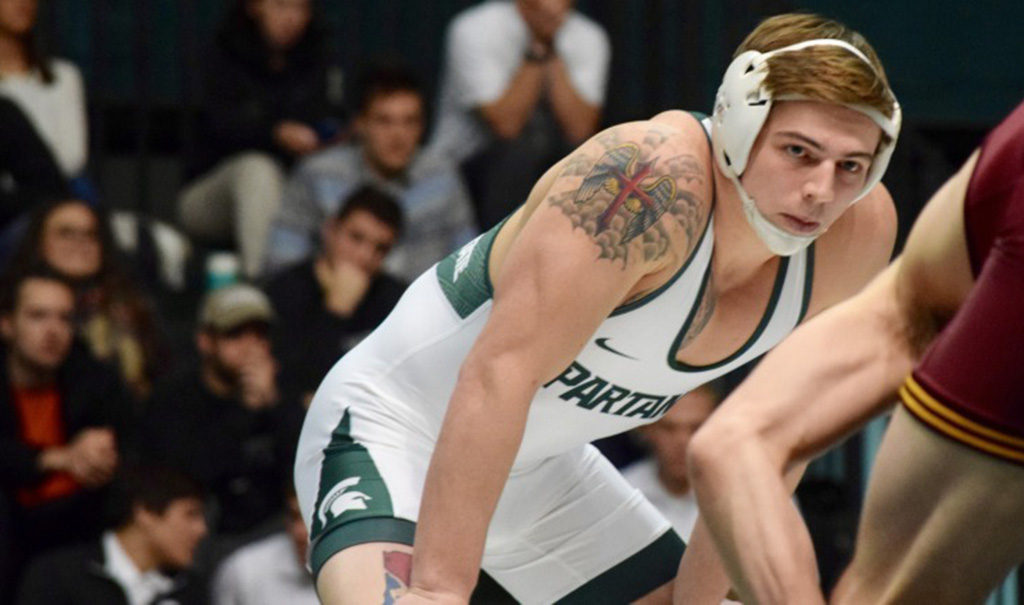 East Lansing, Mich. – The Michigan State wrestling team capped off the 2018-19 regular season with a 24-15 win over Central Michigan University on Senior Night at Jenison Field House on Friday.

Coming off two straight dual meet losses in a row, the Spartans looked to close out the regular season with a win over the Chippewas. The senior class got the ball rolling on a night that was devoted to them.

After an overtime dual loss by sophomore Rayvon Foley, redshirt seniors Anthony Tutolo and Austin Eicher rallied the Spartans to back-to-back decision wins in the 133 and 141 matches.

Tutolo entered the mat with determination as he added a two-point dagger in the final minute of the dual, ultimately winning the decision 7-2.

Later in the meet, redshirt sophomore Jake Tucker broke a 6-6 tie as he won his dual by a 5-3 decision with a crucial takedown in the final seconds to put the Spartans up 9-6 just before the half.

A few bouts later, redshirt sophomore Drew Hughes gave the Spartans their first comfortable lead of the night when he picked up a fall in just over a minute of the first period. Hughes’ victory in the 174 match would give the Spartans an 18-6 advantage.

“That was expected of me going into the dual,” Hughes said. “I knew what I had to do to help my team win and I was able to get it done.”

Hughes finished the season with 12 pins, an accomplishment he said has made for a great year.

“I can always do better,” Hughes said. “But looking at the bigger picture, the second half of the season definitely went a lot better than the first.”

Hughes stood as the only Spartan of the night with a fall until he was joined by redshirt freshman Brad Wilton, who clinched the Spartans’ win with a pin in just 15 seconds.

“There’s been one senior that has stuck it through from the beginning for five years and that was Shwan Shadaia,” Chandler said. “He didn’t get the opportunity to wrestle tonight. He’s been in between two weight classes and I wanted to put him out there, but from a strategy standpoint, Wilton was the right move.”

Chandler said despite his decision to sit Shadaia on Senior Night, he has truly admired his role on the team.

“Shwan is a team leader,” Chandler said. “He’s been here through the highs and lows and part of where we are as a program is because of his leadership and his ability to mentor these young guys.”

MSU will compete in the Big Ten Championships in Minneapolis, Minnesota on Saturday, Mar. 9.

“You always want to end the regular season on a high note,” Chandler said. “Our guys are continuing to see the progress they’ve been making all year as we head into the postseason.”