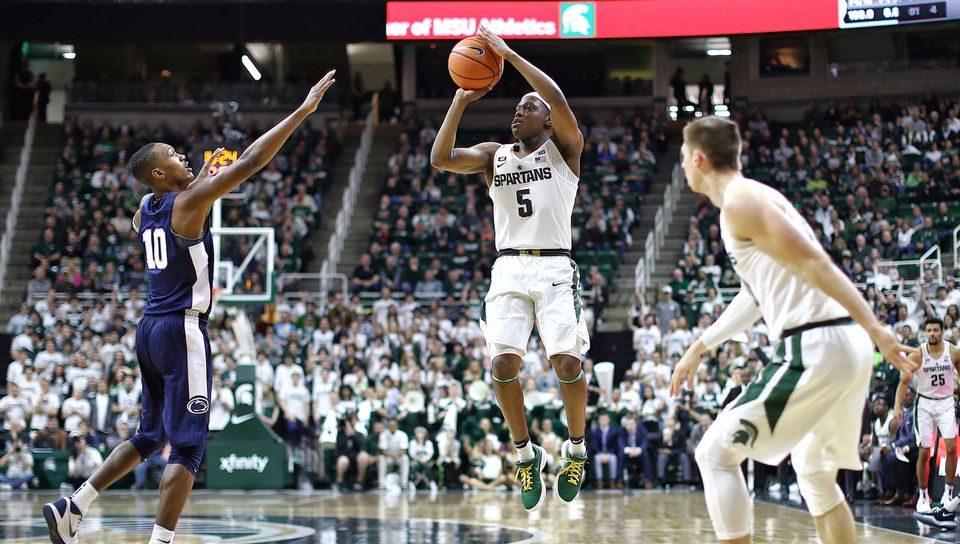 EAST LANSING, Mich. – No. 10 Michigan State and Rutgers met for only the ninth time in program history Wednesday at the Breslin Center. The Spartans sustained their undefeated record of 9-0 against the Scarlet Knights, ending the game 71-60. Michigan State is now 22-5 overall and 13-3 in the Big Ten.

“Considering what this team has been through, I thought it was a hell of a second half against a very tough team for us to play, especially right now,” MSU head coach Tom Izzo said.

The Spartans started out without one of their leading scorers, Nick Ward, due to a hairline fracture in his left hand that he sustained during the Ohio State game on Sunday. Sophomore Xavier Tillman stepped up on the court in his absence.

“I’m just going to trust all the work that I put in and let it showcase itself,” Tillman said.

Playing 33 minutes, Tillman scored a new career-high of 19 points while also collecting 10 rebounds, the third double-double of his career.

The Spartans got off to a slow start, struggling to produce offensively and going 0-for-7 in the first two minutes of the game. This slow stretch continued until Matt McQuaid fired a 3-point shot to get the crowd going.

Although Cassius Winston and McQuaid provided a combined total of 17 points in the first half, the sloppy passes and eight turnovers kept the Spartans trailing 32-25 to end the half.

“With Nick out, I feel like I’ve gotta take it upon myself to hold more people accountable and demand more without Nick on the floor,” McQuaid said. “I’m trying to get more out of the guys and myself.”

Geo Baker led the Scarlet Knights with 13 points in the first half. Rutgers shot 39 percent, while the offensively-hindered Spartans shot 30 percent.

Tillman made a splash after halftime, putting up six points in the first four minutes. Two momentous drives to the basket from Tillman and Winston put MSU just three points behind at 40-37 with 13:21 left in the game.

The true turning point for the Spartans was after a critical 3-point shot from McQuaid, which tied the game at 40 with 12:35 left on the clock.

“To be able to comeback on a team that’s so physical and so tough is really big for our toughness to show that we can out-rebound bigger teams,” Tillman said.

Tillman and Winston were on fire in the second-half, combining for 34 points. The energy on the court was contagious, as Kenny Goins also snuck in a 3-point basket with 6:44 to go in the game.

The Spartans were able to persevere thanks to Winston’s ability to drive lanes and draw fouls. Winston is the only player in the country averaging at least 18 points, seven assists and shooting at least 43 percent from behind the arc this year. Winston ended the night with 28 points, 19 in the second half alone, and eight assists.

“[We] stepped up,” Winston said. “We made plays and we found a way to win and that’s all you can really ask for.”

Michigan State will next head to Ann Arbor to face off with the rival Michigan Wolverines.

“It comes down to what team plays the hardest,” said Winston. “Both teams are really talented. Both team have really good players. But the team that plays the hardest is going to win the game.”

Tipoff is scheduled for 3:45 p.m. this upcoming Sunday.